On November 28, 2013, Hanukkah and Thanksgiving will overlap. Its the first time this has happened since Abraham Lincoln declared Thanksgiving a national holiday in 1863. The coincidence is quite rare due to the Jewish calendar slowly going out of sync with the solar calendar. According to one recent calculation, the dates wont match up this way again until the year 79,811. This once-in-a-lifetime dual holiday has been dubbed Thanksgivukkah by many American Jews, who will be celebrating both holidays at the same time. Turkeys and menorahs, sweet potatoes and dreidels, cornucopias and latkes oh my! Weve got one major party to prepare for.

At first glance Thanksgiving and Hanukkah are two very different holidays, but they actually have some things in common. Both holidays have components of gratitude; on Thanksgiving we are thankful for our blessings, while on Hanukkah we are grateful for the miracle of reclaiming the Holy Temple. Both holidays are celebrated with family gatherings and generations-old traditions. Of course, the most obvious common denominator is the food. During the eight day-long Hanukkah celebration, we eat food that is deep fried as a reminder of miracle of the oil in the Holy Temple. Fried latkes, keftes, bimuelos and sufganiyot make appearances on Hanukkah menus. For Thanksgiving, we have lots of traditional foodsturkey, stuffing, pumpkin pie, and more.

When developing recipes, Im often inspired by culinary history. Given that this is such a historical overlap, I decided to create dishes that honored the food traditions of both Hanukkah and Thanksgiving. This meant deep-frying a turkey for the first time and creating new types of latkes. My imagination went wild with possibilities.

Here are a few mashup recipes Ive developed for an irresistible Thanksgivukkah menu. No matter which holiday(s) you celebrate, these recipes would be creative and delectable additions to your autumn table. For more recipe ideas, check out my Thanksgivukkah recipe section and PBS Foods Thanksgiving and Hanukkah sections. 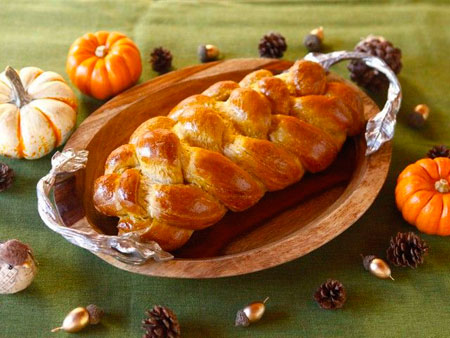 This challah is the result of a baking experiment that has since become one of my most popular recipes. I started with my standard challah recipe, then added pumpkin puree and played with the ingredients till I came up with the right balance of sugar, spice, and everything nice. Its sweet, but not cloying. The best part? It makes seriously delectable Challah French Toast. 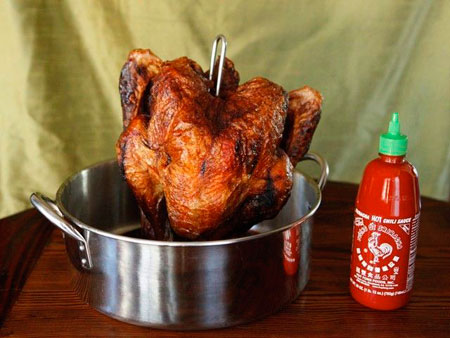 With this years convergence of the Thanksgiving and Hanukkah holidays, deep fried turkey seemed like the way to go. Many traditional Hanukkah foods are fried to symbolize the miracle of the oil in the Holy Temple. This year I’m preparing my turkey with a sriracha-infused marinade that is injected 24 hours before frying. The recipe results in a slightly spicy, moist and flavorful turkey. Not exactly traditional, but hey, it’s Thanksgivukkah! Also included is a recipe for Sriracha gravy, which you can make ahead using a stock from turkey legs or wings. 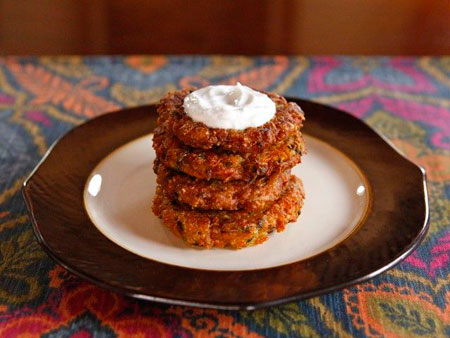 These latkes are a Hanukkah tradition with a delicious twist. Instead of potatoes, I subbed healthier zucchini and carrot shreds. I also added curry, allspice, cumin and cayenne to take the flavor to another level. The spices warm things up a bit. Theyre super yummy! 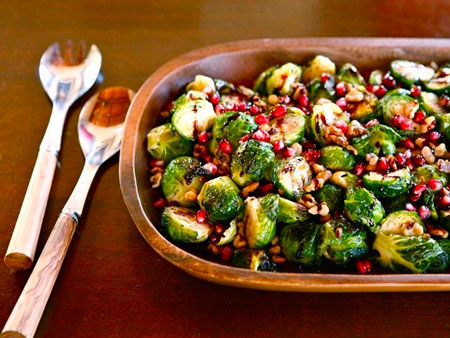 Brussels sprouts are a variety of the common cabbage, with several miniature cabbage-like heads growing around a stem. They are known by several names, including nobby greens, bonsai cabbages, or simply sprouts. Roasting Brussels sprouts gives them a crispy exterior and a tender, almost sweet interior. Here, theyre roasted and then drizzled with my homemade pomegranate molasses. With the addition of crunchy toasted walnuts and a little burst of sweetness from the pomegranate seeds, its a perfectly elegant side dish for your holiday table. 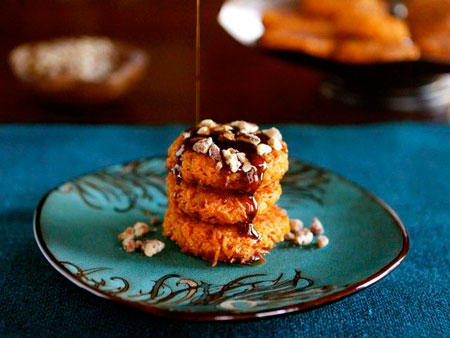 I prefer my latkes savory and salty, but Thanksgiving tradition calls for a sweet potato version. The good news is, these latkes can go both ways. Prepare them as written and sprinkle with salt for a crispy treat that veers toward savory; the latkes will have a bit of natural sweetness from the potato, nicely balanced by cinnamon, salt and a touch of curry. If youre craving a sweet dish, drizzle them with a simple brown sugar syrup and sprinkle with cayenne candied pecans. Prepare to swoon! 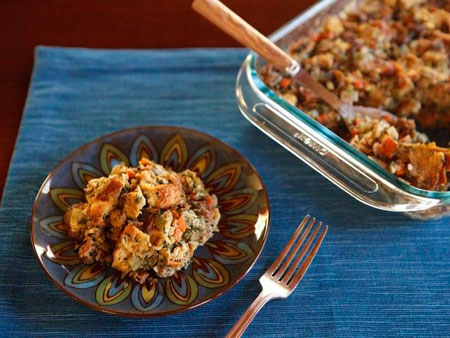 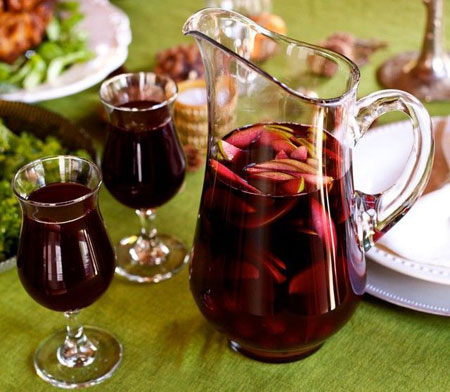 This sangria has become a yearly tradition on our Thanksgiving table. I love the warm flavor of spiced apple cider; its like the autumn season served up in a glass. When combined with pears, grapes and red wine it becomes truly special, a perfect drink to serving alongside your Thanksgivukkah feast. 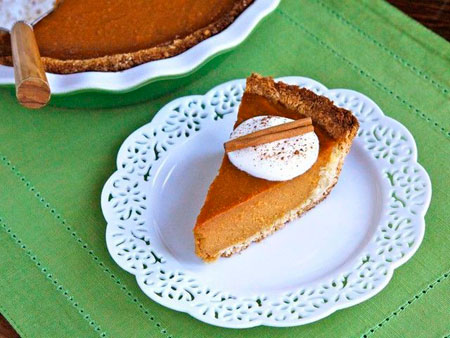 While contemplating several potential flavor combinations for Thanksgivukkah, none made me more excited than the idea of marrying two of my favorite desserts  coconut macaroons and pumpkin pie. This Coconut Macaroon Pumpkin Pie is gluten free and dairy free, which means it can be enjoyed by folks with various dietary restrictions. My kosher friends can also enjoy this after eating holiday turkey without being concerned about mixing milk and meat. I can honestly say with pride that this is the best pumpkin pie I have ever tasted. You wont even miss the old fashioned pie crust, promise!