At Berkeley: Reviews and Writings

Berkeley student protesters, in At Berkeley
January 10, 2014 | BY Craig Phillips
POSTED IN Uncategorized 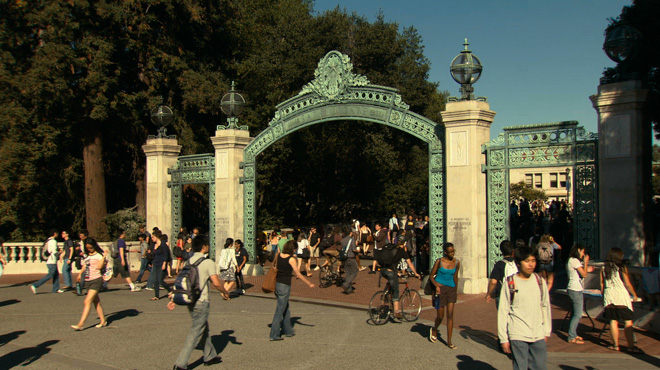 We’ve collected some of the best reviews and writings about Frederick Wiseman’s magnum opus, At Berkeley, which premieres Monday, January 13 on PBS [check local listings]. It’s a remarkable work that has inspired a number of prominent critics and film bloggers to muse about it. Here’s a sampling of just some of the more thoughtful critiques, as well as some of the numerous Best of 2013 lists the film’s appeared on:

In its refusal to identify anyone by name or job title, this four-hour film — Mr. Wiseman’s 38th institutional documentary since 1967 — makes a profound statement about democratic participation. It’s not the “me, but the “we,” that keeps democracy alive. From the humblest janitor to the most esteemed professor, everyone belongs to the same community and is equally important. The modern university is a complex organism that, to function efficiently, needs every component, including someone to cut the grass.

During one of the many scenes set in classrooms and laboratories in “At Berkeley,” Frederick Wiseman’s remarkable documentary on the University of California at Berkeley, a professor wonders aloud how our brains create our sense of time. The process is mysterious, he notes, since there’s nothing in our bodies or brains that perceives time: “It isn’t there, you know, to be perceived.” The filmmaker may have included this vignette as a sly joke, given our likely perception that his film, which clocks in at slightly over four hours, takes a lot of time to watch. Yet “At Berkeley” is more than the sum of its minutes. Narration-free and artfully discursive, it’s a one-of-a-kind mosaic portrait of a great institution struggling, under dire stress, to retain its essential character at a time of declining support for public education.

Wiseman’s films can be challenging to a first-time viewer because of their formal austerity and rigor (though once you start to understand his cinematic language, a sardonic sense of humor emerges). He uses no voiceovers, subtitles or talking-head interview clips to contextualize what’s happening on screen: His gaze aims for something as close as possible to fly-on-the-wall observation, with everyday crises and moments of tedium unfolding in chunks of real time. At Berkeley is four hours and four minutes long, which will not do much for its already slim chances of walking away with this weekend’s box office. But—while I think it’s perhaps best viewed broken up into two halves, if possible—I wouldn’t lose a minute of At Berkeley. If anything, it made me wish Wiseman had a weekly TV show that monitored the daily life of my alma mater… At Berkeley moves at an unhurried pace, but it’s never less than urgent in its curiosity about the gears that make this huge institution run.

The Berkeley we see in this film is both a singular institution and a microcosm. This is what must have attracted Wiseman. There is something immensely touching about the way the students are so roused by learning that we rarely hear them bemoan the dismal job market that awaits. A financial adviser tells one of the students, “Your education will never depreciate in value,” and the words do not ring hollowly. The fierce, questing intelligence of these students and educators is a perfect match for Wiseman’s own. Grade: A

Whether he’s shooting a field hockey game, a seminar on Thoreau, a lecture on the shifting understanding of cancer genetics or a group of workmen pouring cement in Berkeley’s football stadium, Wiseman captures the vibrant and diverse life of an institution in permanent crisis. … I should say here that “At Berkeley” had considerable personal resonance for me, because I spent much of my childhood on or near that campus and my father taught there for more than 30 years, and also that Wiseman’s films can be challenging for newcomers until you get used to them. In theaters all four hours of “At Berkeley” will be shown straight through, and while that’s rewarding it’s not the only way to watch it. Wiseman typically shoots more than 100 hours of video (he recently switched to digital from film) and then painstakingly edits down to the narrative he wants. It may not feel this way at first, but every scene in “At Berkeley” is in there for a reason, and I’m pretty sure that watching and rewatching the film in segments will reveal more thematic connections. 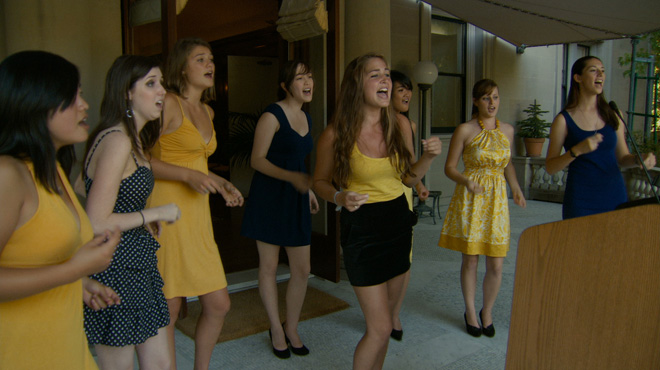 Some might feel that this sort of thing is nothing new for the director—he’s certainly used institutions as metaphors for the United States as a whole in the past. But this feels like one of his best pieces of work to date, as fully realized and satisfying a film as he’s made in the last 50 years. It’s a state-of-the-nation masterwork, a vitally important piece of work, and should be seen by as many people as possible. [A]

Surprises are rife. I went in expecting small human moments and was confronted by the highly theatrical performances people give in real life.

I can’t think of another film portrait of higher education that matches this one for comprehensiveness, intellectual depth, and hope.

Having already established an effective template for deconstructing and analyzing the complexities that comprise a functioning institution, documentarian Frederick Wiseman hones his craft primarily by digging deeper into the subject and making shrewder decisions about the juxtaposition of filmed observations to comprise a narrative. At over four hours, At Berkeley takes its time to consider the various perspectives, ideas and bureaucratic necessities that go into maintaining the core mission statement of the University of California, Berkeley, starting with surface observations about their quest to imbue students with discernment and critical thinking before dissecting just how this ideal is maintained.

The film reaches a suspenseful head in its last hour, as protesters occupy the library insisting on free or drastically cheaper education, despite everything Wiseman has already demonstrated about the complexities of institutional finance. The administration—full of aging radicals itself—struggles to pay lip service to impossible demands. If Berkeley is a utopia, it’s an unsustainable one, forever trying to reconcile the irreconcilable. In that respect, it’s quite different from At Berkeley: Every moment in Wiseman’s tapestry has a place, and there’s little in it that’s not absorbing, knotty, and provocative.

Meanwhile, footage of road-paving construction subtly mirrors Wiseman’s depiction of the way in which the university constantly reinvents and renews itself — logistically, politically, intellectually — through constant, engaged dialogue and debate.

Indiewire: The Best Documentaries of 2013

“…with four-hour epic “At Berkeley,” he’s made a late masterpiece, probably his best film in a few decades. Wiseman turns his all-encompassing, ever-observing lens to UC Berkeley, arguably the last great public university, and one that finds itself increasingly under threat from funding drops. The normally neutral Wiseman quietly makes this into one of his more dialectic works (while maintaining a certain objectivity at the same time), mounting an irrefutable argument for the benefits of higher education not just for the students, but for society as a whole.”

New York Times: (5 Movies You Need(ed) to See in Theaters), by A.O.Scott

“…a complex portrait of an institution in crisis. It can teach you more than just about any other film about the state of American life today, but you must give it your full, hypnotized attention.”

“It seems remarkable that Wiseman, rightfully heralded as this country’s preeminent chronicler of social institutions, had not until now tackled the American university… He offers an expansive meditation on the existential realities of higher learning today, and explores the friction between ideals and authority, as well as the responsibilities accompanying privilege in a country riddled with economic disparity.”

At Berkeley trailer on Independent Lens: