Filmmaker Samantha Grant on the Saga of Jayson Blair

Filmmaker Samantha Grant
May 2, 2014 | BY Craig Phillips
POSTED IN Arts & Culture
MORE ABOUT A Fragile Trust

“a remarkable film for its probing, its wealth of detail and testimony—remarkable above all, perhaps, in the clinical picture of its subject”  — Wall Street Journal

In A Fragile Trust, Samantha Grant explores one of the most infamous scandals in recent media history, the complicated but disturbing story of Jayson Blair, wunderkind reporter who disgraced himself and one of the world’s greatest newspapers, The New York Times, when it was discovered he had plagiarized numerous articles.

Grant, who takes a journalistic approach to documentary filmmaking, has produced and directed short films on subjects as varied as the black market trade in human kidneys in India, polygamy in Utah, and fair trade roses in Ecuador. A Fragile Trust, which premieres on Independent Lens on PBS Monday, May 5 at 10pm (check local listings), is her feature-length debut.  She spoke to us about the film in anticipation of the television debut.

What drew you to the Blair story and compelled you to want to make a film about it?

As a third generation journalist, and a journalism educator, I care deeply about the future of the profession. Getting people thinking and talking about the challenges facing journalism, while reinforcing the notion that we still need institutional journalism — even when it isn’t perfect — is why I’m doing this work. A Fragile Trust takes a deeper look into the mind of Jayson Blair and explores what caused this promising young man to make so many bad decisions, while also examining the institutional dynamics inside the Times that allowed Blair to continue in this way for so long.

My hope is to draw people in with an account of this fascinating story, and then keep them engaged long enough to explore issues of media ethics, media literacy, media responsibility, and media power in a deeper way.  With the widespread shift in the news industry from print to digital publishing, plagiarism has become as simple as a quick copy, cut, and paste, making the lessons learned in the aftermath of the Blair Affair more relevant than ever.

In your own experiences in journalism did you ever have to deal with anyone who came close to crossing the line ethically? Was plagiarism ever a concern for you and your colleagues?

My background in journalism is primarily as an independent, pitching and publishing work on various outlets. Since every outlet has its own slightly different code of ethics, this means that when I’m out there doing my own work, I have to be careful to make sure that everything I’m doing, in terms of ethical decision making and fundraising, would be suitable for any outlet. Plagiarism is much less common in the world of filmmaking than in the world of print media, simply because it’s so much harder to claim plagiarized work as original if it is visual. That said, I did once have an animator deliver something that certainly appeared to be clearly copied from something else. It was virtually identical!

What impact do you hope the film will have?

My hope is that this film, in combination with “Decisions on Deadline,” the companion game project that teaches journalism ethics in a fun and interactive way [more on that here soon], will cause an uptick in the national conversation about journalism ethics in the digital age, restoring public faith in the media, and the future of journalism.  I want to inspire people to start really talking about this (both the public and journalists) and I want to be part of the conversation. Beyond just talking, I am really interested in efforts to actually build a few tools that might help in some of these efforts.

What were some of the biggest challenges you faced in making A Fragile Trust?

The biggest challenge was simply getting the people involved in the scandal to talk to me on camera.  As you can imagine, everyone involved in this story would prefer never to talk about it again. It was a very difficult time for everyone at the paper and for Jayson. And raising money is always a huge challenge but I thank my lucky stars every day that organizations like ITVS exist to help us indie filmmakers turn our vision into reality.

How did you gain the trust of the subjects in your film, especially Blair himself?

The most difficult person to get on camera was Jayson. He did a bunch of press and TV appearances immediately following the scandal and then the release of his book, but after that he was more or less keeping a low profile. I first reached out to him using an email address I found online.  I wrote him an email and when he didn’t respond, I wrote him another.  I kept emailing him about once a week for a few months time until finally I found his home address online. When I found his home address, I wrote him again to say that I was coming to visit and that I’d really like to talk to him. That got his attention, and he did write back asking me not to invade his privacy. I didn’t end up going to his house, but I did keep writing him, giving him updates on the film, and from that point forward he’d occasionally write back.

Finally, he agreed to do an interview with me, as he says, because “I became convinced that while the documentary would hardly be flattering to me, it would provide the depth that would answer some questions that people had, including me.”

Do you think awareness of Blair’s story changed the way newspapers and other news outlets have approached the way they handle things editorially (fact-checking, management of writers, etc)?

A couple of different people in the film say that the Jayson Blair scandal caused all newsrooms to reevaluate the way they were doing business. I think the whole event was pretty terrifying for many major news outlets because it was such an embarrassment for the Times, and I imagine that most leaders would want to take stock of their fact-checking and plagiarism detection processes to be sure that nothing like this could happen in their newsrooms.

That said, I really want people to understand that what happened in the case of the Jayson Blair scandal is so unique and so specific to a certain moment in history (9/11, new leadership at the Times, beginning of the digital era) that it’s highly unlikely that anything like this could happen, on this scale, again. Also Jayson Blair is an anomaly. The vast majority of journalists out there are working incredibly hard every day to shine a light on the truth and to serve the public, and would never even think of doing anything like this.

Were there scenes you would’ve liked to include in A Fragile Trust that didn’t make the cut?

I really wanted to include more information about Gerald Boyd, the managing editor who lost his job as a result of the Blair scandal. Unfortunately, Gerald passed away before I had a chance to interview him, so I was reliant upon archival footage to build him as a character in the film. I was able to secure an interview with his widow, Robin Stone, and that only made me want to include Gerald in the film even more, but ultimately I made a creative decision to really stick to folks who were immediately involved in the scandal. That said, I truly believe the loss Gerald suffered as a result of the scandal — the loss of his job, his profession, his reputation — was profound and heartbreaking. He was, by all accounts, an excellent journalist and he did not deserve to have his entire career destroyed by the actions of a single rogue reporter. 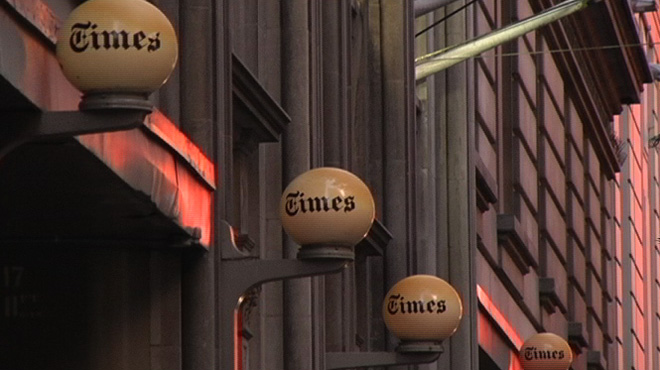 Tell us about a scene in the film that especially moved or resonated with you.

In order to make the film feel as authentic as possible, I went to great lengths to be as true to life as I could at every single decision point. What that means is that every document you see in the film is the actual document described. I also did my best to shoot in the actual locations where things actually happened. [Filming] inside Jayson Blair’s apartment for the scene where he unravels mentally was pretty surreal.  It was just strange to be there, filming that scene, in the actual space where he had been living as he was while losing his mind.

Has Blair finally watched the film?

As far as I know Jayson has not watched the film yet. In the beginning he said that the reason he gave me access was because he felt that the film could answer some questions that people had including him. But I think the deeper and deeper that we got into it the more painful the experience became for him and he has since told me that he never plans to watch the film. I do hope he will watch it because I would love to have a conversation with him about it and hear what he thinks.

What are some of your favorite films, documentary or otherwise?

The best documentary film I’ve seen this [past] year is Stories We Tell by Sarah Polley. I just love that film. It’s all about memory and storytelling and family and love. It’s beautifully poetic and very clever. It reminds me a lot of one of my all-time favorite narrative films, Eternal Sunshine of the Spotless Mind.

What can you tell us about your new project, Girls in the Forest?

I’ve been shooting Girls in the Forest in the deep heart of the Paraguayan jungle, with producer Carl Byker, for about five years now. It is a completely different kind of film than A Fragile Trust. Girls in the Forest is an intimate verité doc that tells the story of a small group of remarkable 15 year-old girls who are entering perhaps the most revolutionary high school in the world. The Mbaracayu Forest Girls’ School is located in one of only 250 UNESCO Biosphere reserves on earth, and is surrounded by a region of South America in which more than 95 percent of the forest has been burned to the ground to serve the needs of American agri-business giants like Monsanto and ADM.

The goal of the school, based on the concept of the girl effect, is to educate the girls in environmental stewardship, sustainable farming, pregnancy prevention, and business, with the idea that after a few years at Mbaracayu the girls will return to their villages and help preserve what’s left of their struggling communities. Part coming-of-age story, part peek into the hidden lives of these brilliant girls, the film follows the girls from their first day of high school through their graduation “coming out” day and beyond, as they are transformed by their experiences at the school and through their friendships with one another. We start editing next month. I’m so excited!

What advice do you have for aspiring filmmakers?

1) Never Give Up. 2) Support Other Filmmakers. 3) Keep things in perspective. Filmmaking is truly an amazing privilege, but it is not everything.

Listen to NPR story on the film.