As we kick off our celebration of Native American Heritage Month, we’ll be writing about two new Native American-themed films airing this month on Independent Lens (Indian Relay; Young Lakota), as well as looking at other Native American projects past and future.  First, an update on the subject of a film that The New York Times called “a detailed portrait of the kind of lives rarely given a media spotlight.”

Kind Hearted Woman is a pillar program of Women and Girls Lead, an innovative public media campaign spearheaded by the Independent Television Service [ITVS] that uses the power of documentary film to celebrate, educate, and activate women, girls, and their allies across the globe to address the challenges of the 21st century.  Now from the producer/director behind Kind Hearted Woman (which premiered on PBS on both Independent Lens and Frontline in April), we have an update on Robin Poor Bear, the film’s star.  [Note: If you missed it the first time around, you can check out both parts for free online here.]

David Sutherland writes: “Since the broadcast of Kind Hearted Woman in April, Robin has received several invitations to speak and share her story, criss-crossing the country this summer to meet with different communities and organizations. Darian and Anthony traveled with her and increasingly participate in some of their mom’s presentations. Darian also took the opportunity to look at some colleges, but is still undecided where she wants to attend. Robin took some time to send us a quick update to share with viewers:”

I was hired by Indian Health Services and a Tribal Police Department to do a presentation in May. We honored the officers there for the amazing work they do to take a stand against violence by listening. They also had a basketball tournament with the community, where the losers had to dye their hair red or blue. Afterwards, there was a youth pow wow where hundreds of community members showed up to support our sacred ones. It was made even more special when you would see a police officer walking around with that red or blue hair.

My trip to Miles City, Montana was amazing because they hosted an outdoor community meeting and concert. I did a talking circle for my presentation at the conference, and some boys from a nearby youth correctional facility were able to attend. The next day I visited the correctional facility for boys and spoke with them. I got to talk to a young man who shared his story with me and allowed me to share it with the staff. We talked and he shed some tears for the first time in 18 months, and after he said he hadn’t felt that calm in a long time.

I also went to Wyoming to visit a friend, and she asked me to speak with local middle school and high school students. There were over 500 all together, and it was so powerful to be able to talk to them and the staff. I will be doing a follow up with that community in October, and then again in April next year.

A tribe in Scottsdale, Arizona asked me to be a part of their gathering, and the first night we watched the first part of Kind Hearted Woman and discussed issue present in the film. The next day I did my presentation and it was just amazing to say the least.

Thank you to each and every one of the communities that have hired me to come and share my journey with them. It is hard to discuss the issues of domestic violence, sexual assault, chemical recovery and systematic letdowns. People have reached out and continue to reach out to listen, discuss and open the doors of healing for others.

Robin is also participating in a Kind Hearted Woman workshop at the National Women’s Studies Association conference this Saturday morning (November 9) in Cincinnati, Ohio, along with Women and Girls Lead staff. The workshop, entitled “Using Film to Confront Domestic Violence Crisis in Indian Country,” will examine the intersection of sovereignty, colonization, and violence against women on Native American lands.  [Brochure] 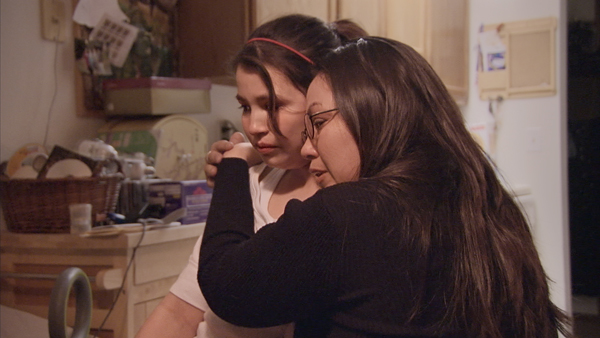 Note: The filmmaker established a fund for Robin and her family; if you’re interested in donating, you may do so here: