Meet the Mavericks of Science and Medicine

In 1847, Dr. Ignaz Semmelweis proposed a simple tactic: wash your hands. It’s difficult to imagine this as a medical “breakthrough,” but the Hungarian physician noted that when hand-washing was constant, contagion quickly and measurably plummeted. He experimented with antiseptic solutions, mistakenly assuming his idea would be embraced because it would save lives.

Semmelweis was outspoken, obsessive, unpredictable – and committed to an asylum by one of his own colleagues. While some speculated that he suffered underlying illness, scorn from fellow physicians made him more frustrated than crazy. The mockery outlived him, lasting until in the 1860’s Louis Pasteur confirmed that tiny pathogens caused disease.

Today, we applaud all manner of breakthroughs, but a sad truth throughout human history is how curious, provocative pioneers were more likely to be ridiculed, shunned, or even burned at the stake than rewarded. The more eccentric they were, the more famous many became posthumously – but from Galileo to Gregor Mendel, they were rarely heeded in their lifetimes.

The first instance of any idea from a “maverick” often sounds insane. But despite the enduring stereotype of the bespectacled man in a lab coat, scientists are never just one type of person, and a “breakthrough” is less a “Eureka!” moment than years-long dedication to testing hypotheses, and persevering through disappointments or naysayers to reach a point of discovery that changes the game.

The 2018 Nobel Prize in Medicine was awarded to immunologists Dr. James Allison and Dr. Tasuku Honjo for the discovery of the process that stimulates the immune system to attack cancer cells. Allison, the subject of Breakthrough, began his research in the 1970s, laboring for years on the vital details of T cells, even under the supervision of senior scientists who discouraged creative thinking in favor of rote laboratory grinding. When he developed an efficient antibody technique by the 1990s, pharmaceutical companies first turned him away. Today, medicines based on his work are the most successful cancer drugs on the market.

Allison’s brothers called him “hard-headed,” but were unsurprised by his diligence. An unwavering belief in oneself can be mistaken for obsession or oddity, but unconventional personality traits may be indicative of a person who resists rigidity, keeping their brain in the state of readiness to accept new ideas – even seemingly crazy ideas.

Albert Einstein famously wrote to children, often sending considerate replies to fan letters, admiring the imaginative thinking patterns of young brains. While he spent more time in advanced abstractions and professorial duties, he never lost sight of how the creative portion of his mind was best kept receptive. He felt the questions from children in their formative years kept him in this state.

Being offered a professorship at the University of California at Berkeley in 1985 was a jump start, providing new outlooks. Could Allison have unlocked T cell receptor secrets in his small Texas town where evolution was still being argued? Say what you want about what some call “Berserkly” – but as Allison’s former graduate student Max Krummel noted, “Berkeley is filled with very smart but freaky people… you don’t know what’s a crazy idea and what’s a great idea.” 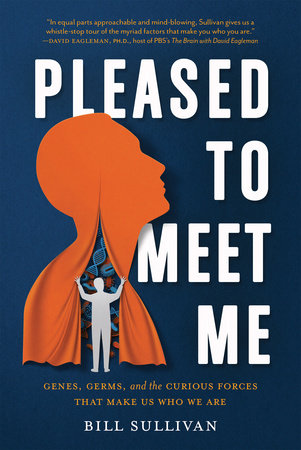 These aren’t mutually exclusive. The “crazy great idea” zone grows more populated every year, as evidenced by the massive list of 80+ breakthrough research projects noted in Dr. Bill Sullivan’s book, Pleased to Meet Me: Genes, Germs, and the Curious Forces That Make Us Who We Are.

Baltimore-born Dr. Sullivan of Indiana University’s School of Medicine, versed in pharmacology, genetics, neuroscience, and microbiology, gives a fascinating look at the breakthroughiest of breakthroughs in Germany, France, Britain, Ireland, Sweden, Switzerland, Spain, Italy, Canada, and the USA, brought to life with relatable references to Star Trek, Star Wars, Harry Potter, popular music, and even a captivating look at a never-before-seen gene mutation that may have allowed Ozzy Osbourne to live a heavy metal lifestyle over six decades that would kill most of us in a month.

As a man of breakthroughs, it was natural that he assembled our era’s interrelated triumphs of modern science:  “My laboratory likes to work right at the edge of where new knowledge is,” Sullivan told me. “We go where people aren’t looking. We team up with people who aren’t working on the things we are; we’ve made significant findings as we merged different disciplines.”

Nonetheless, he can relate to Jim Allison’s early days: “As a faculty member, you have only a few years to establish yourself or a university will say goodbye. There is immense pressure to steer away from risky research. You’re encouraged to be safe. After you get tenure, which can be 6 to 9 years, you can play in other areas. Fortunately, National Institute of Health (NIH) funding was good when I started in 2003. I was among the first parasitologists to study epigenetics… which wasn’t a household term.”

In an effort to understand our microbiome, and how we as hosts are affected by organisms we carry, Dr. Sullivan studies Toxoplasma gondii, which may hijack human brains, potentially dampening cognitive abilities and leading to bizarre behavioral changes. Intimately intertwined is epigenetics, the science of how the environment can change DNA, altering how genes work – possibly down through descendants.

One case Sullivan cites is a stunning 2018 study showing that a mother’s exposure to a particular chemical increased the risk of ADHD in her grandchildren. The way environmental factors alter gene expression has sweeping ramifications for alcoholism, obesity, aggression, and other things we believed were only a matter of personal choice. Entertaining any other result was unthinkable in traditional genetics, so acceptance has been glacial.

Epigenetics and microbiology may define the 21st century; alongside this reality is the equal danger that breakthrough discoveries may suffer episodes of the “Semmelweis Reflex,” named for our 19th-century hand-washing enthusiast, and which describes the knee-jerk tendency to reject new evidence because it contradicts established knowledge. One imagines this is the cousin of how “every disaster movie begins with a scientist being ignored.”

Safety isn’t any more likely to yield reliable results, and certainly isn’t known to be overly uplifting or motivational. Allison took the news of his impending Nobel Prize calmly, and was sedate at the award ceremony, but a thank you note from a woman whose husband’s life he saved from cancer made him cry. Seeing such contrast, I asked myself, would I want Jim Allison and Patch Adams by my sickbed, or those stuffy doctors in medical dramas always telling the interns not to chase zebras?

Imagine if Alfred Russel Wallace had stayed “safe” instead of braving the wilds of the Amazon and the Malay Archipelago to pioneer biogeography and speciation, or if Charles Darwin – who initially studied Anglican theology – followed the “safe” course advised by his father to be a country parson, instead of asking the crucial questions of natural selection or evolution.

Harvard biologist Dr. Jerry A. Coyne, himself a maverick for his activism, declared the controversy over, saying evolution is “the foundational concept of science.”

Many controversial thinkers of yore thus come to be considered cornerstones, but it’s a long journey – partially because some fringe mavericks turn out to be wrong, such as the disgraced Andrew Wakefield, who continually insists autism is caused by vaccines, even after his medical license was revoked for falsifying research.

History is also full of extremists who experimented on unwilling subjects or insisted some type of magic was a science – though “wrong” mavericks don’t suffer the Semmelweis Reflex, because they didn’t necessarily understand the science to begin with.

There is a balance to be struck between embracing new possibilities and remembering we must always follow genuine evidence. One hopes a growing acceptance of different personalities, and repudiation of stereotypes, allows new scientists to flourish in their quest to solve real-world issues: like Allison, unafraid to play the harmonica in public on his nights off, or like Sullivan, pioneering the use of pop culture to teach science. Eccentricity isn’t a disqualifier for being an astute researcher who can improve people’s lives.

Between watching The Goonies and quoting Yoda, Dr. Sullivan emphasizes the seriousness: “I’m in the trenches. Mother Nature does not give up secrets easily. Science takes a great deal of work, along with all the dead ends and obstacles. Drug discovery is incredibly hard. I don’t think the general public understands how difficult it really is.”

Many of us will spend our careers outside those trenches, memorizing what others discovered. Genuine leaps more often come from the maverick willing to dismiss traditional wisdom. And we should also perhaps take care in finding out what is important to such unconventional thinkers.

Sullivan concludes: “If anything comes out of my lab that will be a cure for toxoplasmosis, I’m gonna Jonas Salk it! It will be free. Our research is funded by taxpayer dollars. I don’t understand those who are looking to get rich. No one should reap obscene profits, as often happens in medicine.”

In today’s world, that alone might make him a breakthrough maverick.

Medscape WebMD LLC / Doctors and Nurses: Wash Your Hands (Even if No One Is Looking)

Sullivan, William J. Pleased to Meet Me: Genes, Germs, and the Curious Forces That Make Us Who We Are. Washington DC: National Geographic Partners, LLC. © 2019.

Heather Archuletta is from San Francisco, and has degrees from Mills College in Oakland, and the University of London, England. After working in the tech industry for 17 years, she joined a NASA program for space flight simulations, which studies the long-term effects of weightlessness on the human body. These projects help Johnson Space Center scientists learn more about how to keep astronauts healthy in space for long-duration flights, and she now works to find other qualified applicants for the programs. Her “Pillow Astronaut” blog, which describes the flight sims in both personal and medical detail, has been featured in Wired, Popular Science and FOX in America, as well as news outlets in Europe, India, Scandinavia, and Russia. Read more about Heather’s participation in NASA “bed rest studies” here.

Filmmakers Clayton Brown and Monica Long Ross talk about the evolution for We Believe in Dinosaurs and telling the story in a balanced way.

Women of the Space Agency

Space race expert Heather Archuletta looks at some of the unsung women who made space travel possible.
Please review our comment guidelines.