Mush! One Day in the Life of a Dogsledder

December 05, 2019 by Independent Lens in Beyond the Films

Writer and dogsled racer Blair Braverman, who spent two summers working as a dogsled guide on a glacier in Alaska, also wrote the acclaimed book Welcome to the Goddamn Ice Cube, which was a memoir of her childhood and northern adventures that the NY Times called a “stunning and sharp first book”; it looked at not just coping with blizzards, isolation and wild animals, but also sexism and violence faced by women adventurers entering a male-dominated field like dogsled racing.

Blair wrote to us that “George Attla was a legend who helped revitalize mushing in Alaska. He led the way–literally–and brought so much care to the sport and to his community.” She contributes for us here a vivid “day in the life” diary of a musher in Wisconsin, to capture the experience of training sled dogs.  -ed.

Last spring I ran my rookie Iditarod, which was astounding—and after an intense few years of racing throughout Canada and Alaska, I’m spending this winter close to home in northern Wisconsin, working with my dog team to build endurance, have fun, and explore the Northwoods together. Many of my dogs are yearlings—last year’s puppies—and this is their first winter training with the team, so I’m keeping things exciting and trying to give them as many new experiences as possible. Our days together look something like this.

My dogs live outside year-round, so they build up a thick fur coat, just like wolves, that keeps them comfortable in the winter. But one challenge of cold weather is that they can’t have constant access to liquid water like they do in the summer. For that reason, I like to start their mornings with a drink that a friend nicknamed “meatorade”—it’s tasty, so they drink it before it freezes, and it keeps them hydrated for the day’s activities. I soak scraps of venison and ground beef in a bucket of hot water until it forms a rich broth, then divvy it up with a ladle, making sure all the dogs get their share. I also like to give them a little snack, often a piece of bear fat, to start their day.

While the dogs are stretching and playing, or napping on their houses, I patrol with a shovel for my first poop scoop of the day. I know that Grinch won’t be running, since he’s a bit older and has arthritis in his wrists, so I bring him into a fenced-in playpen with his friend Refried so they can have some gentle fun.

I’ll be tired after running dogs, so I usually take a few hours in the morning to do other work: writing, editing, answering emails, and so on. I keep an eye on the dogs out the window and wish that I was outside.

Puppy walk! We only have one puppy this year, so she gets lots of one-on-one attention. Right now we’re practicing recall, so I put some treats in my pocket and we take a walk in the woods.

My husband Quince Mountain and I manage the team together, and we decide that today’s run will be a short 16-miler with the dogs pulling an ATV. There’s not quite enough snow for sleds, and the ATV is nice because it has good stopping power, which makes it a safe option for a big team. He brings the dogs some more fresh water and puts on their harnesses while I get the gangline ready.

When all the dogs are harnessed, we take a deep breath and start walking them to the gangline. This is when the chaos starts! The dogs are frantic with excitement when they know that they’re about to run.

We walk our leader, Pepe, to the line first—she knows exactly how this goes—and bring out the yearlings last, since they’re the most likely to annoy their running partner or bite through their harness in excitement. When they’re all ready, I give the command: “Ready? All right!” In a split second, the noise turns to silence as the dogs surge forward together.

Dogs breaking trail through a foot of fresh snow, Pepé and Willow leading the way. pic.twitter.com/N6ci4b5Fgs

The run takes about an hour and a half, and the dogs are much calmer when we return. It’s a short run; when we’re training for long distance, we’re often on the trail for hours, or even for days at a time. The sun is low but it’s still daylight.

One of my yearlings, Jules, can absolutely vibrate with energy before his runs, so I make sure to get some cuddles in while he’s pleasantly tired. He pushes his head into my coat and slobbers on my face.

The dog’s main meal is a mix of venison and Caribou Creek, a high-performance kibble that our friend Lloyd Gilbertson makes. I also give each dog a deer bone with meat on it for dessert. The bones are a good source of calcium, and some of the dogs start chewing immediately, but some of them are more interested in hiding their bones from each other than in actually eating them.

It’s getting dark, so it’s time to bust out the headlamps. The dogs watch us scoop poop and do farm chores. Tonight’s task is rebuilding a fence by the barn. Every now and then, while I’m working, I do a little dance for the dogs and their ears all perk. I think they like watching us do chores. It’s like dog TV.

By the time chores are over, it’s been dark for hours. I like to sit on the dogs’ houses with them at night. It reminds me of all the nights we’ve camped on the trail together, all the places we’ve explored. Today was a simple day at home, but it’s all part of building a routine that will help us travel the wilderness together. When the dogs throw up their heads for their evening howl, I join in. I think it embarrasses them when I try to sing along, but I don’t care. I do it every time. 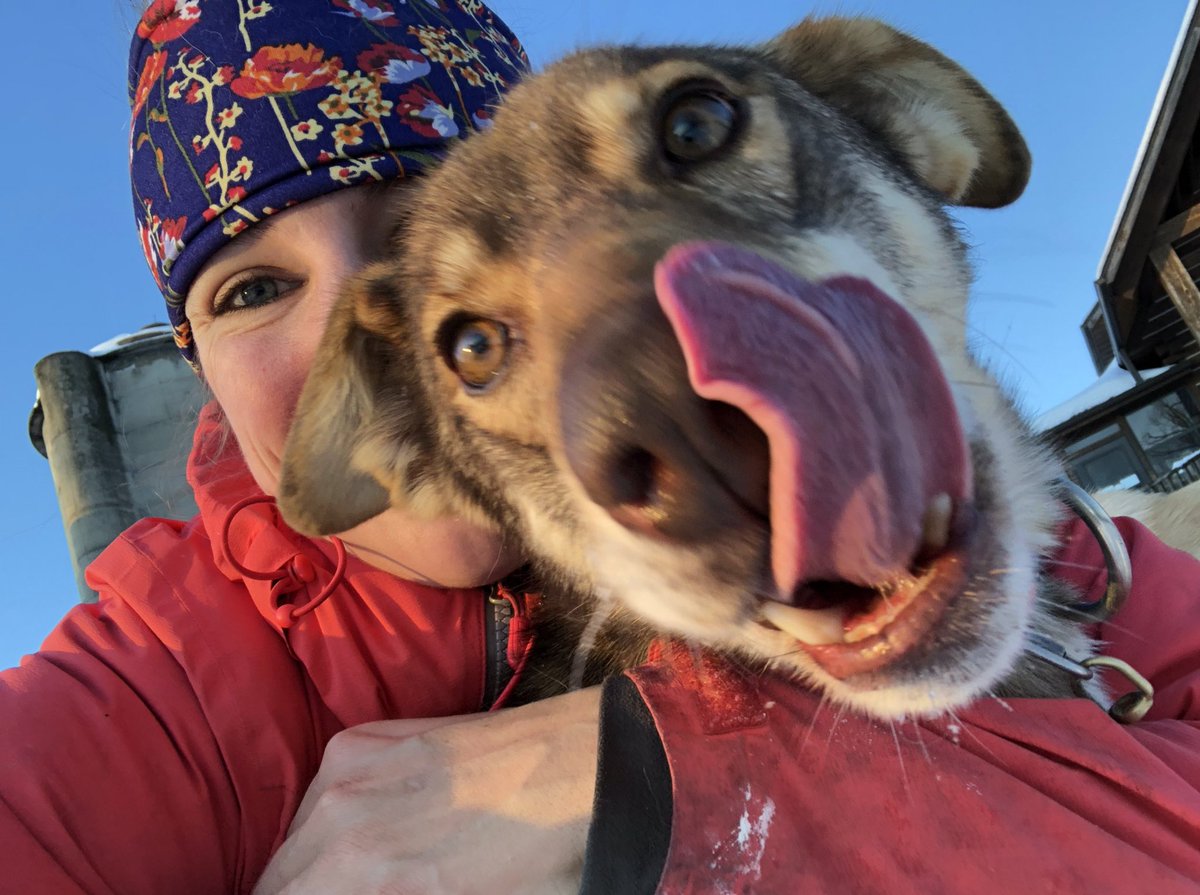 Blair Braverman is an author, dogsledder, and adventurer who uses innovative storytelling to make the outdoors accessible. Her journalism and essays have appeared in Smithsonian, The Guardian, This American Life, and elsewhere, and she is a regular correspondent for Outside magazine. She completed the 2019 Iditarod, a 1000-mile dogsled race across Alaska. She recaps her life with dogs on her Twitter at @BlairBraverman

A Day in the Life of a Rural Doctor, When No Day is the Same