Pollution (and Other Environmental) Public Service Announcements: A Look Back

In conjunction with the Independent Lens film What Lies Upstream, which is an exposé about what led to a major source of water becoming poisoned after a disastrous chemical spill and the government’s response thereto, take a trip down memory lane to look at how we used to warn people about pollution, chemicals, and other environmental hazards.

Ever wonder where the messages we call PSAs (public service announcements) come from? It’s a curious piece of broadcasting arcana. An agency called the War Advertising Council was created as a means to influence American society during World War II. Its name was later shortened to “Ad Council,” with all of its funding coming from government and nonprofits.

My digging showed that some of the funding behind the sponsorships of these PSAs exposes a little dirt. When the Clean Water Act (which helps protect drinking water for one-third of Americans) passed in 1972, we began to see an uptick in anti-pollution PSAs, particularly about water pollution. During this time, the Environmental Protection Agency (EPA, which is in the news again these days) released a series of ads to encourage consumers to take advantage of consumer confidence reports and other information about their drinking water.

It is during this era, alongside classic 1970s anti-drug campaigns (stay away from those creepy magicians, kids) and “Mr Yuk Is Mean” poison-prevention PSAs, we also find a surge in EPA-sponsored ads warning us not to get “duped” by “gas guzzlers.” We begin to hear the repetition of the following phrases: “Keeping America beautiful is your job”; “Stash your trash”; “Bit by bit, every litter bit hurts.”

Given what we now know about the current state of affairs at agencies that sponsor these PSAs, such as the EPA and the CDC, perspective on the messaging may feel different at the moment. “We are going to end the EPA intrusion into your lives,” said President Trump last February, signing an executive order calling for the EPA to review and roll back the Clean Water Rule.

This Clean water PSA  sponsored by the Coast Guard and a fiberglass company is unwittingly hilarious, especially considering how much more we now know about fiberglass as a source of toxic pollution.

One of the scariest water-related PSAs that we found isn’t anti-pollution, it’s anti-drowning. Which is something everyone of all political stripes can agree is bad. This is a British PSA voiced by creepy actor Donald Pleasance.

This makes for a good segue into the “America the Beautiful” campaign. More widely known as the “Crying Indian” ad, this is the quintessential segment that deftly dodges corporate onus for chemical waste pollution.

The central crux of this message conveyed that the average American can and should shoulder the burden of caring for our lakes, rivers, streams, wetlands, and coastal areas.

What gave rise to the passing of the Clean Water Act in the first place was less about American citizens being sloppy with their soda cans and more about corporations like DuPont (now rebranded as Chemours) dropping thousands of tons of chemical waste into rivers; for example, in North Carolina.

But still, America the Beautiful insists that “Some people have a deep, abiding respect for the natural beauty that was once this country…” a deep voice scolds… “And some people don’t. People start pollution. People can stop it.” Which parallels the famous “Guns don’t kill people, people kill people” mantra of the NRA, but I digress.

This PSA harkens back to a time when chemical companies more brazenly wanted us to love and embrace their chemicals like the totally “harmless” DDT.  Hey kids, let’s enjoy our DDT! Why it’s so safe you can eat it.

No state of the union would not envy this campaign from the Texas Department of Transportation. Credited with reducing litter on Texas highways by roughly 72% over four years, road signs on major highways, television, radio and in print took the “Don’t Mess with Texas” stance. It all began with a series of bumper stickers and peaked at the premiere of a TV advertisement featuring the swagger of blues musician Stevie Ray Vaughan and The Fabulous Thunderbirds.

The 1970s brought about the era of what I like to call “the finger wag” PSA. These hammer home the message that it is individuals tossing garbage about willy-nilly that cause poisoned streams and rivers. Again: “People start pollution. People can stop it.”

This one serves up more of the same. Over a map of the US made entirely of matches we hear a male voice intoning that “One second with a match and ‘America the Beautiful’ becomes America the ugly.”

In a series from the early 1960s, the National Forest Service came out with a straightforward message meant to educate the public about forest fire prevention.  Narrated by the Twilight Zone’s Rod Serling, the PSA shows hapless family man Ed Morgan driving his family home from vacation only to carelessly toss a match and become a “careless killer.”

In the 1970s PSAs targeted Saturday morning TV cartoon-watching kids, bringing more messaging about forest conservation and fire prevention. In this ad, a songbird raccoon with a voice like Joni Mitchell implores us to be careful with matches. Rita is fixed in the minds and hearts of many children of the late 1970s. “Rita needs a remix!” suggests one YouTube commenter. “Now forest fires are blamed on global warming.”

This era also brought a coterie of other woodland creatures including, famously, Woodsy Owl:

The perennial favorite and well-loved Smokey Bear is the longest running career of any of the Forest Service woodland mascots. I mean, who doesn’t love a talking bear?

The first ad we can identify is circa 1962.  The 1970s gave us an even groovier remix of Smokey Bear. But my personal favorite is when Smokey teams up with Betty White for a zany rendition of the same old song about preventing forest fires:

I WANT MY MTV

When MTV first tickled our environmental consciences they used the unparalleled animation stylings of Bill Plympton in this PSA about acid rain.

Interesting that this wordless ad conveys the perils of living with acid rain loud and clear, but what’s missing is a call to action or message about what anyone should do about it.

This signals a very different era from the 1960s and 1970s when the message was that individuals ought to be stewards of the natural world.

Now you: What were some of your favorite environmental PSAs growing up and how do you think they’ve aged since then? What kind of impact did they have on you? 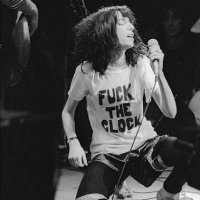 Jennie Z. Rose is a freelancer in solutions journalism. She writes about filmmakers, explorers, educators and social entrepreneurs.
VIEW ALL POSTS BY Jennie Z. Rose
Please review our comment guidelines.