The History Written on our Faces 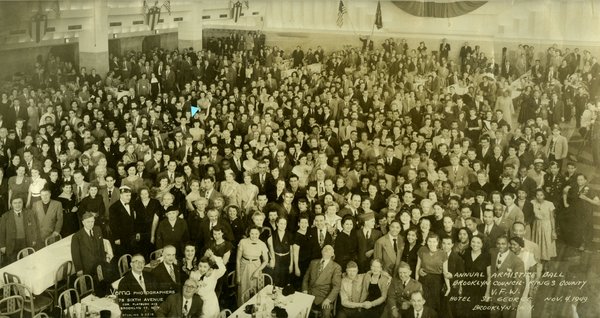 1949: Four years after the end of World War II. My parents had only recently met. Through dances and other socials like the Annual Armistice Ball, war veterans were finding their future wives and husbands and reintegrating into civilian life. People were celebrating all across the American Empire, from the Caribbean to the Pacific, Puerto Ricans among them. Having served in the American armed forces, they were returning to their families in Puerto Rico or New York, where they became part of the Great Migration.

My mother had established a foothold in New York after working to bring her own mother and most of her siblings stateside from Puerto Rico. In 1949 the first democratically elected Puerto Rican governor took office. Operation Bootstrap, aimed at industrializing the island, was only beginning. My mother Maria Antonia Torres was ready for a new life.

My father Mariano Virgilio Escalona had journeyed from the East after his father, an officer in the Philippine Army, was beheaded during the Japanese occupation of the Philippines. He sought new opportunities to help support his mother and siblings from afar. Filipinos have a term for those compatriots who go abroad and provide for their families -- balikbayan. My father was a balikbayan when he met my mother.

The history of these times is written on the faces of my Puerto Rican family.  Eight of us look Eurasian. My mother’s sisters, Titi Celia and Titi Julia (“titi” means “auntie”), also married Filipinos. People imagine we are related through our Asian side because of the way we look.

My mother and her two sisters jointly purchased a three-story row house on Bryant Avenue in the Bronx, each occupying a floor with her husband and children. We spent the first ten years of our lives together in what might be considered an early co-op. Our households exemplified Puerto Rican matriarchal rule, with our Filipino fathers usually away at sea. Uncles Sammy and Andy were lifers in the U.S. Navy and Coast Guard; my dad was in the U.S. Merchant Marines.

The Escalonas occupied the first floor with ready access to the porch and backyard. My brother and I spent a great deal of time playing outdoors.  My mother was a strong believer in the health achieved by basking in the sun and breathing fresh air.

The Evangelistas lived on the second-floor. When not in church, my two cousins passed the time on their fire escape and on religious outings. Titi Celia had converted to the Pentecostal faith in the late fifties. My grandmother Uquita, our great matriarch, lived with them.

The Julatons moved into the third floor where the previous owner left an old upright piano. Titi Julia had been married before and brought her four Puerto Rican children to live with her and her four half-Filipino girls.  Uncle Andy did not seem to mind. These older cousins sang Doowop and R&B. They played conga, guitar and piano. They taught their younger sisters to sing and dance to the latest Salsa, Soul, and Rock. I still remember the great fiestas Titi Julia threw during the holidays. The entire Torres clan would turn up.

Puerto Ricans thrived in New York. Many moved to the suburbs, others bought homes in Puerto Rico. Six of my aunts and uncles relocated to the island after retiring or saving enough to start a small business. My Uncles Gallardo and Eduardo owned barber shops in the Bronx and returned to Puerto Rico to open shops there.

The Julatons were the first to leave our co-op, returning to Puerto Rico in the late sixties as part of the reverse migration. I was too young to remember their sorrowful farewell, but old enough a decade later to suffer the departure of the Evangelistas.  My mother bought her sisters’ shares and eventually lost the property to urban blight. We lived in what came to be known as Fort Apache. It almost cost my parents their lives.

Our neighborhood had been a mix of Jews, Italians, West Indians, African Americans, and ever-increasing Puerto Ricans. My best friend Fishy, Raymond Alvarez, was Puerto Rican and Cuban. He lived across the street from us. Fishy’s father emigrated from Cuba because of growing political unrest there. Most of the homes on our block were privately owned and our street was paved with red brick. Our family doctor made house calls and had his office in a beautifully appointed apartment building at the corner. This was our world before the city’s economic crisis devastated the Bronx.

How different we may have seemed to our neighbors is unclear because the neighborhood was diverse and our family formed its own little society or enclave.  We seemed more Puerto Rican than Filipino though we looked Asian. We seemed more American than Puerto Rican because our education and most of our cultural references were American. We enjoyed hamburgers, hot dogs, and French fries. We savored meals with platanos maduros, bistec encebollado and arroz con habichuelas. We relished pork adobo, pansit, and ginger chicken soup. When our fathers were home, we feasted on foods from both sides of the empire and some American dishes too. Like New York cut steak, medium rare, with a dash of ketchup, accompanied by slices of buttered French bread, and washed down with ice-cold Seven-Up. A favorite dish of my dad’s and mine too—though today I rarely eat steak or drink soda.

Some of us still live in the Bronx, but all the Puerto Rican-Filipinos are gone.  My parents eventually moved to Long Island. I wound up on Manhattan’s Upper West Side, going to college. My brother joined the service.

Many who first arrived from Puerto Rico have passed away but not before seeing an increasingly diverse generation of Puerto Rican-Filipinos. My niece and five nephews are Puerto Rican-Filipino and Polish. Most are married and have their own children, adding Mexican and Chinese to the Puerto Rican mix.  The history of these times is written on their faces too.

Judith Escalona is a filmmaker, writer and gallerist. She is currently editing a feature film she wrote and directed entitled Bx3M, the story of three Latino youths coming of age in a city going up in flames (www.bx3mgrowingupfast.com).  Escalona also wrote and directed The Krutch, starring Jaime Sanchez, a surreal film about a Puerto Rican psychoanalyst with an identity problem.  She is the Founder and Executive Director of the award-winning website Puerto Rico and the American Dream (www.prdream.com), an online resource on the history and culture of Puerto Rico and the Puerto Rican Diaspora. PRdream’s office is located in Spanish Harlem where the organization has launched several new media initiatives, including the digital gallery MediaNoche (www.medianoche.us).  MediaNoche features local and international new media artists. Escalona is a Segment Producer for Independent Sources, a CUNY-TV show that examines news from the perspectives of the ethnic press.  Changing Color on the Great White Way, a segment she produced, won first prize in the Ippies Awards for Best Video 2010.  Judith Escalona teaches filmmaking at The City College of New York.