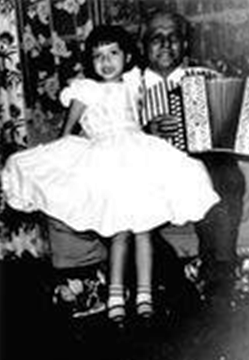 I met my grandparents for the first time in 1958. They came from the mountains of Lajas, Puerto Rico. A toddler living high in the towers of the projects of New York, my grandfather asked me to bring over the curious black box he had with him. He unsnapped the leather straps, slipped his hands through both loops on each side and stretched it open. My mouth opened and my eyes widened as I heard life breathe from the crinkled accordion skin. An uncle pulled out a cuatro, a cute little guitar with ten steel strings in five pairs.

A guitar appeared. Two spoons placed back to back were put in my small hands while a pair of maracas rattled.

No matter where you’re from, just listening to our folk music transports the soul to paradise. Here in New York aluminum may replace banana leaves for pasteles; chicken swaps the pork filling; pine trees and sirens substitute palms and coquis; projects and ghettos take the place of mountains and pueblos. But nothing replaces a tipico parranda, our caroling of Christmas nostalgia that has somehow managed to navigate through the Internet into the hearts of the humble.

I heard the cuatro again in the ‘70s where our national instrument harmonized and sang with Hector LaVoe. Up until then we had looked at the music from our childhood as something "hickey." But this new combination of young Latinos playing with the iconic Yomo Toro was different. It spoon-fed us abuelita's words of wisdom while filling us with the joy of simple pleasures that some of us in New York only heard through the twang of Yomo Toro's cuatro singing through Hector's words. Yomo made them famous.

That music broke through the popular British rock movement, R&B and boogaloos that ruled inner city kids of the '70s.

The Moors introduced guitars to Iberia (Spain) and by the sixteenth century the four stringed lute-like instrument traveled to Puerto Rico with the Conquistadors. It was baptized "cuatro," christened with an additional string and made from one piece of native wood "guaraguao" used by indigenous Tainos. Its five strings were doubled to better parallel and harmonize with an accompanying guitar.

Inherently musical, Puerto Ricans-- like the cuatro --emerged from the influences of three distinct races where music and dancing is nourishment for the soul. The blending of Spanish décimas (ten-line poems), African percussion and Indigenous güiros and maracas paralleled the fusion of the races, bringing forth plenas, bombas and Aguinaldos.

The root lies in the "Aguinaldo" (literally meaning a gift); a poetic song form founded in Spanish couplets. A descendent of the Spanish villancico Christmas carol, the troubadour leads the chorus in a spirited call and response.

From Thanksgiving until eight days past twelfth night Puerto Ricans celebrate las octavitas where groups of musicians and singers hold trullas (or parrandas). It is, in essence, an improvised, mobile party with the trappings of a carnival making the rounds from home to home singing, dancing, asking for gifts on Christmas Eve and on the Epiphany the day of gift giving throughout Latin America. January 6, the day of the Kings.

I remember the Kings: Gaspar, Balthazar and Melchor; the Spanish King, the African King and the wise old Asian King who somehow managed to come to New York's El Barrio on camels leaving presents under our beds. My mother had us gather dry grass, even if we had to dig under snow, put it in a shoebox along with water for the King's camels. I asked how could Camels come to the projects in New York? Incredulous, my mother looked at me and said, “You believe a big fat white man got here two weeks ago and brought you those skates right? You can believe in the kings and their camels.

When I awoke that 6th of January a brown paper bag filled with candies, crafts and trinkets was tied around my wrist. Stories of the three ages and races of the Kings were told to us accompanied by the music that brought poetry, values and history to our hearts. The lyric melodies of the cuatro always seemed to be there, subtle, unassuming, like a best friend, sharing our parent's nostalgia and melancholy while fueling our revelry of song. We sang and danced until, like our ancestors, we dropped from exhaustion.

Seasonal or all year round, the music of our folklore through the cuatro is an expression of the heart of Puerto Rico played with the gallantry and excitement that intricately weaves the cultural mosaic of the Puerto Rican "race." It is the heirloom we leave to the future in the hope that they can keep the innocence of our humanity alive.

With every parranda we pass the torch of three races wrapped in the richness of three cultures, to a new world of children.

We bequeath the trilogy of old world values ensconced in the symbols of the Kings' gifts: gold, a tribute to our inherent royalty, frankincense, a keepsake of our spirituality and myrrh, a bitter reminder of our humanity.

Our folk music embraces these living emblems of our existence, bringing joy to our lives.

This music took me to where I came from. It helped me understand the traditions of my grandparents. It gave me the strong foundation that helped me survive the temptations of the 70s, the confusion of the 80s, the greed of the 90s and the chaos and trauma that has become this millennium. No matter where I was born or what language I speak, I am Boricua, an urban jibara, a Puerto Rican in New York.