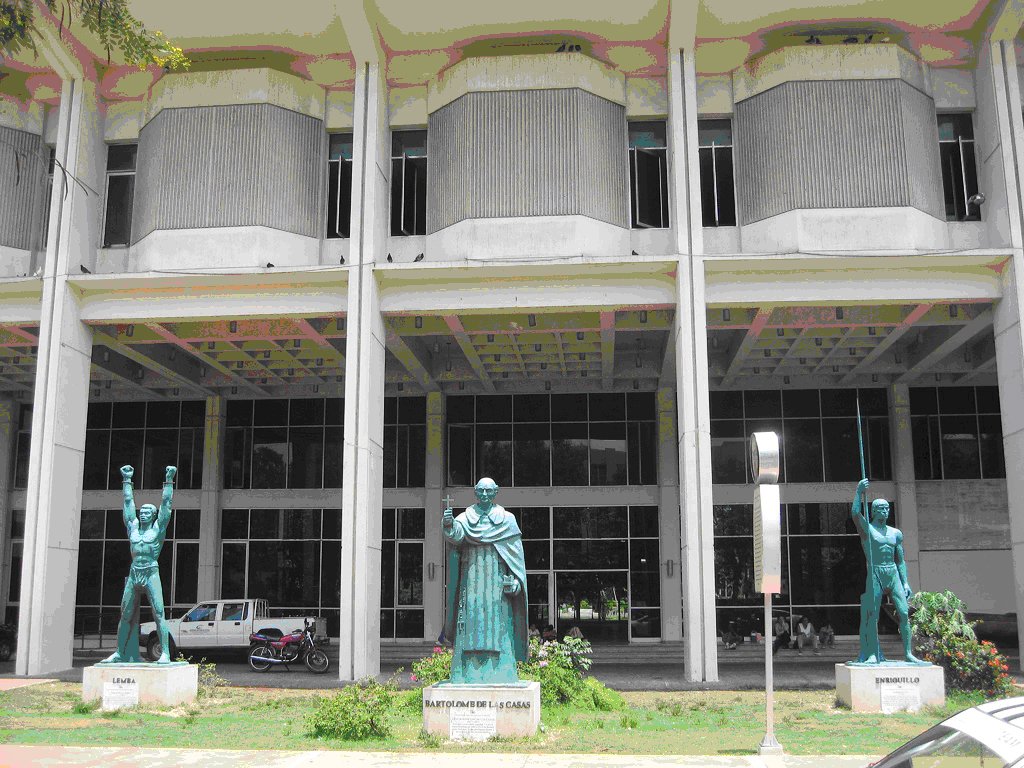 Three national heroes—Enriquillo, Bartolomé de las Casas, and Sebastián Lemba—stand on pedestals at the entrance to Museo del Hombre Dominicano, ranked by Lonely Planet as #11 of 120 things to do in Santo Domingo.

To most Dominican kids on summer vacation from New York, the museum ranks low on the list of things to do. But having just entered high school, where I’d been assaulted with questions about my identity, I accepted my uncle’s invitation to El Museo. I remember standing in the shadow of the copper statues, fascinated by the implication that three distinct races (apparently, Mongoloid, Caucasoid, and Negroid) could course through my blood. At school back in the United States, I proudly invoked this trifecta when asked how one could be black and speak Spanish.

Facing our right is Enriquillo, born Guarocuya. Loin cloth, bare feet, spear in right hand—pure aboriginal glory. Though being taken to Spain and christened Enriquillo at an early age, Guarocuya led Taino natives in revolts against the Spanish on the island of Hispaniola from 1519 to 1533. Named after him today are only a lake, a rock formation, and the highest rank in the Association of Dominican Scouts.

Facing our left is Sebastián Lemba.  Loin cloth, bare feet, two arms breaking free of its chains.  Brought from Central Africa to Hispaniola around 1525, Lemba escaped slavery after seven years and spent the next fifteen leading fellow cimarrones on raids of nearby plantations. Named after this first black anti-slavery resistance leader of the Americas is only the door to the fort where executioners displayed his head, Puerta de Lemba.

At the center, of course, is Bartolomé de las Casas. Cross in right hand, bible in left—the cleric ostensibly guiding to civilization the noble savages that flank him. Conquest history has it that the Spanish Dominican friar was Enriquillo’s mentor. Though De la Casas, himself participated in atrocities against the natives, he became a social reformer and was named the first official “Protector of the Indians”. His A Short Account of the Destruction of the Indies survives as Lat-Am Studies de facto reading.

The work might have also influenced James Cameron’s Avatar. (How dare I speculate.)  The film stars none other than Dominican actress Zoe Saldaña and is set in the year 2154—an anagram of 1542, which is the year De las Casas wrote Destruction of the Indies. And just as De las Casas stands heroically in the center of the Dominican triptych, Cameron’s white protagonist champions the liberation struggle of the natives, offering the image of the invader as savior rather than oppressor.

So what’s left of our blood 471 years after said destruction of said Indies?

I see clues in the verdigris coloring of the three copper statues: after exposure to the harshest of elements, they glow with the bioluminescence of Na’vi human hybrids.

In 1925, the Mexican thinker José Vasconcelos published a work that imagines an enlightened civilization emerging from the admixed peoples of Latin America. This cosmic race is to be possessed of love of beauty, a Christian-rooted spirituality, unity, and equality.

To Dominicans hodge-podge is life. We like to mingle, mongrelize, move, miscegenate, mix, miscellaneate things.

Take sancocho, our culinary answer to Vasconcelos’s “fifth” race. Scholars have gone as far as theorizing that this medley stew “should be unapologetically the Latinas’/os’ authentic reality, their locus theologicus (theological milieu), from which Hispanics approach the larger world”.[i]

The “authentic reality” is that the Dominican Republic brags about being the site of Spain’s first permanent settlement in the Americas. More often than not, the hybrid racial identity touted to the world by former president Leonel Fernández on first being elected in 1996 means to water down African ancestry.

This identity, whether real or not, risks becoming its own pedigree and elevating hybridity above those (visibly Black or Indigenous) who most continue to suffer the more odious socio-economic legacies of colonialism, slavery, and imperialism.

“I’ve been mistaken for being everything except what I am: Dominican,” says Raquel Cepeda in her memoir Bird of Paradise: How I Became Latina. “I look like someone who’s a bit of [Black and white] and then some—an Other.”

Depending on the eye of the beholder, this ‘Other’ includes everything from Turkish to Brazilian.

Her father’s near-death to heart disease launched Cepeda on an ancestral treasure hunt. Over the course of a year, she used DNA testing of herself, her father, a paternal uncle, and a maternal cousin to dig up the genetic history of her family before they “became Latino”.

Through the book’s provocative subtitle, Cepeda means to call out race and ethnicity as social constructs.

At the same time, she admits that, in the United States of Obamerica, “[t]he term ‘post-racial’ is an epic failure…As intangible and trivial as our differences are, we cannot pretend that race doesn’t matter.”

To me, race will not matter in this society once the question ceases to exist. When people stop saying, “What are you?” or “You don’t look [fill in the blank].”  More importantly, when the genes we outwardly express (though at the cellular level we are really collages) are no longer used to maintain or advance old power structures.

Taxonomists have had a field day biologically reclassifying the bird-of-paradise. DNA studies reveal that this 24-million-year-old family has 14 genera made up of 41 species—not counting the 24 known hybrids.

Geneticists, too, are having their field day studying Latino genes. A recent study vindicates Vasconcelos’s sci-fi vision of a truly cosmic race: “Latino genomes point the way to Hidden DNA”.

In other words, Latinos and Latin-Americans are the Every(wo)man—specifically those of us with African ancestry.

History has apparently woven into our DNA enough continents to aid scientists in completing the “Google map” of the human genome.

But as el merengue gets the blood flowing, let’s also keep in mind what happened when periscopes looked on our Américas as terra incognita.