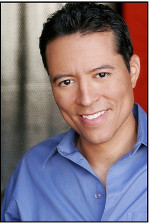 As a Latino man, I have no qualms about honoring and respecting strong Latina women because in my world, both my mom and wife play central roles. Through them I can attest to the veracity of Justice Sonia Sotomayor’s stirring quote: “I would hope that a wise Latina woman with the richness of her experiences would more often than not reach a better conclusion than a white male who hasn’t lived that life.”

My Mom is a professor and consultant. I’m inspired by witnessing how deeply she touches the lives of people through her life and work. She’s been an amazing role model for me. My wife and I share professional ambitions and aspirations. We coach each other, support each other and have a business together too.

I’m comfortable saying that I’m a strong Latino male because I honor the strength of the feminine. More than that, I embrace it and it is an undeniable part of me. They’ve taught me about love and honesty, qualities that inform my work as an actor. Actors have the ability to serve the community through the transformative experience of bringing to life a character. With pain and vulnerability, integrity and dignity, these unvarnished characters serve as vehicles for reflection. In the end, actors entertain but we also help people understand themselves and their relationships and the role individuals play in their community and the world.

I learned very early that not every role was going to be written in a way that I’d like it to be. There’s still a lot of dimension, depth and nuance lacking in roles for Latinos in the industry. In a very unassuming way, I wanted to show the intelligence of a man who was pushed in to the position as head of a family and head of a cartel. That was the character I played in Kingpin. I invested in that character with all my heart to make it as complex and rich as possible.

Prior to that, I got my first big break on the Broadway show “Miss Saigon,” due in part to my ethnically ambiguous looks, talent and training. Early on I experienced some push back from the Asian community. But I gave the character everything I had in me and the Asian community eventually came around.

Rather than get upset about the paucity of roles for Latino male characters, I teamed up with a group of friends and started producing as early as 1995. Since then, I’ve produced five projects and directed two short films which garnered some awards and recognition in the industry. But overall, in the roles I either play or create, I celebrate humanity, our collective humanity.

While the public-at-large may view actors as caught up in the glamorous life of celebrity, through my work, I embrace acting through the lens of a cultural worker imbued with the principle of service. I accept and work on roles to compel people to do better things with their lives; to help move people forward.

Ours is a small, close-knit family. We are here for each other. Because of their steadfast love and the unwavering support from my mom and wife, I know that “we can’t do it alone.”

My message to young people, especially young Latino males is: Be true to yourselves brothers, I implore you to get in touch with who they are. Know your truth. Learn about your culture and history.

The things that I’ve learned, especially the disciplines of humility, kindness and patience through my martial arts training, continue to teach me about who I am. These practices, specifically, acting and the martial arts, have helped me to live and actually improve my skills as an actor because I focus on the truth. All I focus on is giving my heart over to someone, listening without any agenda—just listening.

In the public sphere, these values are associated as feminine qualities. They’re not. They are human qualities. Now that makes for a strong Latino brother.

Yancey Arias is an American actor, perhaps most noted for his work on television crime dramas, particularly his roles as Miguel Cadena in the NBC series Kingpin and as Gabriel Williams in the FX series Thief. He also starred in PBS’ series American Family. In the 2014 release of the film, Cesar Chavez: History is Made One Step at a Time, Yancey Arias will portray the role of Gilbert Padilla, one of Cesar Chavez's fellow organizers. Padilla worked tirelessly alongside the Civil Rights icon from the beginning of the CSO and the creation of the UFW and the NFWA unions. Padilla and his family gave 15 years to the union to help bring dignity and fairness to the farm workers in our country. 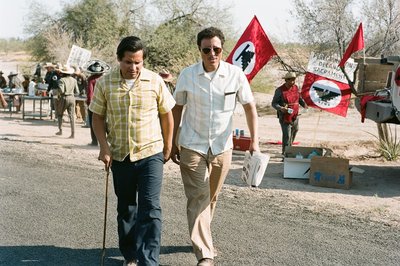