Correction: We’ve corrected this piece to reflect that the story of The Syed Family Xmas Eve Game Night centers on a Muslim Pakistani American woman who brings her Puerto Rican partner home.

As families gather together to celebrate with loved ones, festivities, and food, many look to see those celebrations reflected in film and television. And for those spending time away from their communities during this ongoing pandemic, seeing familiar traditions and customs reflected on television could deliver a bit of comfort.

Older Christmas classics like the black and white “It’s a Wonderful Life,” the claymation “Rudolph the Red-Nosed Reindeer,” and the animated “Frosty the Snowman,” are important to conceptions of what Christmas in America looks like, even though many are largely devoid of protagonists and characters of color. Some, such as the classic “A Christmas Story,” even perpetuate harmful stereotypes about Asian Americans.

As the demographics of the United States change, representations of the country’s diversity seen in film and television have been slower. For Asian American communities, the success of recent films like “Crazy Rich Asians,” “Shang-Chi and the Legend of the Ten Rings,” and television shows like “Fresh off the Boat,” as well as well-formulated characters of color in other film and television projects, show that audiences for films with Asian American casts exist–and more holiday movies should follow. 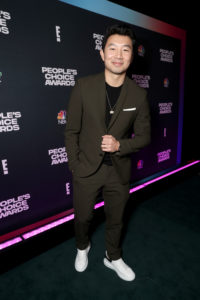 2021 PEOPLE’S CHOICE AWARDS — Simu Liu, recipient of The Action Movie Star of 2021 for ‘Shang-Chi and the Legend of the Ten Rings,’ poses backstage during the 2021 People’s Choice Awards held at Barker Hangar on December 7, 2021 in Santa Monica, California. (Photo by Todd Williamson/E! Entertainment/NBCUniversal/NBCU Photo Bank via Getty Images)

“There aren’t that many romantic comedies, in general, with Asian American leads, and that’s especially true for holiday rom-coms,” Stephen Gong, executive director of Center for Asian American Media, told the PBS NewsHour. “Historically, there haven’t been that many representations of Asian Americans celebrating Christmas, even though many in our community celebrate the holiday.”

“Historically, there haven’t been that many representations of Asian Americans celebrating Christmas, even though many in our community celebrate the holiday.”

What are holiday films showing?

“Christmas movies are white, white, white,” said Tanzila Ahmed, artist, and author of The Day the Moon Split in Two: A Grief Poetry Collection, who loves Christmas movies and rom-coms. Since her Muslim and South Asian American family did not celebrate Christmas when she was a child, part of the allure of those holiday movies for her is that it feels like a window into white American culture, including both traditions and myths.

“These are not just movies about people at Christmas time, these are movies about white culture and the white fantasy of Christmas,” Ahmed said.

Ahmed says that she loves a good meet cute, Christmas or otherwise, and the cliches that populate holiday movies: an accidental run-in, cases of mistaken identity and the fake significant other taken as a shield to a Christmas wedding that are often rounded out with a bit of magic and a Christmas miracle.

“These are not just movies about people at Christmas time, these are movies about white culture and the white fantasy of Christmas.”

One thing, Ahmed notes, is that very few Christmas films actually focus on the religion of Christianity, Jesus, God, or faith issues.

“There is belief, kismet, fate, destiny, doing good for all — which I personally see as spiritual values — but it’s never God. It’s just about forces of good,” Ahmed said.

Not just the sidekick

Including characters of color is a good first step to making holiday films more inclusive, said Yuen, but simply casting actors of color without additional character development to follow is not enough. Having Asian Americans and other people of color involved at all levels of film and television making, from writers to directors, helps lift the story up off tired old stereotypes and tell stories that are true to the Asian American holiday experience.

“When actors of color are excluded, or only appear as tokens or sidekicks, they may be seen as ‘less American,’ especially by the huge number of audiences who consume holiday films and rom-coms,” Yuen said.

Not genuinely incorporating people historically ignored by Hollywood can also lead to those characters being treated as appendages to white characters. Ahmed jokes that although the Hallmark brand of holiday movies almost always has a white female protagonist, this year it seems like about half of the protagonists’ best friends are people of color or LGBTQ.

Full well-rounded protagonists of color, with all the complications of their family and cultural ties, can change not only the film, but society’s expectations and nuanced understandings of those cultures.

“When a protagonist of color is isolated and stripped of any reference to their culture or race, the underlying narrative is that they must assimilate into white culture to be acceptable in a holiday movie. This is also an erasure of how communities of color function in real life,” Yuen said.

Despite the historic lack of Asian Americans in American holiday movies, a handful have been made in recent years. Yuen points to films and television shows such as “A Sugar & Spice Holiday” from Lifetime, “Boyfriends of Christmas Past” from Hallmark, and “Love Hard” from Netflix as some of her favorites.

Another important reason to have characters of color is to create more jobs for actors of color in an industry that struggles with diversity – so much so that it has become a topic of trending conversation on social media with hashtags like #OscarsSoWhite and #WhitewashedOUT. “It’s a huge market with lots of jobs for actors,” Ahmed said.

When actor Jimmy O. Yang was deciding whether to accept the lead role in “Love Hard,” which was not written with any particular race in mind, he told Vanity Fair in a Nov. 2021 feature that he realized that if he was hired, it would also mean jobs for at least three other Asian American actors—the character’s brother (Harry Shum, Jr.), father (James Saito) and grandmother (Althea Kaye). Later, he made it clear to producers that the competing love interest should also be Asian American (Darren Barnet) so that race would not become the issue between the characters.

“Ultimately, it was one of those things where I took the part thinking, I think this is a positive step for representation, to see an unlikely hero who could have been any ethnicity,” Yang told Vanity Fair. “Look: At the end of the day, if you don’t think I’m hot, you might think Darren’s hot. You might think my dad is hot. You might think Harry is hot. We give you a whole spectrum of cute Asian guys.” 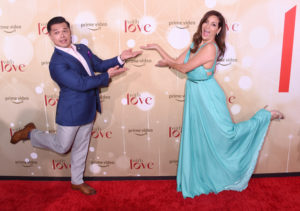 With more diverse representation in film and television, Asian Americans are better able to see themselves and storytellers are able to tell a fuller story of America and Americans.

“Hot Mess Holiday” on Comedy Central features an all-South Asian American cast, including Kal Penn, at Diwali. Two girlfriends set out on a post-heartbreak weekend extravaganza, which somehow turns into a diamond heist.

In “With Love,” Vincent Rodriguez III plays Henry, the Filipino American partner of Jorge Diaz Jr. (Mark Indelicato) who walks into a big Mexican American family gathering for the first time on Christmas Eve. His race, ethnicity, gender, and sexual orientation are non-issues to the family that love and accept him for being Jorge’s partner.