At this Florida jail, the inmates are also zookeepers

Jeanne Selander had never worked in a jail before she came to save the zoo at the Stock Island Detention Center.

But she knew animals and their habitats: the palm trees forming lush circles around the jail, the hot concrete roads running past it, the humidity that would blanket the whole island before relenting in the early afternoon and the creatures that wandered Key West in search of a home.

The zoo formed in 1994, when a deputy noticed a group of ducks occasionally losing one of their flock to passing cars. A group rounded up the ducks and placed them in a new home — the space where columns, built to raise the jail off the ground and brace for flood, had formed an empty space underneath the building. As word went around Key West that the jail was taking in animals, more and more people began dropping them there.

“We call that the coconut telegraph,” Selander said.

Several years later, the zoo, having been cited with multiple USDA violations, was ready to shut down. But Selander, who had a degree in marine biology and extensive experience with animals, saw potential in the space. “I told the sheriff I would make it something special if he would give me the reins,” she said. “He gave me the responsibility to do what I could to bring in new animals and bring it back up to code.”

Ten years later, the zoo has 150 animals, including a sloth, a lemur, kinkajous, exotic snakes and lizards, rabbits, ducks, geese, pigs, miniature horses, birds and more, and a thriving program to place inmates in work positions there. 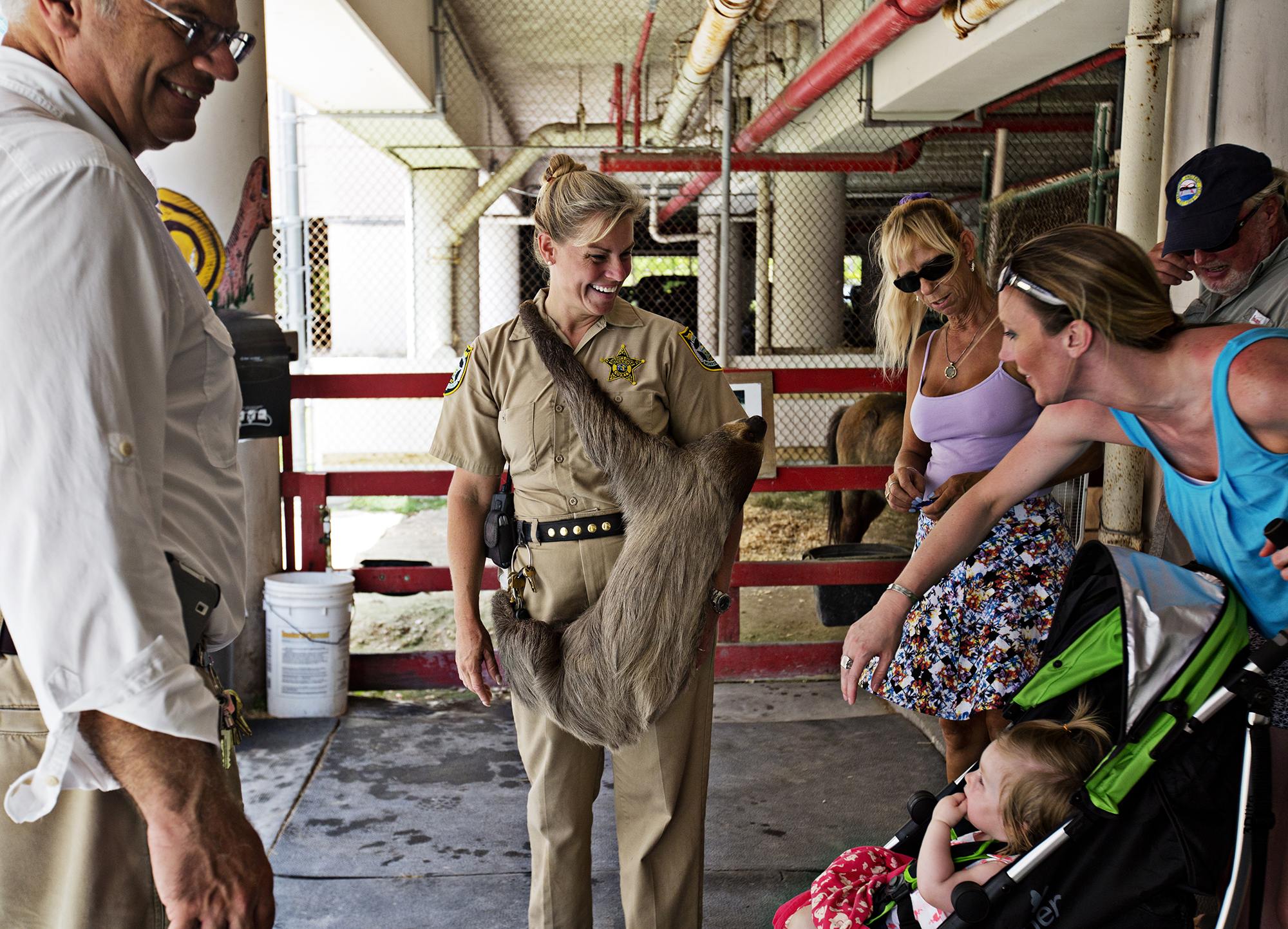 Curator Jeanne Selander — “Farmer Jeanne” — holds Mo the sloth, and visits with a crowd of visitors for an open house at the jail farm. “Everyone thinks he is hugging me, but really he just thinks I’m a tree,” says Selander. Photo and caption by Kim Raff

This is where photographer Kim Raff entered the picture. Raff, who is based in Salt Lake City, was applying for an artist’s fellowship in Key West when her friend, who lives there, told her about the zoo. Having worked on projects around the subject of incarceration before, she decided to visit with her camera.

She was surprised at how accessible the jail was, and how creatively the inmates and Selander had put the space to work. “Visually, it was so amazing to see that stereotypical, industrial looking building, very white walls, not a lot of windows — to see that juxtaposed with these animals running around,” she said.

The zoo works with a staff of four or five inmates, plus Selander, and runs purely on donations, not taxpayer money. The inmates get assigned to the zoo through the jail’s inmate worker program. Violent offenders, or anyone who has abused children or animals, are not eligible for the job, she said. 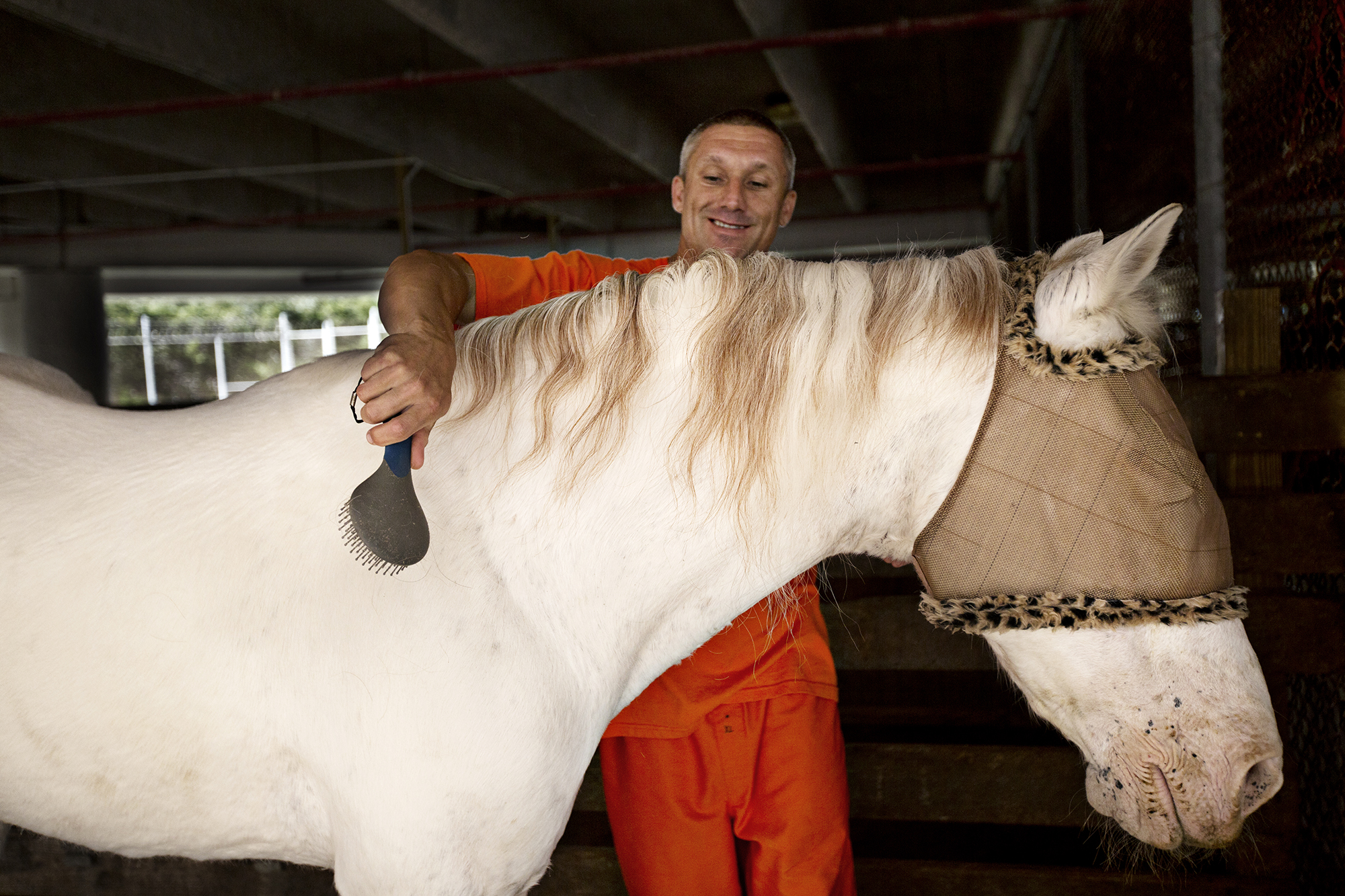 Inmate Michael Smith brushes Ghost, an elderly blind horse, at the Monroe County Sheriff’s Office Animal Farm. Ghost was abandoned by his owner in a remote area of Miami-Dade county and left to die. He came to the farm just skin and bones. Working with Ghost teaches patience to the inmates. They have to be gentle and build trust in order to care for him because he frightens easily. Photo and caption by Kim Raff

While photographing the space, Raff spent time with some of the inmates working there, including Mike Smith, who struggled with substance abuse for years. Talking to him, she said it was clear that the zoo had played a positive role in his rehabilitation. “He was already there and ready to clean up his act, but the zoo really helped him stay on the right track,” she said. “[It] gave him a way to keep his mind busy, to keep him on the right path until he could get into treatment.”

Raff said she wants the photographs to show something unexpected — and in the process, help people reconsider stereotypes about jail and people who are incarcerated, she said.

Selander said she has seen the work have a positive effect on the inmates. “For the most part, it’s very good for them. Instead of sitting upstairs in a cell, they’re actually doing something productive and something that gives them some meaning and some purpose,” she said. “They often will get out and bring their families back to show them what they did.”

You can see more of Raff’s work below. 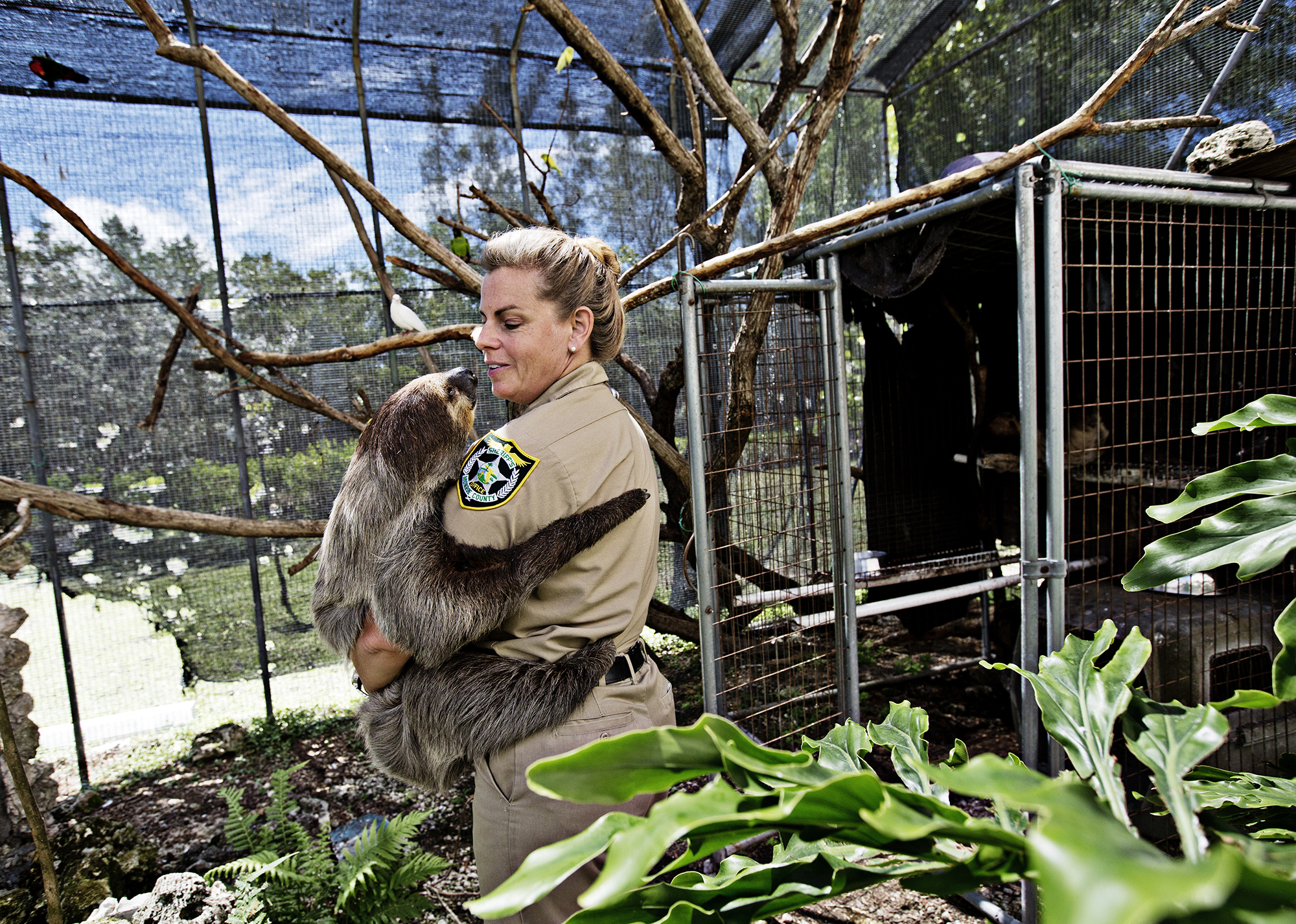 Curator Jeanne Selander holds Mo the sloth, the most well-known animal at the farm. Selander regularly takes him to community events and stands with him at the entrance during open house days, where he meets all the visitors to the farm. “I always laugh. They didn’t invite me, they invited Mo, I’m just his roadie,” said Selander says of his appearances up and down the Keys. Photo and caption by Kim Raff 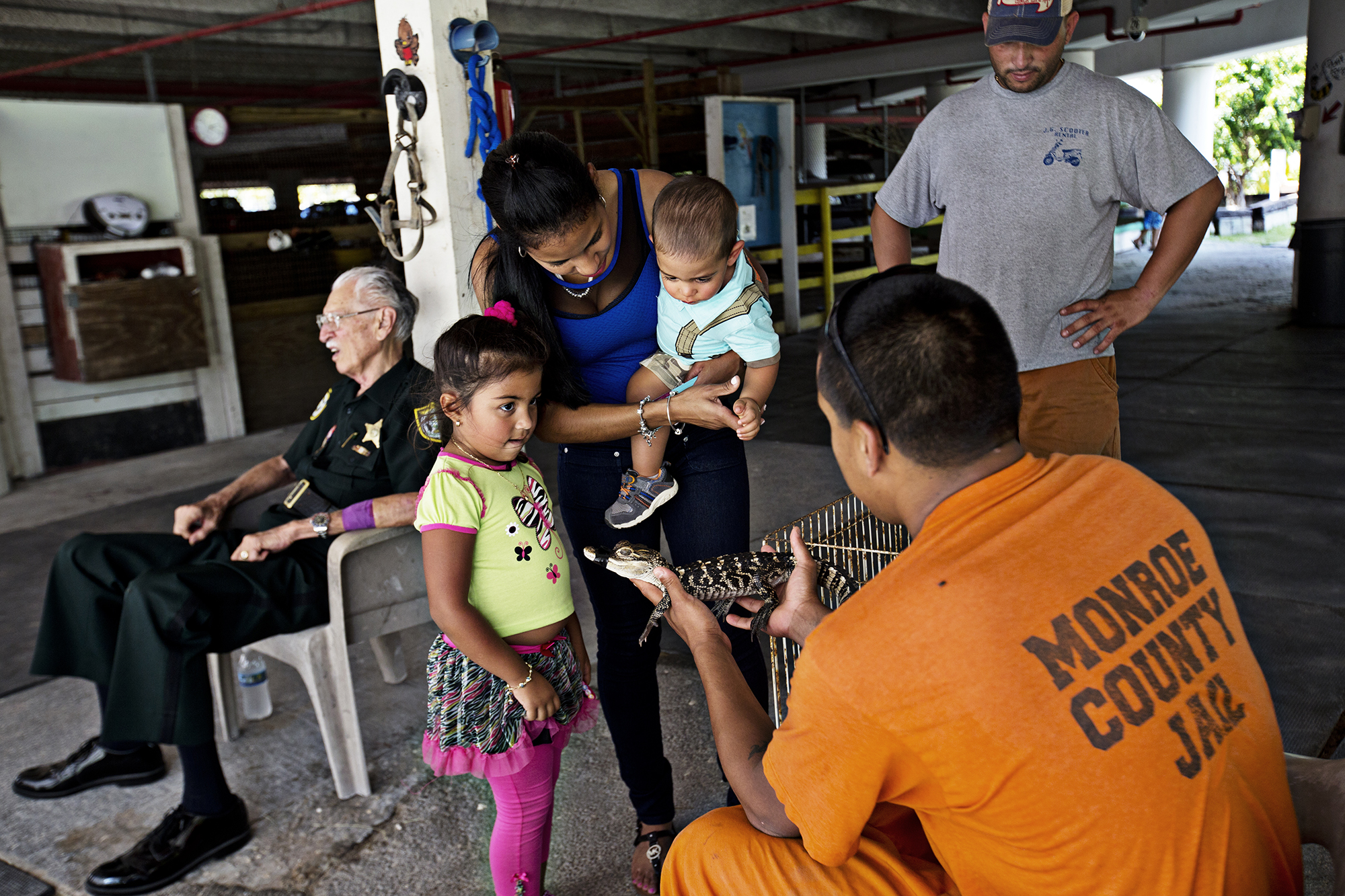 Inmate Orlando Gonzalez shows Boot the alligator to a visitors during at open house day at the Monroe County Sheriff’s Office Animal Farm on Stock Island, Florida. Boots came to the farm after ingesting the silicone lining in her aquarium. Her owners didn’t want to pay for the veterinary care to get her back to health, so they signed her over to Dr. Doug Mader, who donated her to the farm. Photo and caption by Kim Raff 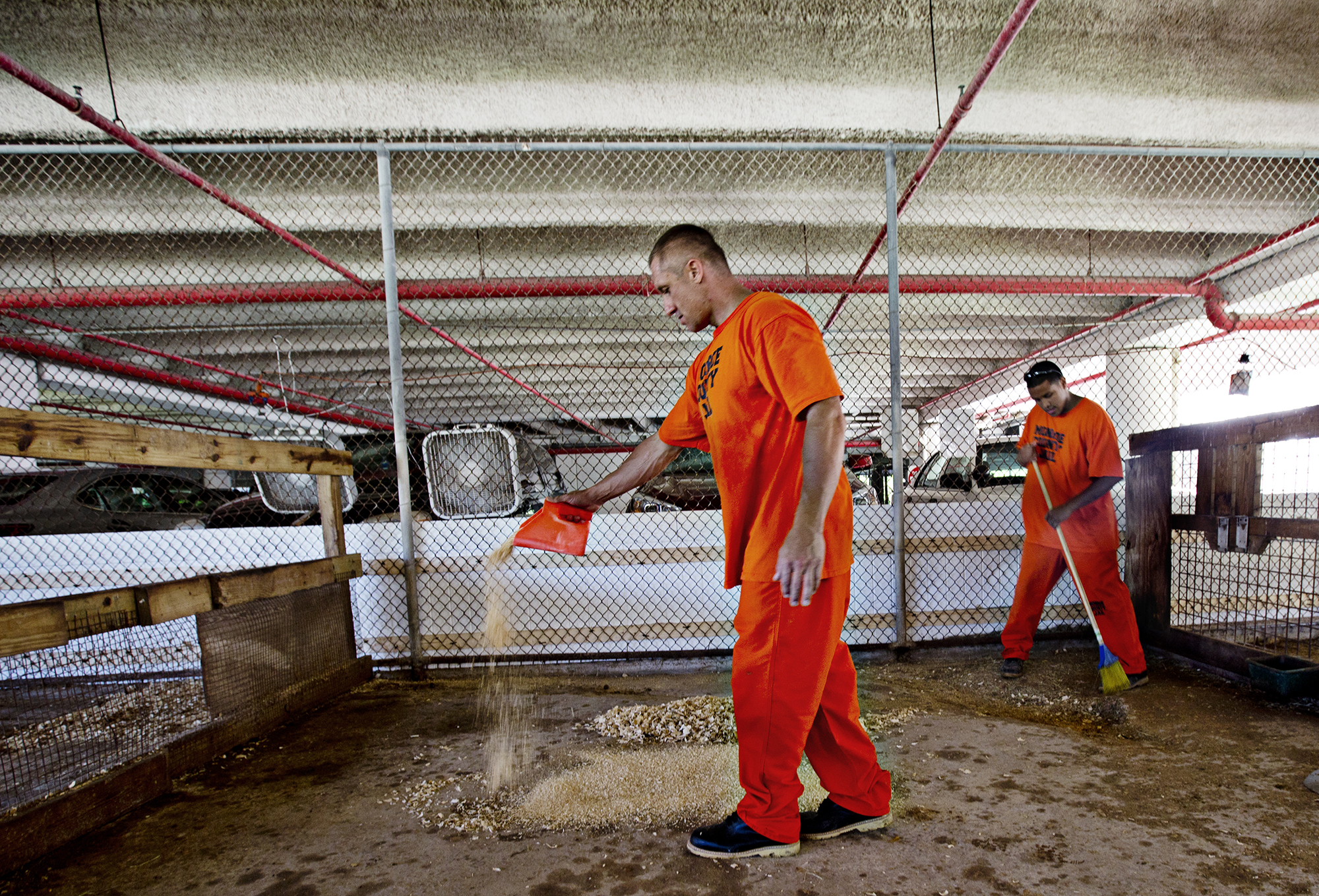 Inmates Orlando Gonzalez and Michael Smith clean out animal pens at the Monroe County Sheriff’s Office Animal Farm that is located on the grounds of the detention center. Photo and caption by Kim Raff 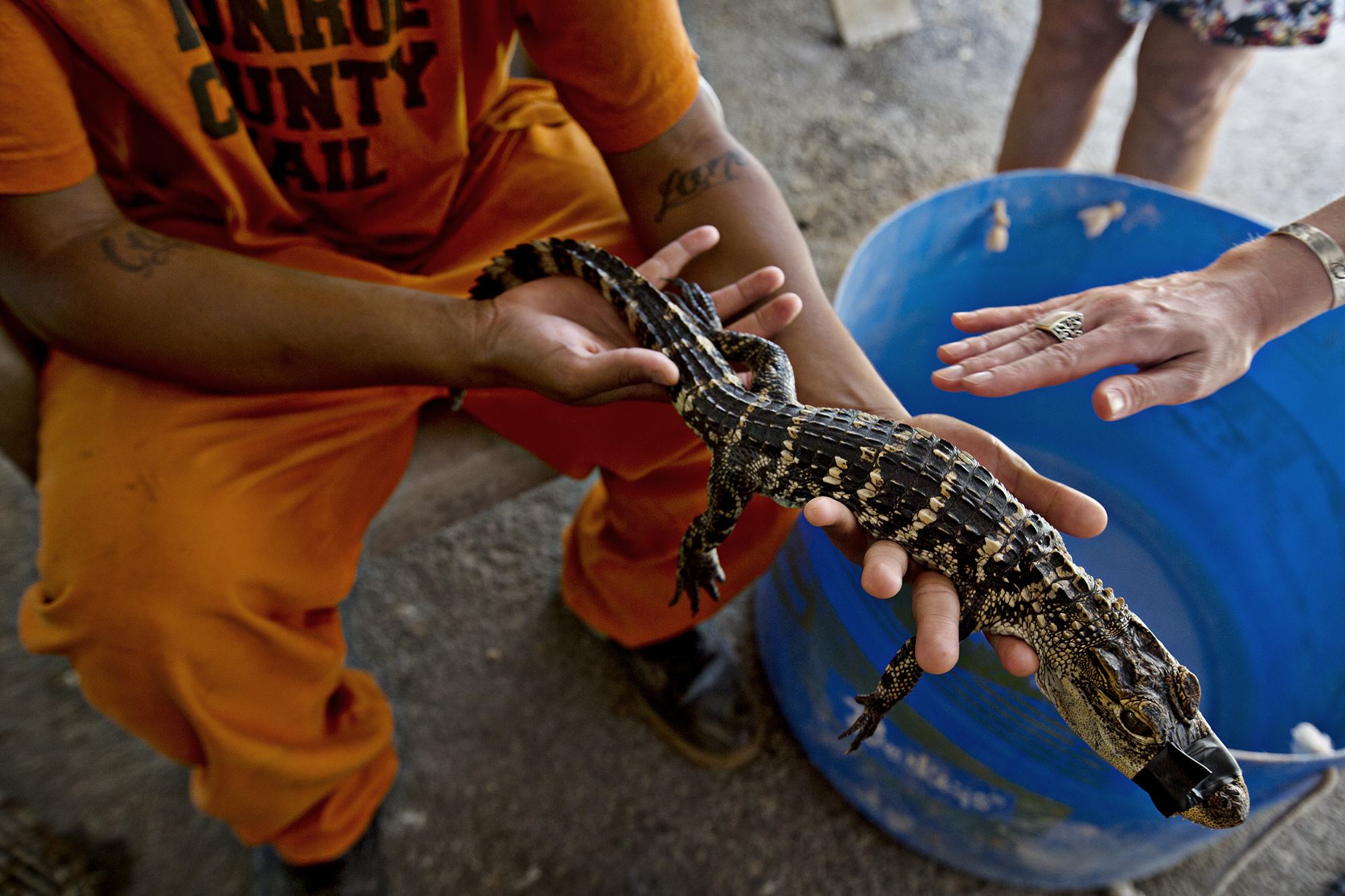 Inmate Orlando Gonzalez shows Boots the alligator to visitors during an open house at the Monroe County Sheriff’s Office Farm on Stock Island, Florida. Photo and caption by Kim Raff

Left: Inmate Michael Smith cradles Thumper, a flemish giant rabbit, as Fat Albert, a giant tortoise who roams the farm, waddles over looking for attention. Hundreds of people stream through the zoo at the Stock Island Detention Center, which is completely funded by donations and community support. No tax dollars go to fund the project. Photo and caption by Kim Raff