These photos show an honest portrait of working moms in America

When it comes to motherhood and work, everyone has an opinion.

And at this point, it feels like I’ve read all of them. I know the numbers on paid maternity leave. I know why it’s OK to have one, multiple or no kids. I know why it’s important for all women, including mothers, to lean in, and also the flaws with that concept; that stopping women with families from dropping out of the workforce must involve paying them more; and why we should stop calling women “Mommy.” I am a female, mid-twenties millennial with an Internet connection, after all.

But no one who I have read, heard or watched has approached the topic quite like Alice Proujansky.

When Proujansky, a documentary photographer, had her first child several years ago, she knew her work was going to change. “I wasn’t going to be traveling as much for awhile,” she told me. “These concerns were so overwhelming my mind — questions about work, motherhood and identity, and the way that they can inform each other and support each other but also really conflict.”

So she began seeking out the people all around her who were dealing with the same questions — mothers with careers outside the home who she knew personally, or who were friends of friends. She started asking questions and taking photos.

“Just by watching them and talking to them, I could feel that what I was doing wasn’t crazy, it wasn’t insane,” she said. “It was hard, but it was important and doable.” 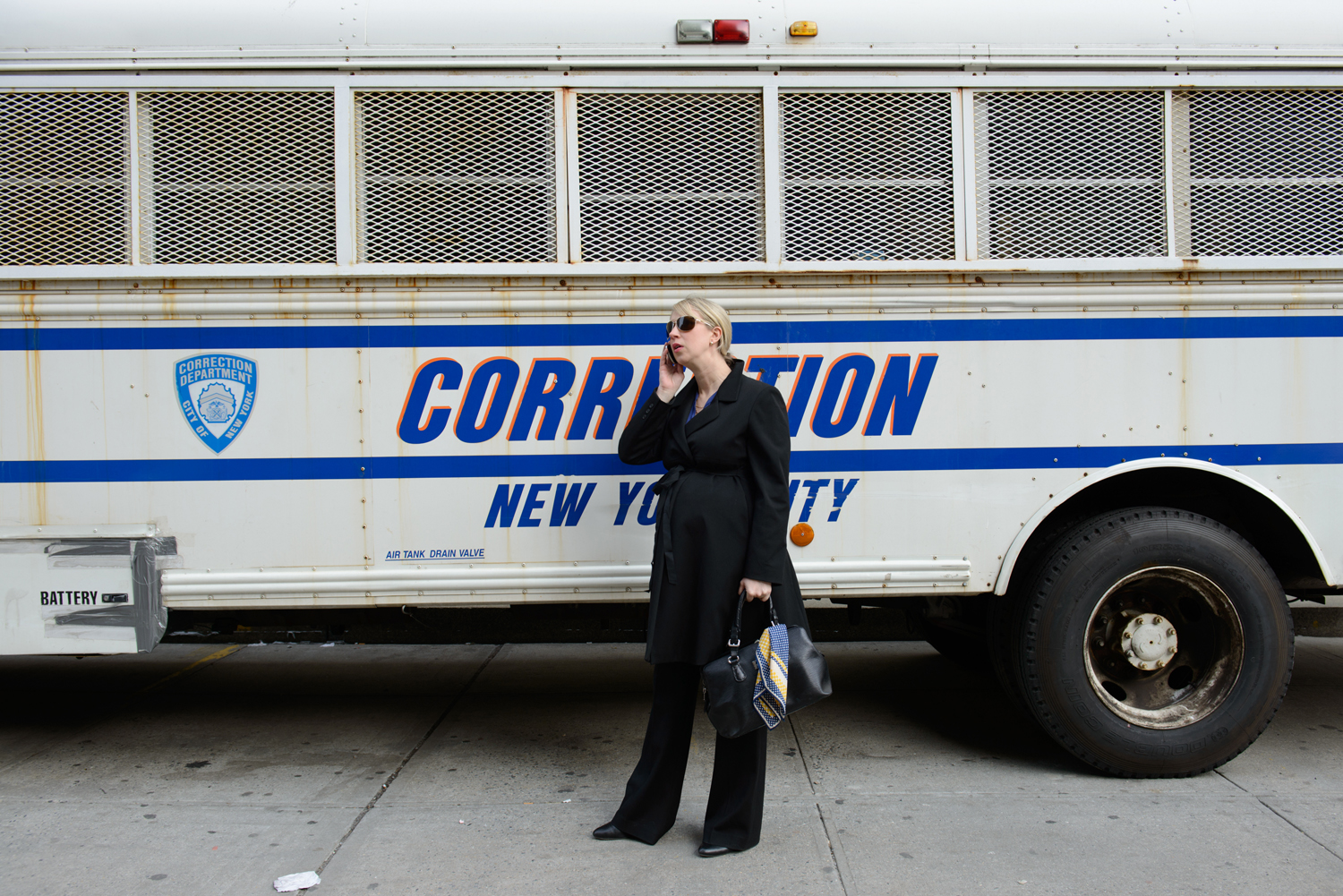 Pregnant Assistant District Attorney Lucy Lang talks on the phone outside of her office. Photo and caption by Alice Proujansky

The result was “Women’s Work,” her series profiling working mothers. Her subjects range from an Assistant District Attorney arguing a murder case in court to a nurse who assists with abortions at the same health center where she gave birth.

“I wanted to make photos that showed the way I thought, the people I knew who reflected my own experience with it. We love our children and we are engaged with them but we are also engaged with the world. Those things can inform each other,” she said.

By making a wide range of mothers’ work more visible, Proujansky hopes to add more depth to the conversation around parenting, which she said often oversimplifies the role of mothers.

“I think our culture tends to sort mothers into strange and conflicting categories, where we’re expected to be self-sacrificing and put on a pedestal … but at the same time we aren’t supported, we aren’t given paid maternity leave, [and] there is derision in the way people talk about motherhood,” she said. “There are all these conflicting stereotypes about it.” 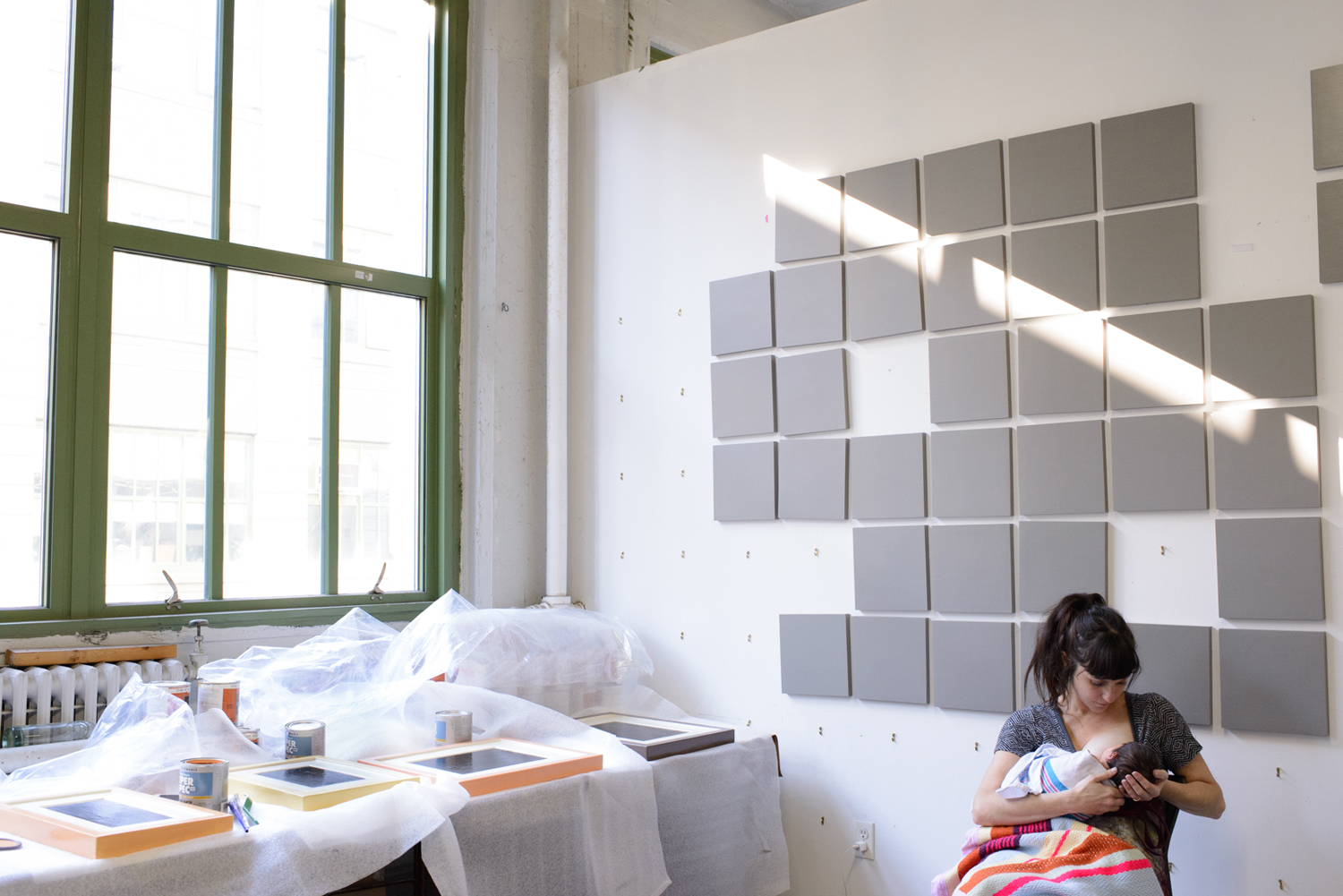 Painter Marcie Paper breastfeeds her ten-day-old baby, Andi Paige, in the studio where Paper works for a conceptual artist, managing his studio. She was restoring earlier works that day. Photo and caption by Alice Proujansky

Proujansky has tackled similar subjects before, including in a previous series that focused on birth culture. People are eager for the more complex story about mothers in America, Proujansky said.

“I think it’s really important to see women and our bodies in a way that’s multifaceted and honest,” she said. “I think that most of the images that we see of women don’t depict us in this wide variety of roles, where we are being physical in our jobs as we’re mothering, and then we’re also exploring our intellectual and creative self. It’s really important to me to present a multifaceted image of women because I don’t see enough of that.”

You can see more of Proujansky’s work below. 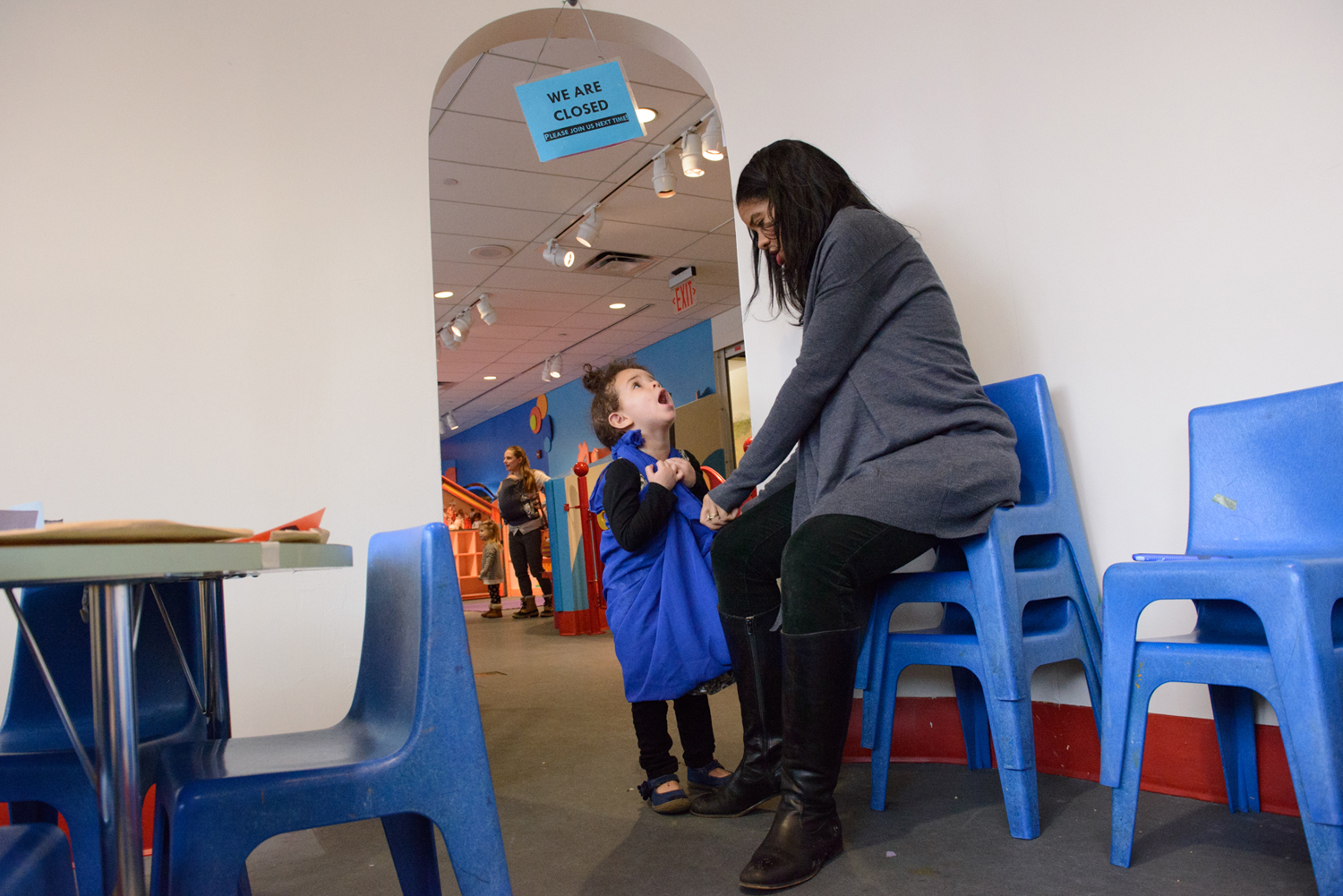 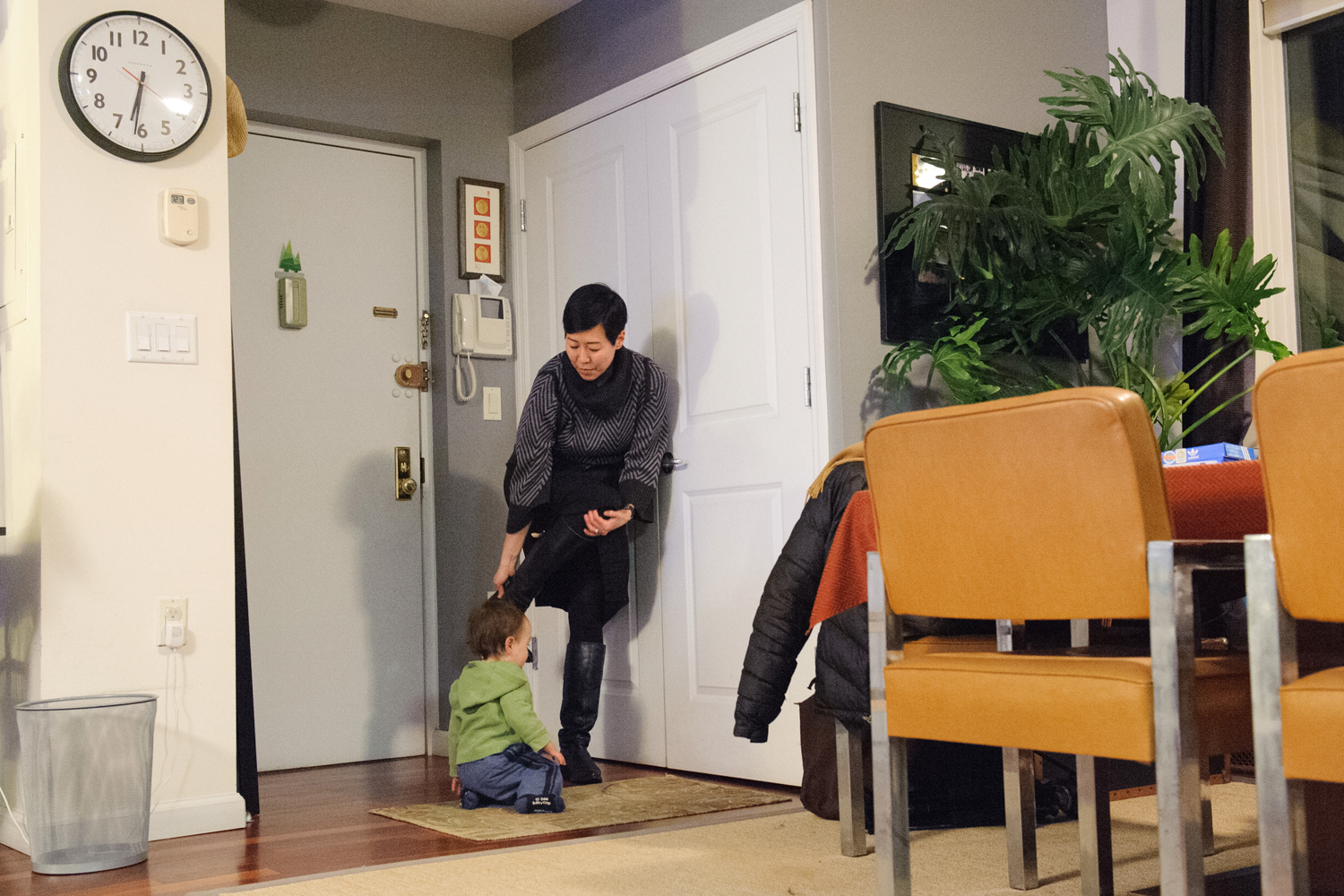 Miki Kamijyo greets her year-old son Oliver as she returns from her job as a lawyer. Her husband Aaron Myers was eager to stay home caring for his son because Kamijyo brought home a bigger paycheck than he did, because she was more passionate about her career, and because both he and Kamijyo were raised by single mothers. Myers teaches DJ classes a few nights a week and gets some help with the baby from Kamijyo’s mother. Photo and caption by Alice Proujansky 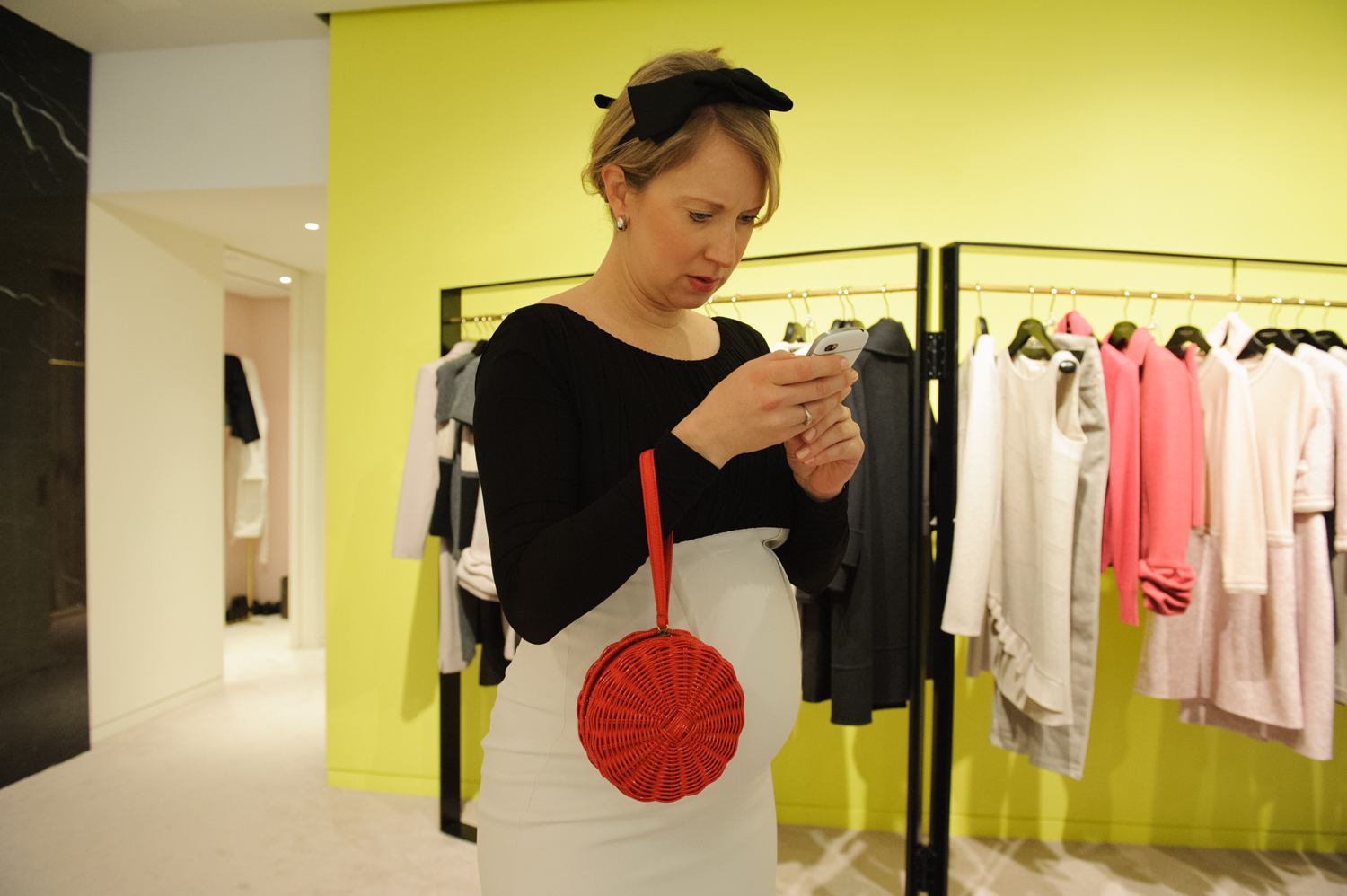 Pregnant Assistant District Attorney Lucy Lang checks her work email while trying on a dress to wear to the Frick Collection Young Fellows Ball. She serves on the museum’s Young Fellows Steering Committee and helped to plan the ball. Photo and caption by Alice Proujansky 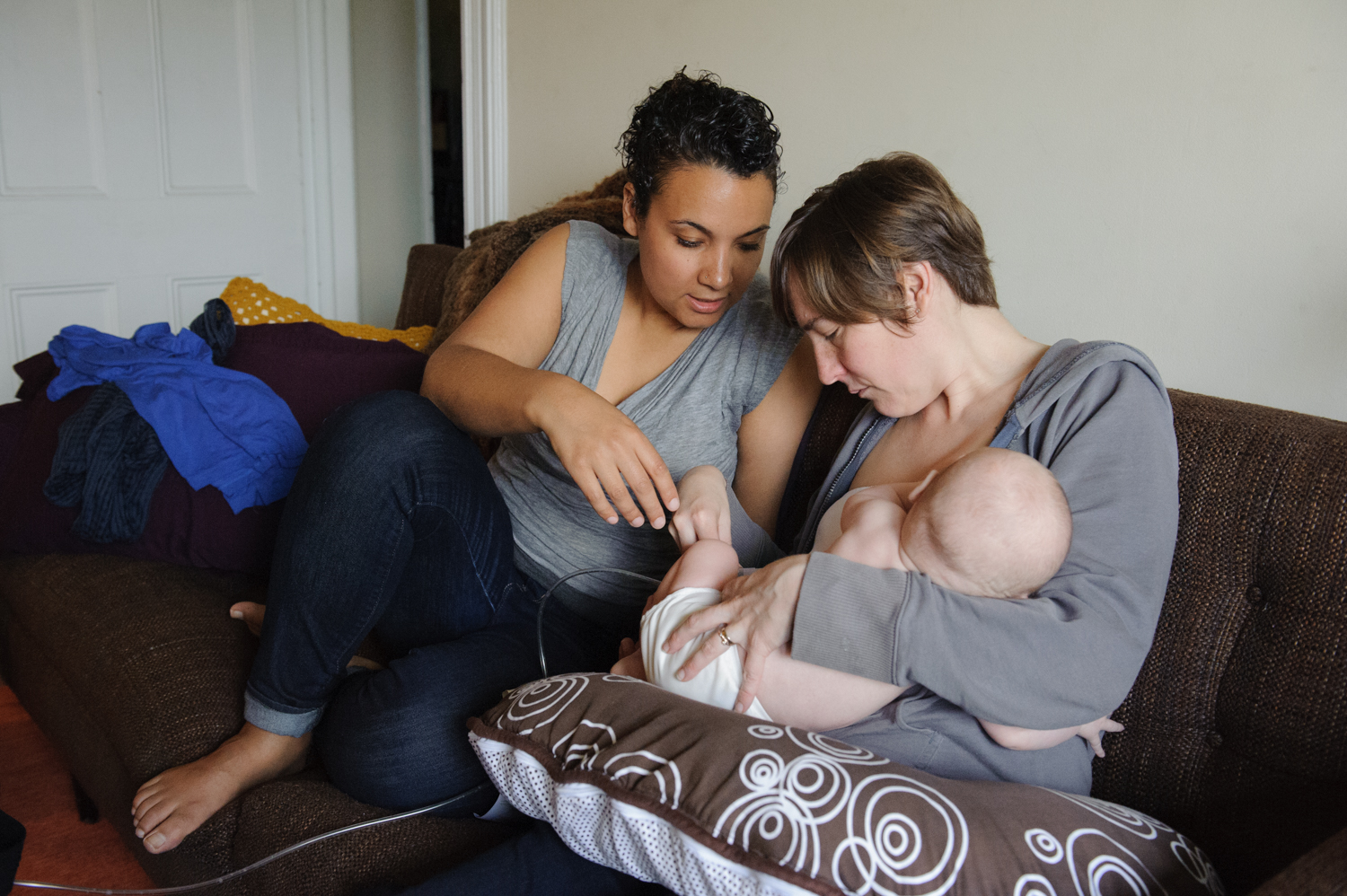 Kamdyn Moore and her wife Tomara Aldrich check to make sure the breast pump is working as Tomara nurses their four-month-old son, Spencer, and pumps simultaneously before work Photo and caption by Alice Proujansky.