Directions: Read the summary, watch the video above and answer the discussion questions. You can turn on the “CC” (closed-captions) function and read along with the transcript here.  This lesson is updated as events change and as a result has grown extensively. Choose the questions that make the most sense for your class and which time permits.

Summary: Violent clashes have taken place over the past several weeks between protesters and police in Hong Kong, a special region off the coast of southern China that was a British colony until 20 years ago. China has threatened to unleash retribution upon those who challenge its authority and have amassed military forces on the border. In mid-August, the date the video above aired, pro-democracy demonstrations had crippled the city’s busy airport for a second day in a row, as mass protests entered their 10th week. On the third day, the airport was up and running again as most of the protesters had left.

Protesters are calling for more democratic rights and investigations into police brutality from past demonstrations. The protests began in response to a controversial extradition law that would allow China to transport people accused of crimes back to the China mainland for trial. During the unrest, police have attacked demonstrators while Chinese media warned it might send Chinese paramilitary forces.

On August 10, a video of a group of demonstrators at Hong Kong’s airport singing Do You Hear the People Sing from the musical Les Misérables went viral.

More than thousand HKers sing Les Miserables' 'Do you hear the people sing?' at HK international airport with their calls for free election and democracy. Here is the Ground Zero in the war against authoritarian rule. That's the reason for us never surrender. pic.twitter.com/1MkTp4BkVg

“That’s the reason for us (to) never surrender,” wrote Joshua Wong on Twitter, the Hong Kong activist who posted the video.

Hong Kong is part of China but maintains its own political system, currency and identity. Hong Kong, a city of almost 7.5 million people, was a British colony for more than 150 years. In 1997, Hong Kong became part of China once again. The Hong Kong Basic Law ensures that it keeps its unique system of government which guarantees freedoms not available to those on China’s mainland, including the right to protest, freedom of the press and freedom of speech. Previously, China’s government had stated it wouldn’t interfere with Hong Kong’s democratic nature but in recent years has reinterpreted the Basic Law and said they have total jurisdiction over the city. 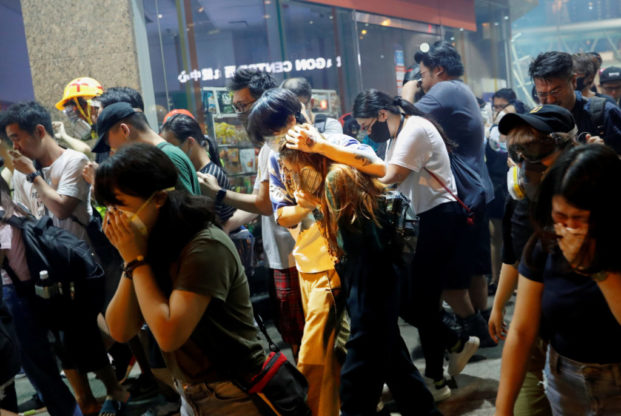 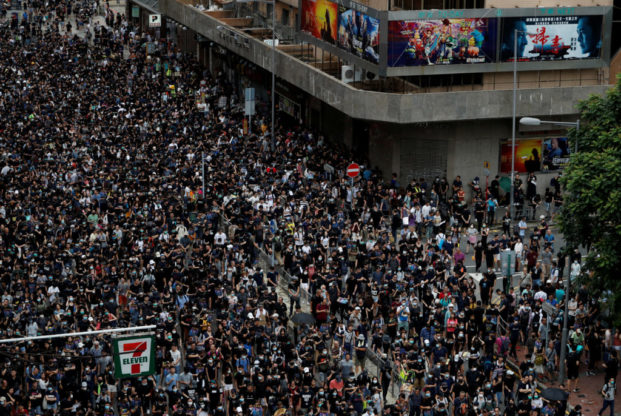 1) Essential question: Why are peaceful protests an essential part of a democratic society?

2) What do you know about Hong Kong? How about its relationship with mainland China? How could you find out more about the origins of the demonstrations and previous demonstrations in Hong Kong’s history, including the 2003 protests?

3) While the majority of protests in Hong Kong over the last 10 weeks have been peaceful, violence has also broken out. Why do peaceful protests sometimes turn violent? How might the use of violence affect the demonstration’s outcome?

4) Why have Chinese authorities compared the mass protests to terrorism? Is this label warranted? Why or why not?

5) Listen to protesters singing Les Miserables’ “Do You Hear the People Sing?” in the Hong Kong Airport on Aug. 10th in the tweet above. What is this song about? How has protest music been used to push for social change throughout history? What other protest songs have been associated with movements looking to bring about change?

6) Chinese media has been emphasizing the role of British colonial rule over Hong Kong as it makes its case for the demonstrations to stop. Why do you think Chinese government officials who control the media in that country are making this decision? What research could you conduct to find out more how colonialism affects a nation years later?

8) Media literacy: Who else would you like to have heard from in the story? What does the segment say about the role of the international community, including the U.S.?

For a deeper discussion about the situation in Hong Kong, watch this NewsHour interview “Amid Hong Kong’s unrest, how China is ‘laying the groundwork’ for intervention” with former National Security Council staffer Ken Lieberthal and Minxin Pei of Claremont McKenna College. What questions would you like to have asked the guests and why?