Directions: Read the news summary, watch the video and answer the discussion questions. This video has been edited for length. To watch the video in its entirety or read the transcript, click here.

Summary: Joe Biden formally clinched the Democratic party nomination for president on June 6. In the polls, Biden is ahead of President Trump by several points in battleground states that Trump won in 2016, including Pennsylvania, Florida, Michigan, Wisconsin and Arizona. 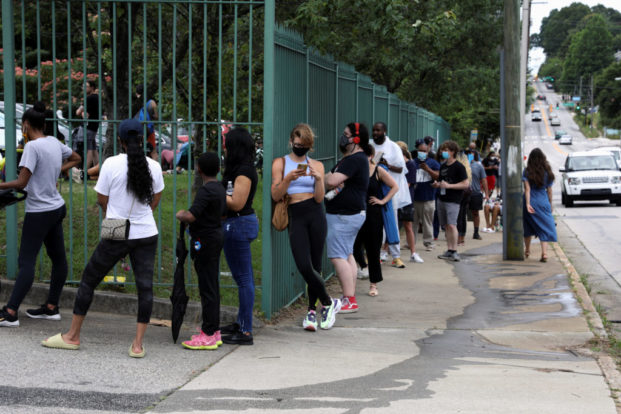 Voters line up outside of a polling location to cast their ballots after Democratic and Republican primaries were delayed due to the coronavirus disease (COVID-19) restrictions in Atlanta, Georgia, U.S. June 9, 2020. REUTERS/Dustin Chambers

Polling station closings (partly due to the COVID-19 pandemic) have already led to enormous lines and dysfunction in 2020 primaries. However, this isn’t the first time that many polling stations have closed down. In the years leading up to the 2018 midterm election, officials closed down thousands of polling places and reduced staff nationwide, citing cost savings and alternative voting methods. These closings placed a disproportionate burden on minority counties.

Sign up for short education news highlights from the PBS NewsHour here.