Supernova 1987A, the first star explosion to be studied from the beginning, is teaching scientists new lessons about the evolution of galaxies and the formation of chemicals critical to human life. 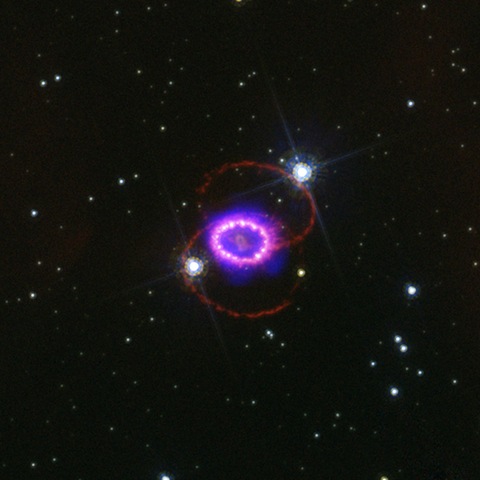 Supernova 1987A is the first star explosion ever to be studied from its beginning. By studying it, scientists are learning about the origin of Earth’s elements like iron, oxygen and carbon.

Supernovae are exploding stars that scientists believe are responsible for a large portion of important elements found on Earth, such as oxygen, carbon and even the iron in human blood.

Through the newly fixed Hubble Telescope, scientists are watching the elements released by Supernova 1987A (SN1987A) and learning how they spread throughout its host galaxy.

Kevin France of the University of Colorado in Boulder has been using the Hubble to study the “star guts” of SN1987A to see how the energetic event impacts the environment around the supernova and how that interaction might be representative of the other supernovae in the universe.

Supernovae produce so much energy that they can shape “how a galaxy evolves over time. There aren’t other processes in typical galaxies that are as energetic as a supernova,” France explains.

What is a supernova?

After a star explodes, it either becomes a neutron star or a black hole.

A “supernova” is simply a fancy name for the explosion that marks the end of a star.

“A supernova explosion is something where you see a star that you hadn’t seen before suddenly turn billions of times brighter than it was,” explains Robert Kirshner, an astrophysicist from the Harvard-Smithsonian Center for Astrophysics.

Stars are made up of several different elements that burn up in chemical reactions. The star at the center of SN1987A ran out of fuel and collapsed in a fraction of a second and then bounced and blasted its material out into the gas between the stars, Kirshner says.

An exploding star ends up either as a neutron star that is as dense as an atomic nucleus and the size of a big city, or it ends up as a black hole where gravity is so strong, even light cannot escape.

Most supernovae occur in very large stars that are unable to support their own weight — at least nine times the size of our sun.

Scientists believe our sun will live for billions of years because it is only a middle-weight star — it does not use up its energy as quickly as other stars.

An explosion close to home

Supernova 1987A is one of the closest supernovae ever to be discovered by humans. It is located in the nearest galaxy to the Milky Way, pictured above.

Supernova 1987A is the nearest exploding tar to be discovered since 1604. It exploded about 150,000 light years away from Earth in the Large Magellanic Cloud, the nearest galaxy to the Milky Way.

As the name suggests, it was discovered in 1987, largely by accident. An observer was exploring the Large Magellanic Cloud with a telescope and saw what he thought was a new star. It turns out the observer was looking at a star in the midst of exploding.

The Hubble telescope was launched into outer space in 1990, giving scientists a front-row seat to SN1987A’s development and enabling them to watch it in realtime.  Although one of Hubble’s main instruments broke in 2004, NASA space shuttle missions had the telescope back up and running in 2009.

Studying the SN1987A, France and his team of scientists have discovered that the supernova emitted several elements, such as oxygen, hydrogen and iron, into the galaxy through its blast waves. The scientists were surprised to see hydrogen emissions brighten over the course of 10 years, suggesting that emissions grew, and more importantly, the emissions were beginning to interact with material in the galaxy.

Some of the material with which the hydrogen is interacting came from the star itself. The Hubble has revealed a so-called “string of pearls” surrounding the SN1987A. The pearls are made up of gas material that the star released before exploding. In the time since the explosion, the supernova’s emissions have been illuminating these balls of gas.

“The new observations allow us to accurately measure the velocity and composition of the ejected ‘star guts,’ which tell us about the deposition of energy and heavy elements into the host galaxy,” France explained in a press release. Scientists speculate that over time, the “pearls” will grow together to form a continuous glowing circle around the supernova.

“In the big picture, we are seeing the effect a supernova can have in the surrounding galaxy, including how the energy deposited by these stellar explosions changes the dynamics and chemistry of the environment,” France said. “We can use this new data to understand how supernova processes regulate the evolution of galaxies.”