Extreme weather in parts of the United States has displaced thousands of families this spring. Residents in the Mississippi River Valley are preparing for historic-level floods and the Southeast is recovering from a record number of devastating tornadoes. 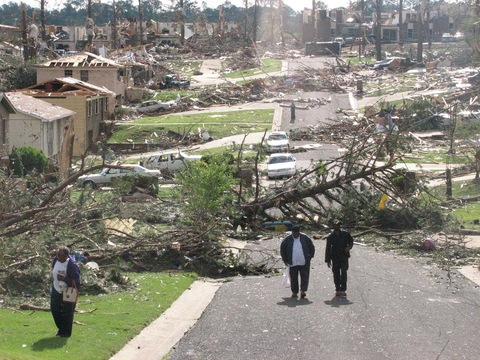 Alabama residents survey what is left of their town after a massive line of tornadoes tore through and destroyed everything in their path.

A record amount of rain combined with an unusually large snow melt has swelled the Mississippi River in recent weeks, causing many residents in nearby towns to stack sandbags around their homes and evacuate.

In Alabama and other parts of the South, a record number of tornadoes spawned by a huge line of thunderstorms wrecked entire towns, killed hundreds and left thousands homeless.

In Tuscaloosa, a city of about 100,000 in central Alabama, residents had about 15 minutes of warning before a huge tornado a mile wide tore through, staying on the ground for nearly an hour. Even though they were warned, most could not escape the storm’s wide path and could only take shelter in basements, closets and bathrooms.

The Tuscaloosa tornado formed out of a supercell thunderstorm, which is a large and long-lived storm that contains a rising current of air called an updraft. That updraft is generally formed by the mixture of warm and cold air, which often results in different wind speeds at the top and bottom of the supercell cloud. The difference in wind speeds, called wind shear, causes the cloud to rotate horizontally.

Sometimes, funnel clouds stay in the air and never touch the ground as tornadoes. However, when they do touch the ground, they can travel very quickly, picking up dust and debris and turning very dark in color.

Scientists continue to study many of the more baffling aspects of tornadoes, such as why only some supercell storms turn into a tornado and why winds sometimes start moving at different speeds to produce a funnel cloud.

Life on a flood plain 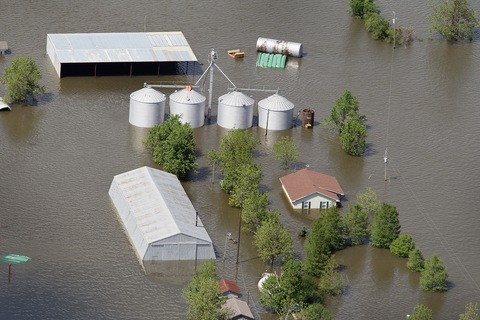 The Army Corps of Engineers intentionally flooded farmland along the Mississippi to keep water from flooding nearby towns.

Large weather systems can also bring a significant amount of rain, which can combine with melting snow in spring to cause flooding. While some flooding is common every year along major river valleys like the Mississippi, this year’s floods are on track to break records.

People who own homes and businesses near rivers or bodies of water are in a “floodplain” – an almost flat area near water that is likely to flood. Buildings in a 100-year floodplain or above have to be insured with flood insurance so they can be reimbursed for damages in the event of a flood. The term “100-year” refers to roughly how often a historic flood comes along in that area. However, the term can be misleading, since many homeowners living in 100-year floodplain experience major flooding more often than just every century.

In other flood-prone countries, such as Japan and The Netherlands, more homeowners are required to purchase flood insurance. The Netherlands, a country almost entirely below sea level, requires people who might experience a historic flood in a 10,000 year span to buy insurance – essentially the entire country.

People who don’t have flood insurance in the U.S. generally receive assistance from the federal government if the president and their state’s governor declare a disaster area. That assistance is usually provided by FEMA, the Federal Emergency Management Agency. FEMA is also providing assistance to tornado victims in Alabama.

“Like on many disasters, we will do a lot of damage assessments and come up with a dollar figure before we declare disasters,” FEMA Chief Craig Fugate told the NewsHour. “In this case, based upon the severity and the magnitude of the individual and family suffering, President Obama declared these. And so we are now coming back after this to count up those damages, so we focus more on getting assistance for the survivors right now.” 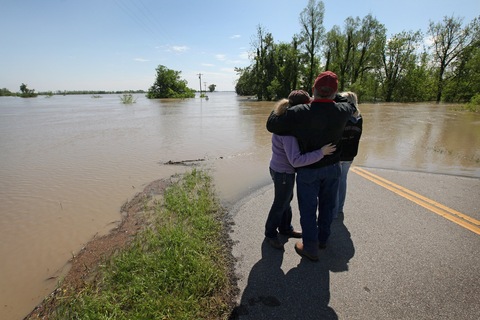 People whose farm was flooded by an intentional levee breach in Missouri look out over their land.

The Army Corps of Engineers, a federal organization responsible for much of the country’s infrastructure, has built barriers, or levees, all along the Mississippi River to control the river’s flow and keep water away from nearby towns.

The massive Mississippi floods put millions of residents in danger, so the Corps faced a choice: either allow the river to inundate the town of Cairo, Illinois, or dynamite one of the nearby levees called Bird’s Point to flood farmland in Missouri instead. They decided to breach the levee and flood the farmland, including about 90 homes. The move brought the river level near Cairo down from 62 feet to 60 feet and also relieved some of the flooding downstream.

The Corps of Engineers may have to breach more levees in the coming days to keep the Mississippi from flooding more towns. Residents in areas flooded by levee breaches generally have about a week to pack up their homes and farms and prepare for the water.

“It’s sacrificing a few to save a lot,” Larry Larson of the Association of State Floodplain Managers told the NewsHour.