Space engineers are making plans to clean up their room. According to the NASA Oribital Debris Program, there are over 19,000 piece of space junk in low orbit around Earth that could cause harm to satellites or the space station. To help tidy up, Swiss research institute EPFL is creating a satellite designed to clean up all that floating junk, dubbed CleanSpace One. 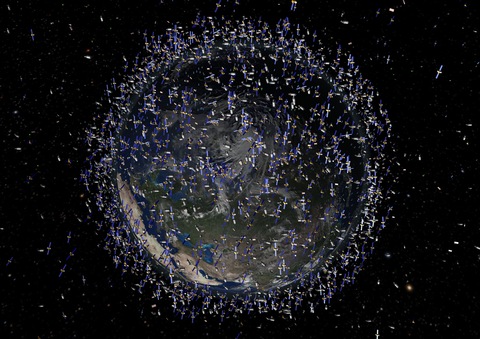 This photo shows a rendering of all the ‘space junk’ currently orbiting Earth.

There are currently 700 operational satellites in orbit around Earth that are used to monitor the weather, transmit television signals, connect cellphones, assist in GPS for directions among many other critical activities.

But there are also useless objects such as chips of paint that flaked off space crafts and launch components that helped space shuttles lift off from Earth. Three years ago, an American satellite collided with a Russian satellite over Siberia and created 1,000 more pieces of junk at least 4 inches wide.

Some of that space junk is big enough to seriously damage or destroy those satellites, which are expensive to build and maintain.

Sometimes pieces of satellites come crashing down to Earth. Last year scientists were anxiously watching an American satellite that was falling out of orbit and predicted that a piece as big as a bus could come crashing down on the United States.  It eventually fell in Canada without hurting anyone.  Nicholas Johnson, NASA’s chief orbital debris scientist, says any one person’s chances of getting hit by debris are tiny — something like 1 in 21 trillion.

But space junk poses a very serious danger to the International Space Station (ISS), where astronauts from around the world live and perform research. The ISS has to constantly maneuver to avoid being hit by debris.
In addition, scientists worry about something called the “Kessler syndrome.”

In 1978, NASA astronomer Don Kessler predicted that at some point, the Earth will end up with a permanent junk belt that could make space too dangerous to fly in. NASA has been working on potential solutions since then, including military lasers that could vaporize small objects in space and lighter lasers that could alter the course of a space object enough to avoid collisions. 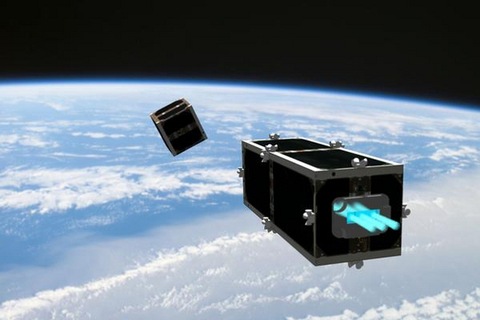 The Swiss-developed space robot called CleanSpace One is designed to find and intercept space junk to keep the debris floating in Earth’s orbit at bay.

Who is building the CleanSpace One and what will it do?

Switzerland, a European country known for efficiency and cleanliness, is willing to fund a different approach.  CleanSpace One will cost $11 million, but the EPFL Labs in the Swiss Space Center hope the price will drop in the future. The project is dubbed the “janitor” satellite because it is being designed to grab pieces of trash and bring them back down to Earth.

To do this, the satellite will use small but powerful engines to propel itself toward a piece of junk. Then it would grab the trash with four metal prongs that fold out from the satellite. This is challenging, because the satellite must approach the trash at high speeds at a specific angle to capture the junk. EPFL is creating a special, ultra-compact electric motor just for this purpose.

However, each “janitor” satellite is actually on a suicide mission because both it and its cargo would burn up upon reentry into the Earth’s atmosphere.

The video below shows how CleanSpace One will work and why it was developed.