A war of words over student loan interest rates shows how hard it is to fix government problems even when most politicians agree that keeping student loans affordable is in the country’s best interest. 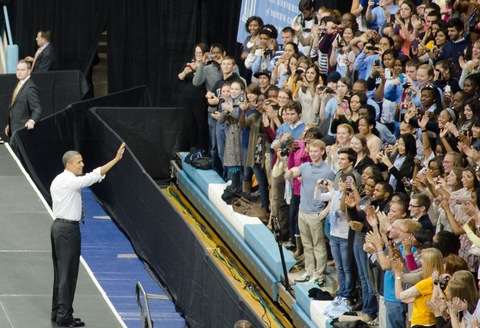 Interest rates on federal student loans could jump from 3.4 percent to 6.8 percent if Congress doesn’t act before July.

This week, President Obama visited three universities and talked to young voters about a potential increase to student loan interest rates that will happen unless Congress acts. In a shrewd move of political messaging, he also appeared on a late night talk show and performed in a slow jam video on the topic that went viral.

During the president’s first stop at the University of North Carolina, he encouraged the young crowd use the Twitter hashtag #DontDoubleMyRate to voice their concerns about the loan rate increase. He also urged students to contact their members of Congress, adding that, “Michelle and I, we know about this firsthand…. We only finished paying off our student loans about eight years ago. Think about that, I’m the President of the United States.”

Republican Mitt Romney, who is poised to run against Mr. Obama in the upcoming presidential election, has also urged Congress to extend the lower rates.

It’s still unclear what Congress will do. A one year extension would cost about $6 billion and Republican lawmakers are working “in hopes of finding a responsible solution that serves borrowers and taxpayers equally well,” according to Rep. John Kline, a Republican from Minnesota who is chairman of the House Education and the Workforce Committee.

What are Stafford loans?

The debate is about a law passed five years ago called the College Cost Reduction and Access Act.  That law lowered the interest rate on federal Stafford student loans from 6.8 percent to 3.4 percent. But the law is set to expire July 1 unless Congress votes to extend it. That would raise the interest rates for an estimated seven million students who currently have Stafford loans.

Interest rates are a percentage of the amount a person borrowed that they must pay back to a lender in addition to what they borrowed. Interest rates are generally how banks and loan institutions make money off of lending money to people.

A Stafford loan is money that the U.S. Department of Education lends to students to pay for college. The money itself comes from everyone’s taxes. Last year, undergraduate students borrowed about $7.4 million through the program.

The debate comes at a time when the amount of money owed in student loans grew larger than the amount owed on credit cards for the first time in history.

Today, all student loan holders in the U.S. collectively owe nearly $1 trillion. According to the New York Federal Bank, the average student loan balance is $23,000, which would cost a student about $220 per month for 10 years after graduation at the current rate of 3.4 percent, or $260 per month if the rate goes up to 6.8 percent.

Student loan activists in New York and some 20 other cities are gathering Wednesday, when student debt is expected to cross the trillion-dollar mark. Among their proposals are that the federal government should cover all higher-education costs.