“Seven minutes of terror” was how NASA scientists described the final blind minutes of the new Mars rover’s descent to the so-called “Red Planet”. Curiosity, a car-sized exploratory robot, completed the dangerous eight month, 354-million-mile trek to land on the surface of Mars’ Gale Crater shortly after 1:30 in the morning on Monday, August 5. The mission hopes to find evidence that Mars was once a life-sustaining planet. 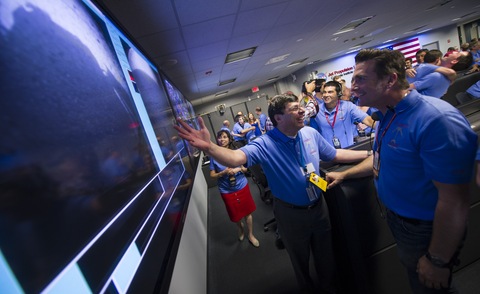 Curiosity’s team leader Adam Steltzner spent years planning out the meticulous sequence of events needed to safely land the rover, which traveled through space at a speed of 13,000 miles per hour. Weighing 5,293 pounds, Curiosity is much larger than previous Mars exploratory vehicles Spirit and Opportunity, and therefore needed an entirely reengineered landing sequence. What scientists came up with was a tricky multi-step maneuver involving a heat shield, parachute, retro-rockets and a sky crane.

“You want to safely get the spacecraft down…and [that] takes different changes in the configuration of the vehicle, 79 events that must occur” Steltzner said in an interview with ABC’s Good Morning America.

The mission was coordinated by NASA’s Jet Propulsion Laboratory (JPL) at the California Institute of Technology. Upon hearing the news, the scientists and engineers at JPL exploded into cheers.

President Obama hailed the event as “an unprecedented feat of technology that will stand as a point of national pride far into the future.”

Goals of the mission

Since touchdown, Curiosity has been beaming back photos of the rocky Martian surface. The rover’s main mission is not to look for life, but “to determine whether the Red Planet ever was, or is, habitable to microbial life.”  This means that the rover will analyze samples of rock and dirt for the necessary “ingredients of life” as we know it, including water. 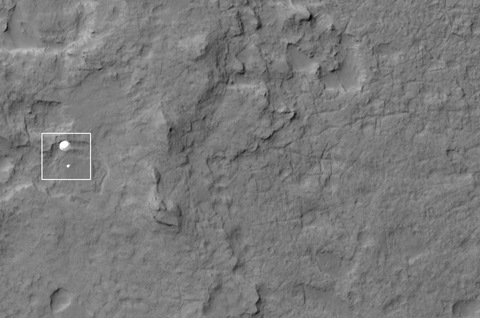 NASA’s Mars Reconnaissance Orbiter caught a picture of Curiosity as it descended to the surface on Aug. 5.

This mission differs from previous ones in that it is not looking for previous signs of life on Mars, only the conditions that make life possible. This subtle shift in mission objectives builds off of discoveries made by Spirit and Opportunity, two rovers launched in 2003 that discovered that at least part of Mars was wet for an extended period of its history.

Spirit’s mission ended in 2011 when it got stuck in some soft soil, but Opportunity is still sending information back to Earth. Both rovers far exceeded expectations for their lifespans, as NASA only planned for them to operate on Mars for 90 days.

A difficult task ahead

Curiosity’s ability to trek through the Mars crater is something no previous rover has accomplished safely. Seventy percent of Mars missions have ended in failure and recent budget cuts within NASA are forcing them to scale back their efforts.

Curiosity’s production and launch was originally budgeted at $1.6 billion, but ended up costing closer to $2.5 billion. The New York Times reports that some of this cost was accrued when the rover crew decided not to rush a 2009 launch because of technical difficulties, and instead waited until 2011 when Earth and Mars aligned again.

Mr. Obama’s 2013 budget intends to cut NASA’s funding from $1.5 billion to $1.2 billion; a cut many scientists fear will spell the end for programs like the Mars rover. With a successful landing that has captured the imagination of the world, and reinvigorated interest in the space program, scientists are hoping to prove the value of funding NASA and space exploration.

The excitement surrounding Curiosity has reminded many of the national fascination for the Moon landings in the 1960s and ‘70s that inspired a generation of Americans to pursue science. Evoking these memories of previous success, Curiosity has the potential to reinvigorate the space program and encourage today’s kids to build rockets of their own.