On Thanksgiving, a Look at Programs That Aim to Feed the Hungry In November, millions of people across America sit down at a dinner table and enjoy a generous Thanksgiving Day meal, but this isn’t the case for everyone. In the U.S. alone, more than 14 percent of households struggle to put food on the table and more than one in four children are at risk of hunger. A majority of the world’s hungry children live in developing nations.

Around the world, 870 million people do not have enough to eat, according to the U.N. World Food Program. With the current population estimated at 7 billion and expected to reach 9 billion by the middle of the century, some programs are focused on coming up with ways to feed an ever-growing population.

The United Nations has been working for more than a decade on a set of eight interrelated goals known as the Millennium Development Goals.  These include halving extreme poverty, halting the spread of HIV/AIDS and providing universal primary education, all by 2015.

Details of the global hunger and food security initiative, called Feed the Future, include improving nutrition for women and young children and ensuring that efforts are “country-led” — meaning the communities and countries affected by hunger are setting priorities and developing programs.

Research shows that successful food production programs help farmers make the leap from feeding their own families to growing enough to sell to others. Technology and education are key, as are nutrition programs for children and new ways of thinking about empty land such as planting community gardens.

To tell the stories of challenges and potential solutions to the hunger crisis, the PBS NewsHour has partnered with the Center for Investigative Reporting, Homelands Productions and American Public Media in a series called Food for 9 Billion.

The reporters have visited countries around the world to document how they are dealing with social and economic change. 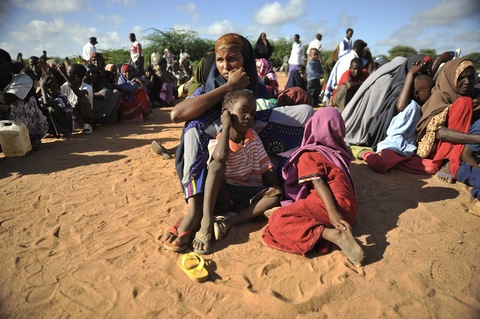 In Somalia more than 3 million people are without the food they need to survive. Three contributing factors are failed harvests, drought and rising food prices.

The challenges are immense. For example, the most populous country in the world, China, is having to deal with a growing demand for meat and dairy that is driving big changes in everything from farming to food safety. Agriculture runoff, mostly manure from large-scale farms, is causing water pollution, and the cost of importing corn and soybeans to feed cows and pigs is threatening to chip away at China’s economic growth. At the same time, Chinese are becoming more outspoken about the need for safe food and a clean environment.

Sometimes solutions are not that hard or expensive. The Philippines has one of the highest population growth rates in all of Southeast Asia and pressure to find more food has led to over-fished reefs. A community-based family planning program has made birth control options like the pill accessible and affordable for the first time in small villages.

And in Kenya, Rwanda and Burundi, an organization called One Acre Fund has brought struggling farmers together to establish a market community and offers them an investment package of seeds, fertilizer, training and market access. To provide a hedge against drought or disease, One Acre’s “market bundle” includes crop insurance. Ninety-nine percent of the farmers repay their loans, and many double their income per planted acre, the group says.

Where are people hungry in this world? How can we measure hunger? Click on the interactive World Food Map below to gather and make sense of data about feeding 9 billion people worldwide.