For the last two decades fighting in the Central East African countries of Rwanda, Uganda, Burundi and the Democratic Republic of the Congo has killed between three and six million people due to a combination of ethnic violence, genocide, extreme poverty, starvation and infectious disease that the International Rescue Committee has called Africa’s “World War.” 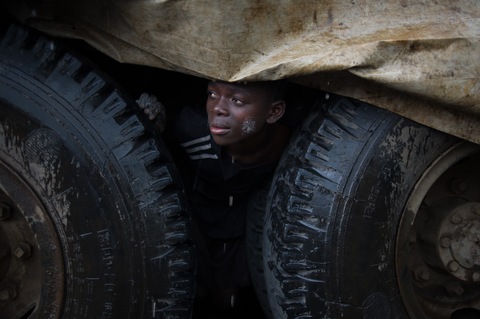 A Congolese boy shelters from the rain under a truck in a refugee camp about six miles from the town of Goma. The camp houses up to 35,000 people who have been displaced by the violence.

Recently, leaders at the United Nations warned that the cycle of violence is gaining strength after a rebel group calling themselves M23 seized Goma, the second largest city in Congo, stating they were there to “liberate” the country and march to the capital, Kinshasa.

Named after a peace agreement in March 23, 2009, M23 claims to be fighting against corruption and bad governance.

The rebels temporarily withdrew from Goma after holding it for 11 days, but the situation remains tense and uncertain in the absence of any tangible peace accord to end the insurgency.

The roots of eastern Congo’s most recent cycle of violence can be traced to the 1994 genocide in neighboring Rwanda, when the world largely stood by as soldiers and militia of the Hutu ethnic group killed 800,000 Tutsis and moderate Hutus.

While the immediate conflict ended after several months, many of the rebels crossed into neighboring Congo and continued their reign of terror. Rebels overthrew longtime dictator Mobutu Sese Seko in 1997, then his successor Laurent Kabila was assassinated in 2001 and succeeded by his son, Joseph Kabila who was re-elected President in 2011. 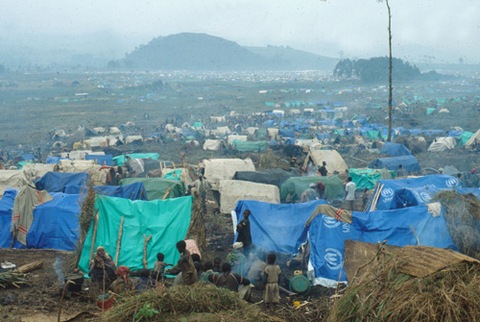 During the 1994 Rwandan genocide, many refugees fled to camps like this located in Congo (then known as Zaire).

As the years passed, the various ethnic groups and rebel forces have continuously engaged in violent armed conflict, drawing in other sub-Saharan countries such as Zimbabwe, Angola, Namibia, Chad and Sudan.

UN and Goma officials say they believe Rwanda is supporting the M23 fighters in an attempt to get at some of the natural resources in the region. The hills near Goma contain gold mines, tin and coltan – a precious metal used to make mobile phones.

There have been unconfirmed sightings of Rwanda Defense Forces assisting M23 units on the ground.

Opinions in Goma are mixed, although the residents would like to live in peace. “Before it was unbearable, there was so many killings, so much violence,” said Rinoni, a young hairdresser, reported the Christian Science Monitor. “The M23 definitely brought some kind of stability the FARDC [Congolese Army] were never able to give us.”

One young soldier who had been working for M23 for a couple of months said, “All armed groups are the same in Congo. It is just for money; whichever side wins I’ll join, most the groups are like this.”

Secretary of State Hillary Clinton met with Rwandan President Paul Kagame and Congo’s President Joseph Kabila at the UN General Assembly Meeting in New York in September to urge them to find a peaceful solution to not only M23, but the underlying issues that were fueling the rebel group.

The administration also suspended $200,000 in military aid to Rwanda, the staunch U.S. ally, who investigators say is funding the rebel group. But human rights groups say last week’s actions by M23 are proof that not enough has been done diplomatically.

The Obama administration dispatched the top U.S. diplomat for Africa, Johnny Carson, to Central Africa this weekend to help negotiate an end the latest crisis.