China is the world’s fastest growing major economy, but the resulting pollution from factories and vehicles has made it dangerous for some city residents to breathe the outside air. In January 2013, a thick cloud of smog hovered over the capital Beijing for weeks, causing health problems and raising questions about how to balance economic growth with a livable environment. 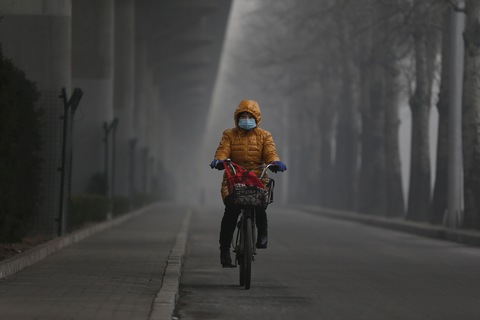 A woman wears a mask while riding a bicycle on the street during severe pollution on January 23, 2013 in Beijing, China. While masks may keep out some larger pollution particles, they are not very effective against fine particles.

The American Embassy in Beijing has been monitoring pollution from its roof since 2008. They system measures the number of fine pollution particles in the air and issues an Air Quality Index (AQI) score. Any number under 50 means it is safe to breathe, a score between 50 and 300 is unhealthy, and anything higher means people should not venture outdoors at all. The smog last month measured 750.

Hospitals were overwhelmed by residents coming in with difficulty breathing. Children and the elderly are more at risk. Sales of masks and air filters skyrocketed, but much of the pollution consists of particles too small to be blocked by anything other than a professional-grade gas mask.

The thick smog cloud was caused by a “temperature inversion,” meaning that cooler air and pollution from nearby coal-burning factories was trapped low in the atmosphere. It cleared February 1 when the temperature higher in the atmosphere cooled off and the winds picked up. But the index continues to climb periodically into the 200s and the scare has mobilized residents and the government into action.

What is being done about it?

In response to the crisis, the government temporarily closed 100 factories and took many government vehicles off the road. Beijing asked Chinese citizens to set off fewer fireworks for this year’s New Year’s celebration, which begins February 10th. Fewer fireworks are being produced and fewer retailers will be selling them.

Public anger has forced politicians to address the concerns of citizens. Wang Anshun, the newly appointed mayor of Beijing, told the legislature that the government must come up with a plan to curb the pollution.

“I hope we can have blue skies, clean water, less traffic and a more balanced education system,” Mr. Wang said at a session of the legislature, adding that “the current environmental problems are worrisome.”

The government announced plans to use clean fuel in government vehicles and plant trees over 250 square miles of land in the next five years, the state news agency, Xinhua, reported.

However, officials are still calling the dark air “fog” instead of “smog”.

Due to the government’s censorship of the media, Chinese citizens took to microblogs to get information and discuss the situation. On one microblog, businesswomen Zhang Xin reminded people that after thousands of people died as a result of air pollution in Britain in the 1950s, the government passed strict laws to improve air quality, the New York Times reported.

As Twitter feeds displayed photos of smog-filled streets and cloudy landscapes, the state-run news agency was forced to report on the pollution problem and the official reaction to it.

But the road ahead is tricky as the government tries to balance concerns about pollution and the negative international attention with China’s powerful factory owners and industrial leaders who have brought China immense wealth and positioned the country to surpass the United States in total economic activity in the next few years.