A secret Justice Department document revealed this week outlines legal arguments for using drone aircraft to target and kill American citizens living abroad who are connected to the al-Qaida terrorist network and pose a “present an imminent threat to national security.” 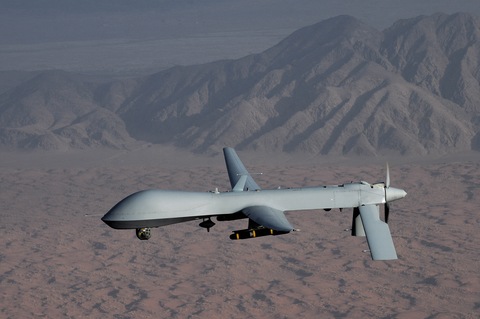 Unmanned drones like this MQ-1 Predator can be flown anywhere in the world by pilots sitting behind their desks in the U.S.

The leaked document was a background report given to Senators who are members of a committee that works with the president on military and intelligence issues.

Why would the government want the power to kill Americans abroad?

In 2011, an American-born al- Qaida leader was one of 3 Americans killed in a U.S. drone strike in Yemen. Anwar al-Awlaki had connections to terrorist organizations, but his 16 year old son, who was also killed, did not, according to his family.

The leaked document suggests that the government is working to defend itself against civil liberties groups who argue such attacks deprive U.S. citizens of constitutional rights and protections.

Hina Shamsi of the American Civil Liberties Union (ACLU) says the document gives the government too much power. “What appear like restrictions are no restrictions at all. You can see how it is easy to manipulate,” she said on the NewsHour.

The ACLU has filed lawsuits against the U.S. government challenging the legality of the drone program.

Responding to the criticism, Attorney General Eric Holder clarified, “We say that we only take these kinds of actions when there’s an imminent threat, when capture is not feasible and when we are confident that we’re doing so in a way that’s consistent with federal and international law.”

How are drones used?

The controversy highlights a growing unease with the nation’s drone program.

Unmanned Aerial Vehicles (often called UAVs) are gaining popularity around the world; though the US is the largest user of drone technology, at least 11 other countries use UAVs as well.

Drones are controlled by pilots on the ground who use cameras and remote control to fly.  They have been especially helpful to the military in the fights against terrorists in mountainous areas of Afghanistan and Pakistan.

Much of the U.S. drone program is kept secret, even from the members of Congress who are supposed to be voting on drone use. However, it is known that there have been over 300 drone strikes and over 3,000 people killed by the strikes. It is unclear how many of those killed were civilians.