Is Gun Violence a Matter of Public Health? After recent mass shootings, debate over gun violence has focused on law enforcement and crime. However, with 30,000 people dying each year from gun shots, organizations such as the Centers for Disease Control (CDC) are advocating a new approach to the problem, saying that framing gun violence as a public health issue may have the best chance at reducing gun deaths. 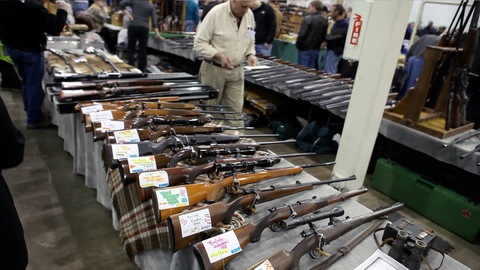 People who only sell guns at gun shows like this one are often not required to perform background checks on buyers, unlike stores or full-time dealers. This is often referred to as the “gun show loophole”.

When people think of a public health crisis it’s generally a disease or epidemic (West Nile or dangerous e-coli in meat, for example), not accidental discharges, homicide or suicide. However, the CDC estimates that firearms cause work-loss, rehabilitation and emotional trauma costs of over $60 billion a year.

By declaring something a “public health crisis,” the government activates the power to pay for studies and prescribe solutions.

The controversy over funding gun research

The government used to fund studies aimed at reducing gun violence. But during a 1996 Congressional debate over funding for the CDC, gun advocates lobbied to have a single sentence inserted into the final appropriations bill: “None of the funds made available for injury prevention and control at the Centers for Disease Control and Prevention may be used to advocate or promote gun control.”

Shaun Kranish, an avid marksman and gun enthusiast, explained that research that focuses on guns is politically motivated.

“We do have a violence problem in this country, but it is a complex issue. And this whole discussion is really just centered around trying to bring some legitimacy to the idea of prohibiting guns, despite the fact that access to firearms is a guaranteed right as a free society,” he told the NewsHour.

After the bill was signed into law, the $2.5 million dollars that had been spent researching firearms in 1995 was diverted to researching brain injuries.

In January, President Obama issued 23 executive orders meant to curb gun violence, one of which calls on the CDC to reboot gun violence causes and solutions. st chance at reducing gun deaths. 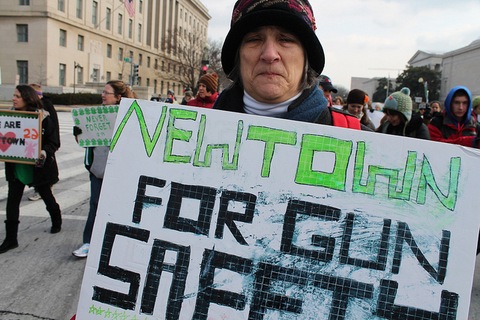 Gun control advocates march on Washington to show their support for stricter gun laws on January 26, 2013. via Flickr (Elvert Barnes)

Dr. Michelle Gittler, an expert in spinal cord injury and paralysis who treats gun injury victims in Chicago, is an advocate for the public health approach to gun violence.

Jens Ludwig, is another academic researcher who runs experiments at the University of Chicago’s crime lab.

“We identified 2,700 kids, and 2,700 boys grade 7-10 living in a variety of South and West Side Chicago neighborhoods. And, then, like in medicine, we randomly assigned some to get program services and some to be a control group.”

After targeted counseling sessions meant to educate teens on controlling dangerous impulse behaviors, the 2,700 students who attended were 44 percent less likely to be arrested for violent crimes than those who did not.

“One of the key characteristics of the public health approach,” said Ludwig, “besides its reliance on data and rigorous evaluation using clinical trials, like in medicine, is to try and be more preventive, to think, what can we do for kids who are on trajectories that might lead to some sort of bad outcome?”