Editor’s note: On Tuesday, Los Angeles Unified School District (LAUSD) and United Teachers Los Angeles (UTLA) reached a tentative agreement on issues surrounding the LA teachers’ strike, which began on Jan. 14th. Read these three perspectives to hear why teachers have chosen to strike — or not to strike. According to LAUSD’s website, the district remains committed to contract negotiations and will continue “to find solutions to end the strike which will hurt students, families and communities most in need throughout Los Angeles.”

Teacher Voice: “I crossed the line”

As a second-year teacher in the Los Angeles Unified School District (LAUSD), the bargaining between the union and the district has been looming over my head since my job began.

I’ve tried to focus my attention on developing as a teacher and providing my students with a solid education. However, I have increasingly found myself in the middle of a battle between the two sides. In the end, I decided not to strike. I made this decision based on my experiences with the union, my own research and what I believed to be best for my family.

It’s fair to expect some level of frustration from striking teachers. I support their right and decision to strike. But I felt the district made several fair offers in the past couple of weeks based on the money available.

Even as a teacher starting out on the low end of the salary scale, my $51,000 per year is helping my family get by just fine.

In regard to the issues, my biggest concern is class size. I have classes with more than 40 students at times, and it does make teaching more difficult. I’m glad the union is fighting this battle. I would love it if the union could negotiate a class size of 20, but that’s not a financial reality for the district right now. I would also ask if teachers were willing to give up the demands for a 6.5 percent raise in order to provide the finances required. Though many argue teachers shouldn’t have to decide between the two, the budget says we do right now.

Additionally, I don’t think LAUSD teacher pay is unfair. Even as a teacher starting out on the low end of the salary scale, my $51,000 per year is helping my family get by just fine, not to mention the amazing benefits that include free health, dental and vision for my whole family. Many of my colleagues are likely making anywhere between $60,000-100,000 a year, before calculating in the $20,000-30,000 worth of benefits. There’s also the generous pension, which will be eating up close to half of LAUSD’s budget by 2030. I understand many of those striking don’t necessarily share this attitude.

At the end of the day, my decision was not solely about finances or fear of losing my job. The administration at my school communicated to teachers that there would not be repercussions, regardless of our decision to strike or not. Over time, United Teachers Los Angeles (UTLA) union meetings have largely felt like an echo chamber of opinions with the usual UTLA talking points. A colleague once asked, “Doesn’t the nature of bargaining ultimately mean both sides have to make compromises?” The UTLA rep responded by asking why she would think teachers would have to give anything up. While most of my colleagues may not have a problem with this kind of environment, I do.

As I left work after crossing the picket line on the first day of the strike, fellow teachers booed and shouted “Shame!”

As I left work after crossing the picket line on the first day of the strike, fellow teachers booed and shouted “Shame!”

I was shocked. Whatever their intention, their actions only made me more confident that I didn’t want to be on a picket line with people who treated others that way.

Teacher voice: “I walk the line”

Like many of my colleagues, I have been dreading the LAUSD teachers strike. If you have only been paying attention to the big network media then you probably have the perception that this strike is all about teacher salary demands. It is not.

Teachers go into the profession with a higher purpose, a greater sense of mission, and the understanding that we will not become rich, unlike many of our similarly educated peers who practice medicine, practice law, or devote their lives to business. If the District’s proposed salary increase was 6 percent, that would represent approximately $420 per month to my family. I have already lost that by going on strike. The District’s actually salary increase is staggered out over two years and conditional on several financial variables. So it’s really a 3 percent raise, or $210 per month. Not really strike-worthy in my opinion.

This strike is about three main issues for me:

Over the past 10 years, our school board has become a battleground between pro-charter and traditional public school preservationists. Our latest superintendent Austin Beutner has no experience in education, which is important because teaching is a collaborative and collegial profession. Teachers want to be inspired by innovative educational leaders. We are not getting that from this guy.

Class size reduction: This district continues to raise class sizes, as high as 39 in elementary schools and 46 in secondary schools. Beutner has advocated for broadening the language in the contract and include it in Special Education classrooms also. The Union wants this language stricken from the contract. No other district in California has such a provision. 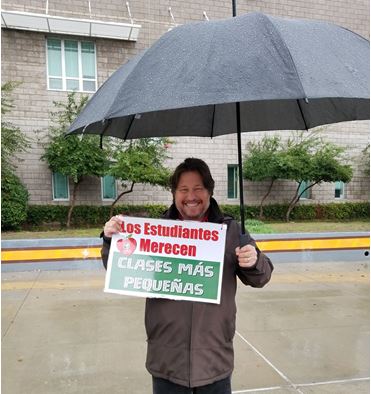 The Los Angeles Times acknowledged that L.A. Unified has hidden money in the past. Beutner states LAUSD is in a financial crisis and has had a running deficit for many years. However accounting from the district shows that it has had surpluses every year ranging from $210 million to $517 million since 2013-14. I don’t know who to trust. This is why I walk the line.

School safety: We live in a time of increasing anxiety about violence in our communities. School shootings are becoming more prevalent. Social media threats against schools and individuals at schools are made regularly. Yet 80% of our schools do not have a full-time nurse. Here’s what happens to those schools in an emergency situation. I worked at a school in East LA where one of my students was stabbed in the cafeteria by another student. Having social workers, psychiatrists, and medical personnel are essential in an urban environment. In my opinion the District is risking lawsuits for negligence if they continue to underfund school safety personnel. This is why I walk the line.

If you have only been paying attention to the big network media then you probably have the perception that this strike is all about teacher salary demands. It is not.

Many of my colleagues believe that LAUSD wants to raise class sizes to intentionally drive middle-class parents out of the District. With the middle class parents diminished, the “complainers” will eventually vanish. As it stands now, the district is able to reduce or eliminate programs and services to low income students, which will enable them to label even more schools as “failing” and justify closing them or handing them over the charter operators. If we sit idly by and wait to find out if this is true it will be too late to save public education in Los Angeles. This is why I walk the line.

Teacher voice: “We are still teaching our curriculum” Teacher Diane Wilson and and a colleague protesting during the Los Angeles teachers’ strike. Photo courtesy of Diane Wilson

Combining two careers, postal worker and teacher, I’ve worked in union jobs for over 35 years. My dad (retired) was a committed union worker. He taught us that “whatever you do, do it well.”

As I found myself chanting U-T-L-A!, clutching the handrail of a packed city bus leading to the generally austere L.A. metro (today standing room only on every car), it hit me in that moment, square between the eyes, that my challenges as a public school teacher were mirrored through 30,000 additional pair of eyes, and that this was a moment — lightning let loose — to capture the attention of the nation regarding the short term/short-sighted reality of public school funding.

At my current school site, we share roughly 1,900 students, a beautiful library stocked with books and no librarian.

If we continue to call ourselves the land of opportunity, then it behooves us to mean what we say. At my current school site, we share roughly 1,900 students, a beautiful library stocked with books and no librarian. The shelves, full of books the students might want to read, accumulate dust. The computers flicker faintly on silent, figuratively and literally. We sometimes have a nurse. Luckily, our specific school is staffed with counselors (read plural) and our class sizes are manageable. Two miles down the street, our neighboring high school cannot boast the same. For almost 17 years, prior to my current school site, classes over 40 were the norm, never the exception. In cramped quarters, the quiet students’ silence is deafening.

Yesterday, in a steady downpour (sing with me–“It never rains in Southern California…”) thousands upon thousands of dedicated educators who had never laid eyes on each other before this moment, raised their collective voices for their deserving students. No one would deny that a pay raise helps one to feel valued, but we were outside our classrooms and on the streets, en masse, to speak for our students who deserve better than they’ve been given, who deserve the best education that Los Angeles, the city of hope, has to offer, who deserve for their dreams to become their reality.

Shouting through the tunnels of the city, parading over the parking lot-ish freeway to sounds of sympathetic commuters, we were heard. And, at the end of the day, shivering on another overcrowded bus, my present reality, smiling and chatting with people I might never meet again but I now know as sisters and brothers, I couldn’t help but wonder what my students were doing. Do they truly understand that by electing to be on the street, we are still teaching our curriculum? In empty classrooms, the silence is deafening. Scott Petri has taught social studies at the middle school level and high school level since 2003. He has also served as a coordinator and small school principal in Los Angeles Unified School District. He holds a Doctorate in Educational Leadership and a Masters in Educational Administration from California State University Northridge, and a B.A. in Political Science from the University of San Diego. Dr. Petri is a board member of the California Council for the Social Studies and the past President of the Southern California Social Studies Association. He blogs at https://historyrewriter.com/ and tweets @scottmpetri. Diane Wilson teaches at Social Justice Humanitas Academy, part of Cesar Chavez Learning Academies in Los Angeles. She is a National Board Certified Teacher with an M.A. in American studies.

If you think you might have a good idea for an opinion piece, consider sending a pitch for PBS NewsHour’s Teachers’ Lounge blog. The blog is full of powerful, original pieces by educators on how current issues and events affect life inside schools. Write vpasquantonio@newshour.org for more information.