On the corner of Washington Place and Greene Street, in New York City’s Greenwich Village, is a bronze plaque affixed to the Neo-Renaissance façade of the Brown Building—now part of New York University. The building, it says, is listed on the National Register of Historic Places and as a National Historical Landmark. Only 110 years ago, this now-vertical classroom and office building was once the site of the Triangle Shirtwaist Factory. Shirtwaists, the fashion a la mode, were cotton blouses, requiring no corset or hoops. The demand for the Triangle shirtwaists among working women in New York and beyond was enormous. In the factory, the foremen did everything they could to keep the women sewing to prevent “the interruption of work.”

The Brown (then called the Asch) Building, constructed in 1901 of steel and iron, was advertised as “fireproof” and, hence, attracted several garment factories. The Triangle firm occupied the 8th, 9th and 10th floors, at the top of the building. The building offered few working bathrooms, faulty ventilation, and outmoded heating and cooling systems. The stairwells were poorly lit and hazardous. More egregious, it had no overhead sprinklers and only a single fire escape, which was neither durable nor big enough to accommodate all of the people working in the building in the event of a fire.

Added to these risks, the Triangle Company stored flammable products and chemicals on its production floors. Working cheek by jowl, the seamstresses sat at tightly arranged rows of sewing machines and cutting tables. All over the floor were clippings of flammable fabric. Under one of the work bins, where 120 layers of fabric were once stored, a spark turned into a flame and spread to the tissue paper shirt patterns, or templates, hanging from the ceiling. 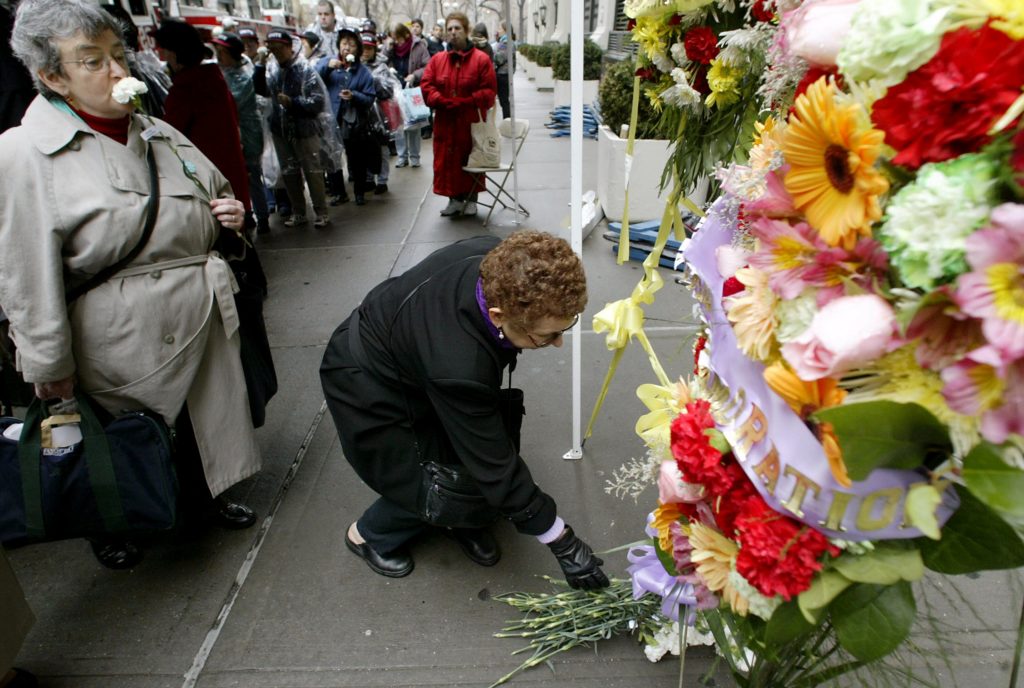 A woman places a white carnation at the site of the 1911 Triangle Shirtwaist fire at Washington Place and Greene St., where 146 garment workers, mostly immigrant women, died. As a bell tolled for the 93rd anniversary, students and workers each laid a carnation on the ground after reading a name of one of the dead.(Photo by Mike Albans/NY Daily News Archive via Getty Images)

The fire soon spread from worktable to worktable, gaining speed, heat, and venom with each passing second. Many died of smoke inhalation. Others, who could not find a means of escape, burned to death. And there also were the indelibly horrific images of the young women who jumped out of windows to their deaths, because the stairwell doors were locked shut and the elevators were out of order.

The New York City Department arrived but their ladders reached only as high as the 6th floor of the building, two entire floors below the fire. The mounting dead—covered in tarps— were arranged in rows along the sidewalk by the city coroners for the newspaper photographers.

More than 350,000 people marched in the funeral procession for the Triangle victims. Activists kept their memory alive by lobbying their local and state leaders to do something in the name of building and worker safety and health. Three months later, John Alden Dix, then the governor of New York, signed a law empowering the Factory Investigating Committee, which resulted in eight more laws covering fire safety, factory inspection, and sanitation and employment rules for women and children. The following year, 1912, activists and legislators in New York State enacted another 25 laws that transformed its labor protections among the most progressive in the nation. Many of these reforms—all proposed to protect the health and safety of the American worker—were swept into federal law during the New Deal. Years later, in 1970, the Occupational Safety and Health Act was passed and created, “whose primary mission is to ensure that employees carry out their tasks under safe working conditions.” It remains a critically important agency in the lives of working Americans.

The Triangle Fire of March 25, 1911, destroyed hundreds of lives — both those who died and their families. Sadly, it required the ashes of 146 people to redesign and reimagine the workplace of the early 20th century. Once a dirty and unsafe place, filled with dangerous machines and, before child labor laws, small children, American factories and offices are now far safer than they once were only a century ago. Nonetheless, as new technology and manufacturing processes develop, we must remain vigilant in ferreting out and preventing the health risks they impose to workers and consumers. Now, as then, we must always remember the horrific flames of the Triangle.