Most Americans do not support the prospect of the nation’s highest court overturning Roe v. Wade, according to the latest PBS NewsHour/NPR/Marist poll, and public confidence in the Supreme Court is plunging.

In the wake of a leaked draft opinion from the high court suggesting a majority of justices want to eliminate federally protected abortion rights, more than half of Americans say they have little to no faith in that institution, and nearly half say the draft decision makes them more likely to vote this November.

The 1973 decision has guaranteed pregnant people a constitutional right to abortion for nearly 50 years. This national poll is the latest to show broad support among Americans for protecting abortion, including a Washington Post-ABC News poll from May 3 that found a similar 2-to-1 ratio favoring upholding rather than overturning Roe. 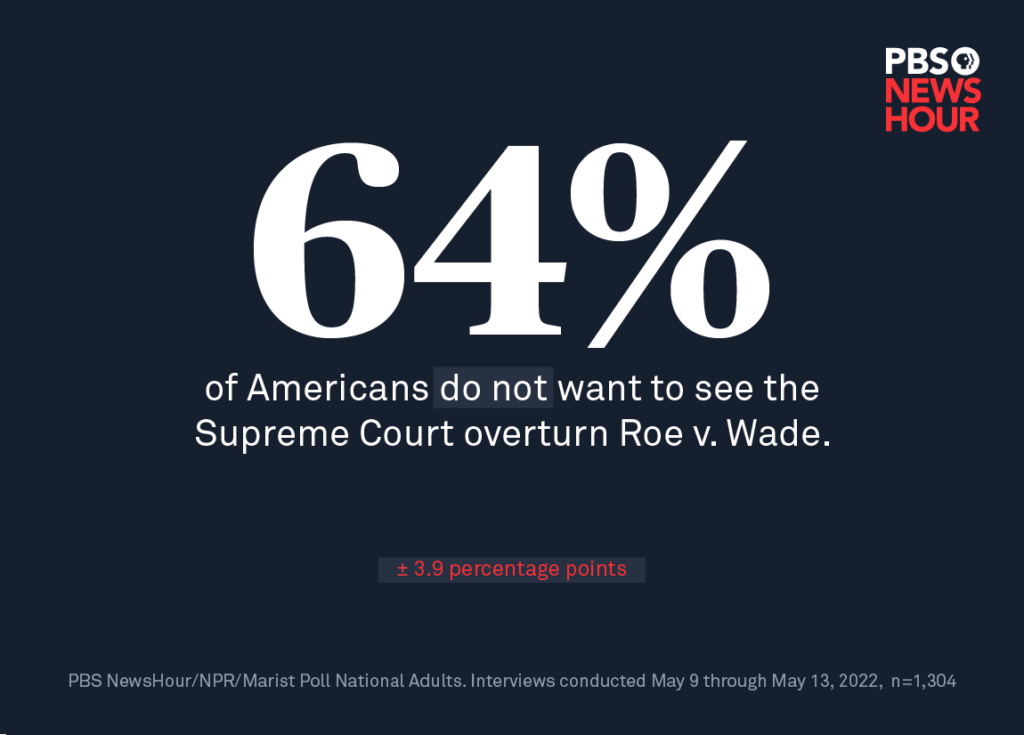 That opposition was strongest among Trump voters, people who didn’t graduate from college and Americans age 75 or older, while notable supporters of abortion rights included seven out of 10 women in both small cities and suburban communities. 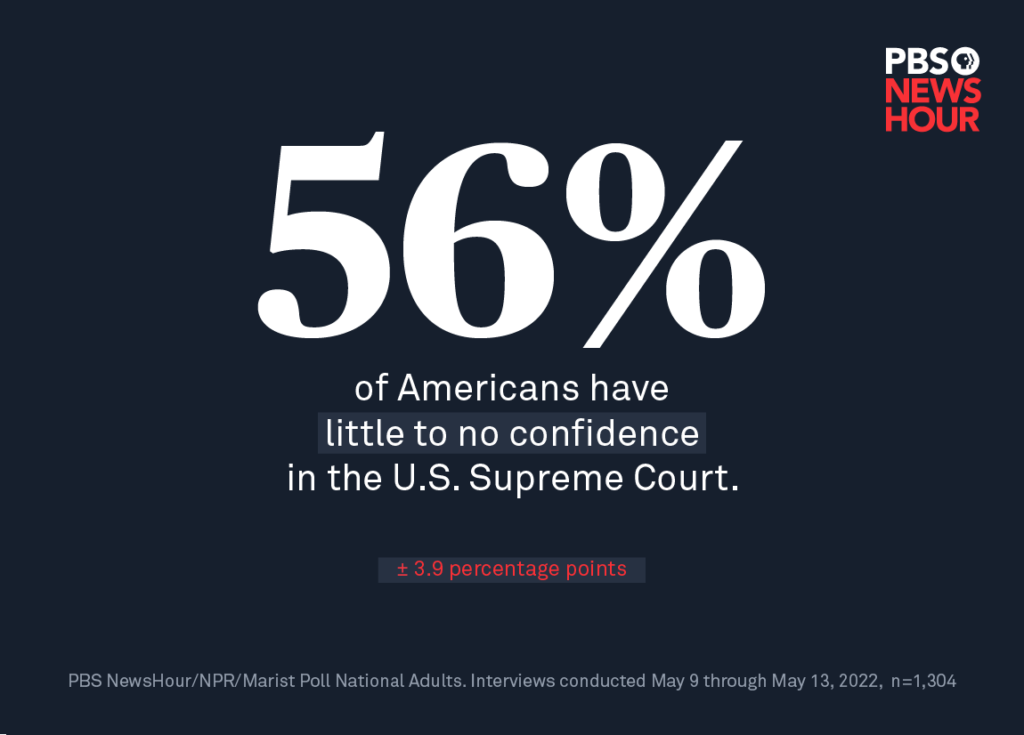 At least three out of four Americans reject the idea of restrictions that fine or imprison doctors who perform abortions, or laws that allow private citizens to sue others who help someone get an abortion, according to this latest national poll. Americans were split over whether people should be allowed to receive prescription medication to induce abortion in the mail. About two-thirds of Americans support safe haven laws that allow people to seek an abortion from out-of-state, such as the measure Connecticut enacted shortly after the Supreme Court’s decision was leaked.

The case being considered by the court is Dobbs v. Jackson Women’s Health Organization, which focuses on a 2018 Mississippi law that banned abortions after 15 weeks gestation, except in cases of rape, incest or when the pregnant person was at immediate risk of dying, or the fetus would not survive outside the womb. The state’s lone licensed abortion facility and one of its doctors filed a lawsuit seeking to challenge the restriction. In this latest poll, U.S. adults were split over banning abortion at that point of pregnancy, with 48 percent supporting it and 49 percent opposing it.

The court’s draft majority opinion suggested the Constitution did not address restrictions against abortion, thus kicking decisions about abortion legality back to the states.

If that happens, “you’re going to have very different laws in red states versus blue states,” said Jessica Taylor, the senate and governors editor for The Cook Political Report, who added that the change would abandon “a national standard.”

In the years since Mississippi’s law was signed into law, Texas, Oklahoma and several other states have put even more draconian measures into place to restrict or ban abortion and resulting in fewer clinics that are allowed to offer abortions and more logistical barriers for patients, including the cost of travel, hotel and child care. On May 3, Oklahoma Gov. Kevin Stitt signed into law a ban on abortions after six weeks. More than a dozen states have enacted trigger laws to ban abortion if Roe v. Wade no longer stands. Twenty-six states are poised to ban or severely restrict abortion if Roe is overturned, according to an analysis released in October by the Guttmacher Institute. 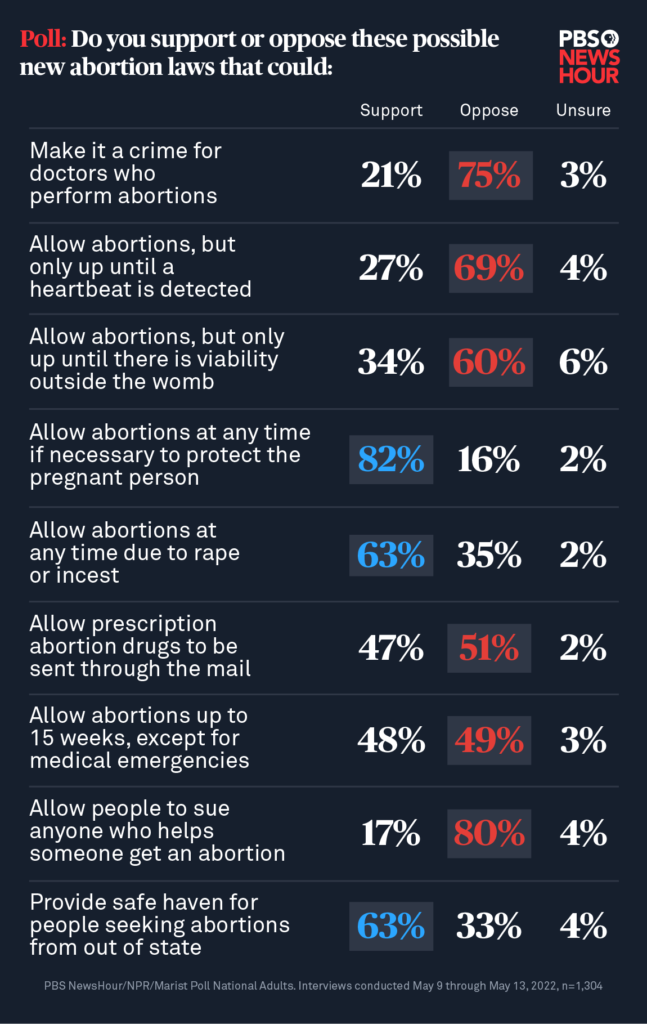 Many Americans have believed that abortion rights were safe and their removal was “not going to be an issue that’s actually going to be at their doorstep,” said Nancy Northup, president and CEO of the Center for Reproductive Rights, an abortion and legal advocacy group that has argued before the Supreme Court to preserve access to abortion services.

“The leaked draft opinion totally brought home that this is not some hysterical concern from those of us who have been in the trenches on abortion rights, but is on the brink of happening,” Northup said.

As the high court prepares to hand down its final ruling, this latest poll shows how public faith in that institution has been shaken. Seven out of 10 people who say they support abortion rights and nearly two-thirds of women say they have little to no confidence in the high court, as do 56 percent of U.S. adults overall. That’s a dramatic change of 18 percentage points from nearly four years ago, when 38 percent felt the same way – a time before Justices Brett Kavanaugh and Amy Coney Barrett were confirmed, tilting the ideological balance to a conservative majority.

“The leak has burned the reputation of the court, but this is almost to be expected as a further manifestation of abortion politics destroying everything it touches,” said Roger Severino, a visiting fellow with the conservative think tank Heritage Foundation who served in the Department of Health and Human Services’ Office of Civil Rights throughout the Trump administration and staunchly opposed abortion rights. He regards the upcoming midterm elections as a moment for the American people to “have their own voices restored.”

Overturning abortion rights in the U.S. has been a long-held goal among many Republicans, Severino said, adding that the “American people are on the cusp” of ending a “regime of abortion on demand.” 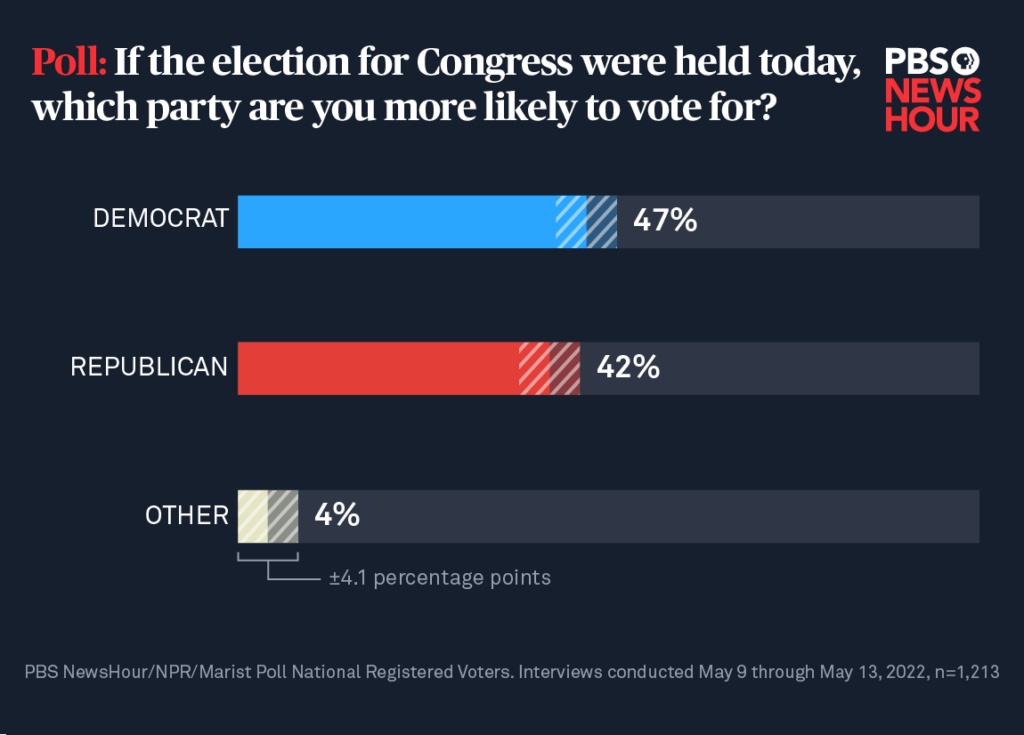 Democrats, at 66 percent, were more likely than Republicans and independents to say the leaked draft opinion would be a motivating factor in the decision to vote this November. The most profound threat to abortion rights in nearly a half century might be mobilizing Democrats ahead of this year’s midterm elections, echoed Taylor. But she said questions over abortion could also help Republican fortunes in certain gubernatorial and other state-level races in the months ahead. According to a recent Monmouth University poll, 25 percent of U.S. adults said abortion was their top issue, surpassed only by 26 percent of Americans who said the economy was their most important issue.

And while President Joe Biden’s approval numbers have stalled out in the high 30s or low 40s, Democrats in general are seeing a little bump compared to last month. When asked which party they’d be more likely to support in November, 47 percent of U.S. adults say they plan to support their Democratic congressional candidate versus 42 percent who say they will back the Republican – almost a swap of what we saw as recently as April.