Forty-seven percent of Americans say they wouldn’t vote for a congressional candidate who supports impeaching President Donald Trump, while 42 percent said they would, a new PBS NewsHour/NPR/Marist poll shows.

Another 10 percent said they were unsure how they would vote if a candidate supported an effort to impeach Trump, the poll found. The survey was released Wednesday, as Trump faced mounting legal challenges from both Special Counsel Robert Mueller’s Russia investigation and a separate probe by federal prosecutors into his longtime personal lawyer Michael Cohen. 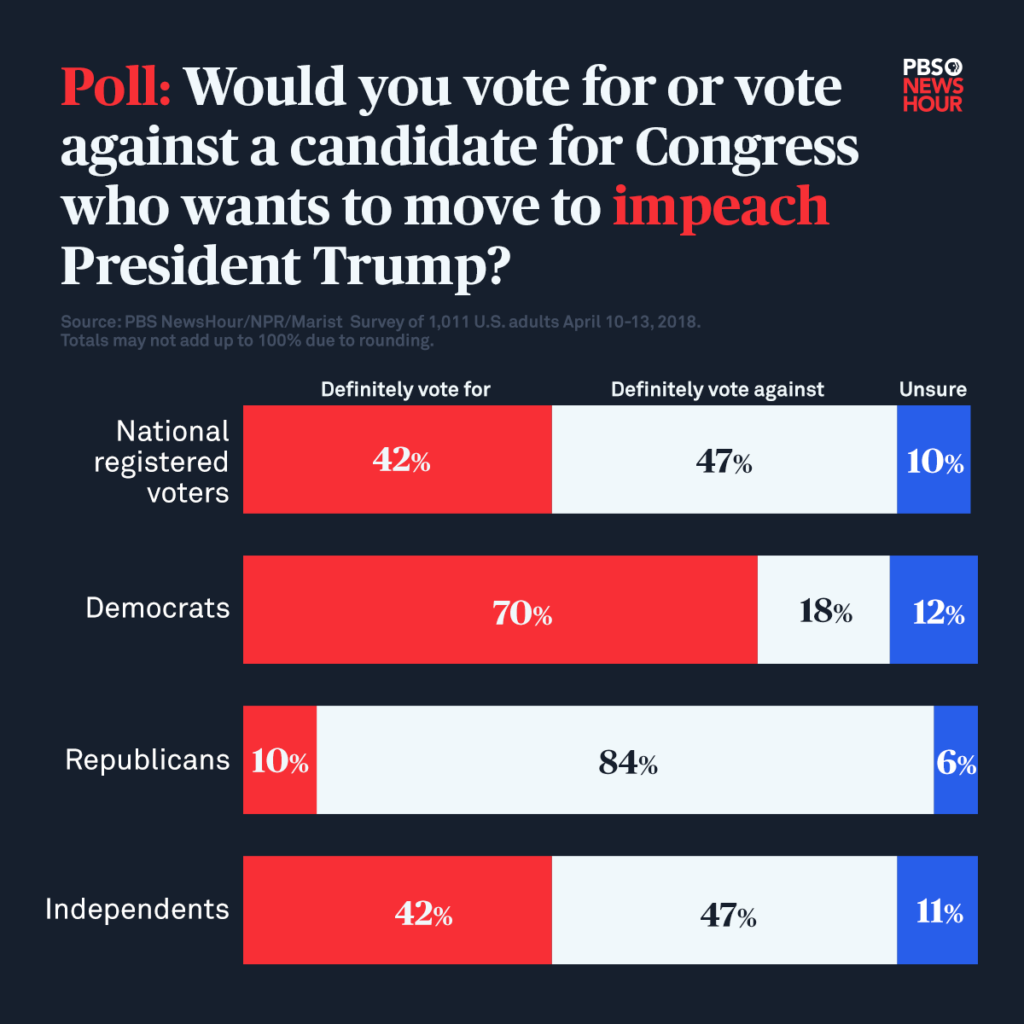 However, 10 percent of Republicans also said they would back a candidate who wanted to see the president impeached, a sign that some voters on the right may be open to an effort to remove Trump from office.

One thing voters are sure of? They would like Congress to take care of a few key issues.

At the same time, Trump remains unpopular in this month’s poll. The president’s favorability has not been above 40 percent in the NewsHour/NPR/Marist poll since before he entered office. His favorability has been slightly higher in other polls, including a Rasmussen survey that Trump touted on Twitter over the weekend.

As this fall’s midterm elections creep closer, the president’s low approval rating could be a concern for Republicans trying to maintain control of the House and Senate. But, according to the poll, neither party has a significant advantage in an election that could flip control of Congress.

Democrats hold just a 5 percent advantage over Republicans among all registered voters, and only a 6 percent lead among Independents. Still, with about seven months to go before the midterms, it’s too early to tell how things will shake out for either party.

One thing voters are sure of? They would like Congress to take care of a few key issues. When it comes to guns, a majority of voters feel that passing stricter gun control legislation should be an immediate priority for Congress, while less than a third think it should not be a priority at all.

Additionally, 72 percent of voters said reforming health insurance was another immediate priority for Congress. On this issue, Democrats and Republicans agree that lawmakers should put health care at the top of their list.

And a majority of voters said Congress should grant legal status to so-called “Dreamers,” the young, undocumented immigrants brought here illegally as children who are protected from deportation by the Obama-era Deferred Action for Childhood Arrivals program. Trump moved to end DACA last year, but the program remains in limbo pending several legal challenges and inaction by Congress. Sixty-seven percent of Republicans said that granting legal status to DACA recipients should be a priority for Congress, a sign of DACA’s bipartisan appeal.

And contrary to Trump’s frequent calls to build a wall along the southern border of the United States, a majority of Americans overall believe the proposal should not be a priority at all for Congress. The project remains popular among Republicans, but not overwhelmingly so; just 52 percent of Republicans said they feel it should be an immediate Congressional priority.