When people drive by a car accident, they have a natural tendency to slow down, turn and look. Our minds and our gaze cannot help but rubberneck, even though we know it can cause traffic headaches.

People appear to have the same reaction to media coverage of mass violence, and seeing and sharing those horrific scenes through media appears to hurt us, according to a study published Wednesday in Science Advances.

When people view news of a mass killing, the report shows, they not only develop symptoms of post-traumatic stress, but also become more likely to watch coverage of a subsequent mass tragedy.

The pattern creates a cycle of distress, wherein viewers can experience trauma-related flashbacks, yet repeat their media consumption of mass killings and then exhibit additional signs of trauma.

Should the hosts or purveyors of the content, such as news outlets and social media platforms, be held liable for this harm?

“There’s this perception that if you’re not directly facing any threat of bodily harm, then there’s no reason for you to feel distressed,” said Rebecca Thompson, a social psychologist at the University of California Irvine who co-led the study, “but that just hasn’t been borne out in what we have found repeatedly over the past several years.”

The study adds to a general body of work suggesting that the presentation of certain types of violence in media — news, social or otherwise — spreads harm and health consequences through society, much like a virus.

For example, a 2015 study showed a single mass shooting often precedes a temporary spike in additional shootings that can last up to two weeks. And the U.S. has witnessed suicide contagions dating as far back as when news reports labelled the 1962 death of Marilyn Monroe as probably self-inflicted.

Despite these trends, a scientific debate hovers over whether media reports can trigger full-blown post-traumatic stress disorder.

Researchers have known for years that news reports can aggravate PTSD in people who directly experienced a trauma, with the classic examples being for combat soldiers, survivors of sexual assault or those who live in a community where a tragedy occurs.

But this new study and others argue that merely being exposed to a vivid retelling of a trauma is enough to push anyone toward traumatic stress, which is a hotly contested assertion among scientists. The topic is so controversial that the DSM-V — the last iteration of the manual used to diagnose mental disorders — made a point of excluding media exposure as a trigger for trauma.

If media is shown to create mental health distress, should the hosts or purveyors of the content — such as news outlets and social media platforms — be held liable for this harm? Those who argue yes might have a tough sell in the courts.

What the scientists did and found

Two to four weeks after the Boston Marathon bombing, the team conducted a nationwide online survey involving about 4,200 people. It assessed how much exposure participants had to the event, whether through television, radio, photos, videos, social media posts, online news or printed newspaper.

After six months, the researchers followed up with the participants, but this time, also checked for signs of post-traumatic stress using a test known as the Primary Care PTSD Screen.

This test isn’t used to make a final judgment of PTSD, but rather it is the initial step on the way to diagnosis. It does so by asking simple yes or no questions like:

In the past month, have you…

“Doctors use this [screening] to pick up whether or not individuals have symptoms that then might need to be investigated further,” said Roxane Cohen Silver, a UC Irvine professor of psychological science who led the study. “It is a gold standard for measuring acute stress and post-traumatic stress symptoms.”

Her team found that the people who consumed more media surrounding the Boston Marathon bombing were more likely to exhibit symptoms of post-traumatic stress six months later. A year after the bombing, those subjects also reported higher levels of worry about future events.

One might expect these worries to dissuade people from seeking out future media coverage of mass killings, but the study found the opposite.

“Our message is really that regardless of what appears in news or social media, it’s important that consumers be aware of the potential consequences,” Cohen Silver said.

Why does this happen?

These patterns held true even when the team accounted for prior mental health conditions among their subjects, Thompson said: “It’s not as if this cycle is being driven by people who were having trouble prior to these events.”

Rather, the findings argue that this distress cycle, as the study’s authors call it, is a general reaction to portrayals of mass violence in media. The cycle tacks onto a landmark report, conducted in part by Cohen Silver’s lab, that showed that coverage of the Sept. 11 terrorist attacks affected mental and physical health on a national scale.

“We know that mass violence is associated with a greater incidence of a number of mental illnesses, principally post-traumatic stress, depression and also substance use disorders, said Sandro Galea, a physician, epidemiologist and dean at the Boston University School of Public Health. “We’ve known this really since the studies after 9/11, and since then a lot of other studies have borne that out.”

The question is why?

From a neuroscience perspective, “people vary in terms of how they process intense media where there is violence, something very exciting or something like natural disasters,” said Nelly Alia-Klein, a psychiatrist and co-chief of the Neuropsychoimaging of Addiction and Related Conditions research program at the Icahn School of Medicine at Mount Sinai in New York. “The more anxious you are, the more your brain will process this type of information as anxiety-provoking.”

Alia-Klein’s research and that of others point toward these mental tendencies as being dictated by the orbitofrontal cortex, a part of the brain involved with making value judgements. One caveat: Much of this work has relied on fictionalized portrayals of violence, such as in movies.

“There is a great deal of research that suggests that fictional violence has a different impact on people’s physiology than realized violence,” Cohen Silver said. Her lab now plans to look into how human brains specifically process media coverage of mass violence.

Why it matters legally

Coupled with the fact that America is notoriously litigious — and has had a string of notoriously violent events — the latest findings raise questions of whether or not news outlets or social media companies bear any legal responsibility for hosting content that might trigger a harmful cycle in people?

“The short answer is no,” said Susan Benesch, a human rights lawyer and director of the Dangerous Speech Project.

This law explicitly protects tech companies from lawsuits based on content that they allow on their platforms.

In 1996, Congress passed the Communications Decency Act to regulate obscene content on the internet — namely pornographic material — but the Supreme Court later overturned most of its provisions related to indecency. One of the only items that remained intact was “Section 230,” which says that:

No provider or user of an interactive computer service shall be treated as the publisher or speaker of any information provided by another information content provider.

“This law explicitly protects tech companies from lawsuits based on content that they allow on their platforms,” Benesch said, though she points out the U.S. and other countries are still trying to crack down on this content.

In 2017, Germany adopted the Network Enforcement Act, which requires social networks and other media companies to remove content within 24 hours if it is deemed “criminal.” And in the aftermath of the shooting in Christchurch, New Zealand, Australia passed a law that threatens fines and jail time for social media companies and their executives if they fail to rapidly remove violent material from their platforms. 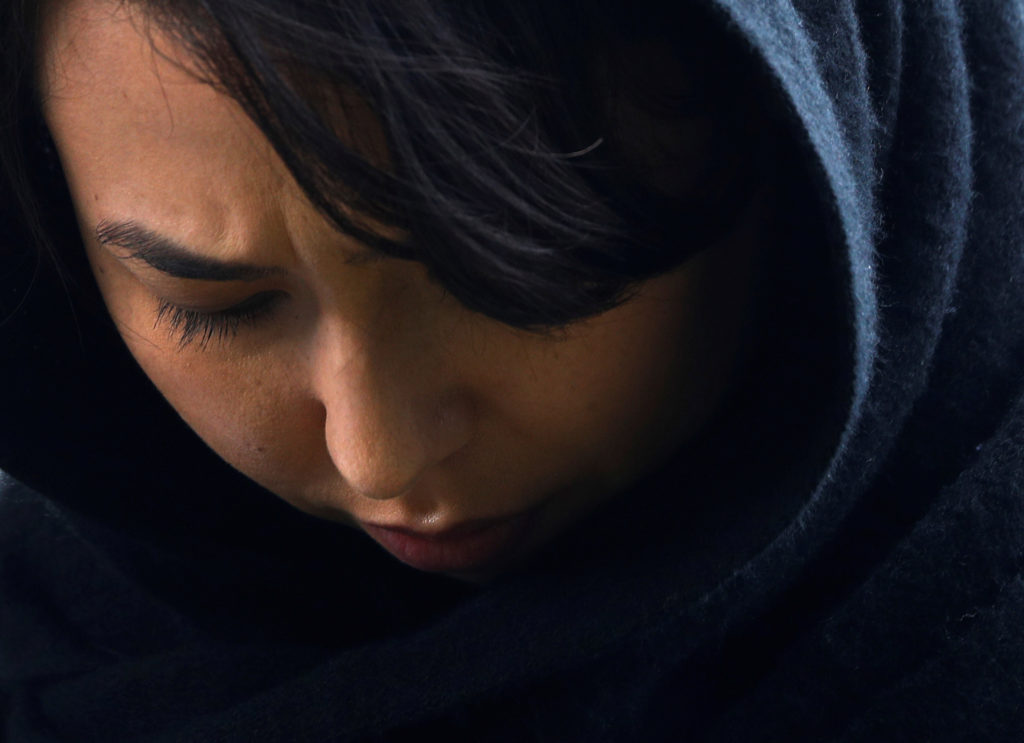 A journalist wearing a headscarf as tribute to the victims of the mosque attacks uses her phone before Friday prayers at Hagley Park outside Al-Noor mosque in Christchurch, New Zealand March 22, 2019. Photo by REUTERS/Edgar Su

Benesch views this legislative strategy as counterproductive because it fails to address the source of the problem. Algorithms will likely always struggle to automatically flag and remove this explicit content before it spreads because, much like humans, these computer programs can’t spot everything.

Indeed, millions of copies of the Christchurch shooting were upload to Facebook within the first 24 hours, and despite automated efforts that instantly removed most of them, hundreds of thousands still got through. Plus, it’s extremely difficult if not impossible to take down any one piece of content from the entire internet once it is posted, Benesch said.

Rather than force media companies to only delete bad content, Benesch said governments should also focus on policy that diminishes the rate at which the new content is posted.

“It’s like trying to respond to food disease outbreaks by simply removing the contaminated food from the market without trying to diminish future food contamination,” said Benesch, who is working with tech companies like Twitter to research ways to diminish abusive content on these platforms. “If you really want to protect people, you’d like to prevent them from eating poisoned food in the first place.”

Left: When people drive by a car accident, they have a natural tendency to rubberneck. People appear to have the same reaction to media coverage of mass violence, even though it breeds symptoms of post-traumatic stress, a new study reports. Photo by REUTERS/Steve Dipaola