Autonomous robots may soon be an ever-present force in our lives, but they are going nowhere fast — or rather, a short distance quickly — without better batteries. You’ve surely seen modern robots scamper through woods or vacuum your floors, but they can only do it for short periods before their energy runs out. Many carry a large battery, which increases a robot’s weight, and in a vicious cycle, requires more power to move.

But a new development in robotic technology that borrows from biology may lead to longer lasting batteries.

The fish “blood” that runs through it serves as both the robot’s power source and controls its movement.

Researchers have engineered a robotic lionfish with synthetic arteries, similar to those found in a human’s circulatory system. The fish “blood” that runs through it serves as both the robot’s power source and controls its movement. The findings, published Wednesday in Nature, may propel the new wave of soft robots, in which inventors seek to improve lifelike automated machines for human connection.

The hard exteriors of most robots, combined with their brute strength, make them potentially dangerous, said Geoffrey Slipher, chief of the Autonomous Systems Division at the U.S. Army Research Laboratory, who wasn’t involved in the study.

“As robots become more prevalent in our lives…we need to figure out a way to make those interactions safer,” Slipher said.

The engineers decided to model their replicate after a lionfish because one of the researchers, James Pikul, has an artistic streak — but also because the marine creature, with its collection of spiky fins, looks cool, said Robert Shepherd, a mechanical engineer at Cornell University who led the project.

They crafted the robot’s exterior using 3-D printed moulds with “skin” made of silicone, a material used in contact lenses and some baking products. This bendable material allows the robot’s fins to mimic the swimming motion seen in nature. The moulds were designed with a web of blood vessels, as well as larger pockets for pumps. 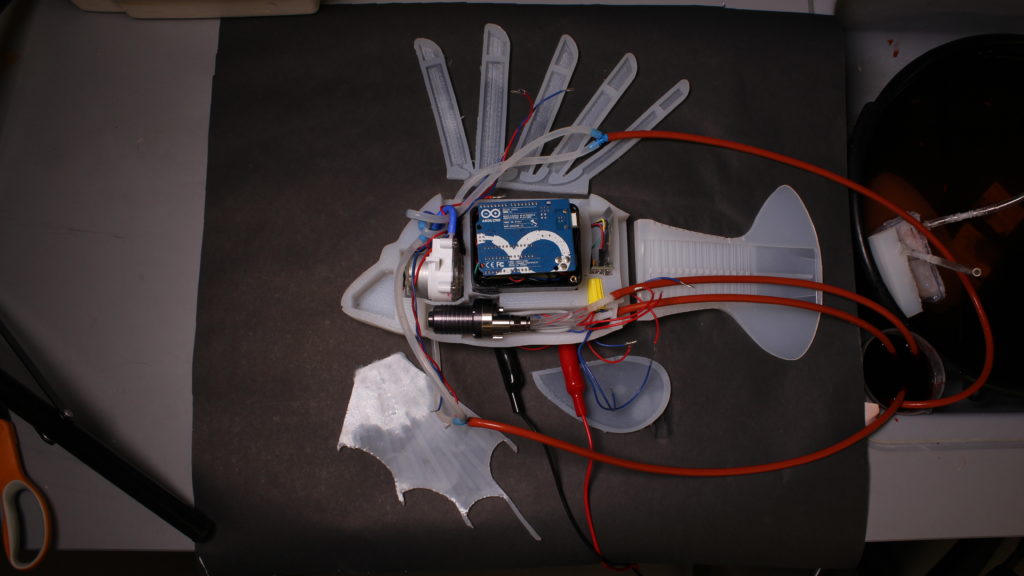 But instead of actual blood, the researchers used an electrolyte cocktail that can conduct electricity throughout the lionfish body and fins, much like a system of wires. When this cocktail flows over electrode stations, embedded in the fins, it generates electricity.

These two components form what’s known as a flow battery. Different than the lithium ion batteries in your phone or computer, flow batteries are generally safer because they don’t typically overheat, but are less energy dense.

That means the flow cell batteries the Cornell researchers used in their lionfish robot didn’t carry more power than lithium ion batteries, Shepherd said. But combining robotic movement and energy storage in one system has other advantages.

Because most robots have separate parts for separate abilities, each part takes up space, which adds weight. So adding more parts and fluid to a small robot could outweigh any energy benefit. But the team found a way to circumvent this issue by combining functions for more efficiency.

Some robots take advantage of a hydraulic system — a network of pressurized fluids that allow for movement, such as with the lionfish’s fins. So rather than take up more room by adding a circulatory system, the new blood vessels share space with the robot’s hydraulics.

“What we’ve done is replace the fluid, which can take up 90 percent of the volume of the robot, with battery,” Shepherd said.

The battery components, part liquid and part solid, provide the electrical energy needed to power the pumps, which, in turn, force the robot blood to flow. Cycling the blood from one side of the tailfin to the other caused the recognizable swimming motion. 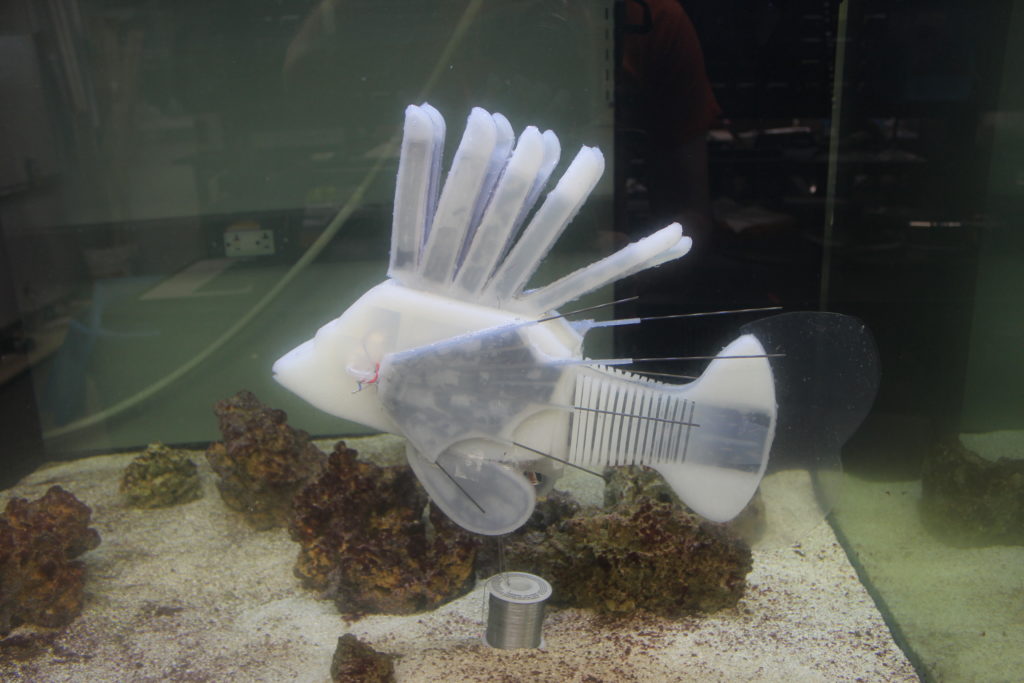 This lionfish robot, powered by fake “blood,” can swim untethered for a calculated 36 hours. Photo by James Pikul

Because flow cell batteries can be linked together, the more surface area a robot has on the interior, the more power can be packed inside. Thanks to the lionfish’s finger-like dorsal fins, the researchers had more surfaces to add battery components, giving the robot more energy capacity. In this case, more energy density means a robot can run for a longer time but be physically smaller — in fact, the team tripled the operating lifetime of the machine.

“This robot demonstrates a significant advancement for multifunctional machines,” Daniela Rus, a roboticist at the Massachusetts Institute of Technology who wasn’t involved in the study, told the PBS NewsHour via email.

The researchers calculated that the lionfish robot could swim, untethered, for 36 hours upstream.

Don’t expect to see an autonomous, life-like lionfish robot swimming around in the wild anytime soon.

“The idea of using the fish was just to demonstrate that this can work,” said Shepherd on the robot’s design.

This synthetic circulatory system has gotten others in the field excited because it kills two birds with one stone. It can power the device, but also controls movement. Such advances in the efficiency of soft robot technology could aid the development of robotic search-and-rescue teams or autonomous robotic surgeons, Slipher said. That may explain why the U.S. Navy funded Shepherd’s project.

“Soft robotics in general matters because it is going to allow robotics to be more prevalent in our lives,” Slipher said. He thinks the technology will allow us to interact more naturally with robots “because we’re not afraid that the system is going to hurt us.”