The science behind the aroma of fall

If you’re lucky enough to live in a place where nature puts on a show in autumn, maybe your nose knows it’s fall as soon as you step outside.

“That’s what fall is all about. Leaves are falling off the trees and the bacteria and fungi that are in the soil are actively digesting [them,]” said Theresa Crimmins, director of the USA National Phenology Network. “And in the process, various [gases] are being released, and that’s a lot of what the smells are.”

Then again, if fall is in full swing and yet your local foliage isn’t popping, the hold up could be connected to the warming climate.

In the fall, scents can be clearer and more prominent due to the shift in atmospheric conditions, Crimmins said. (Phenology is the study of cyclical events in nature, like when leaves change color or animals migrate, as well as how they’re influenced by forces like climate.) The heat and humidity of summer air traps all kinds of smells, she said, creating a “mishmash” for our noses.

READ MORE: What genetic sequencing can reveal about the secret lives of bees

But as the days get cooler and crisper, there are fewer volatile organic compounds in the air, and we’re better able to distinguish the ones that are released by dying and decomposing vegetation, leaving that sweet smell front and center.

Temperature also plays a crucial role in telling trees and other vegetation that it’s fall, Crimmins said, in addition to cues from moisture and day length, which govern how much sunlight they get. Leaves change color in the first place because chlorophyll — the pigment that they use to make food, as well as what makes them green — begins to break down. This process reveals the golds and oranges and reds that were previously invisible to us, Crimmins explained. Trees then reabsorb nutrients from the leaves before they drop to stock up on resources in anticipation of the following spring. 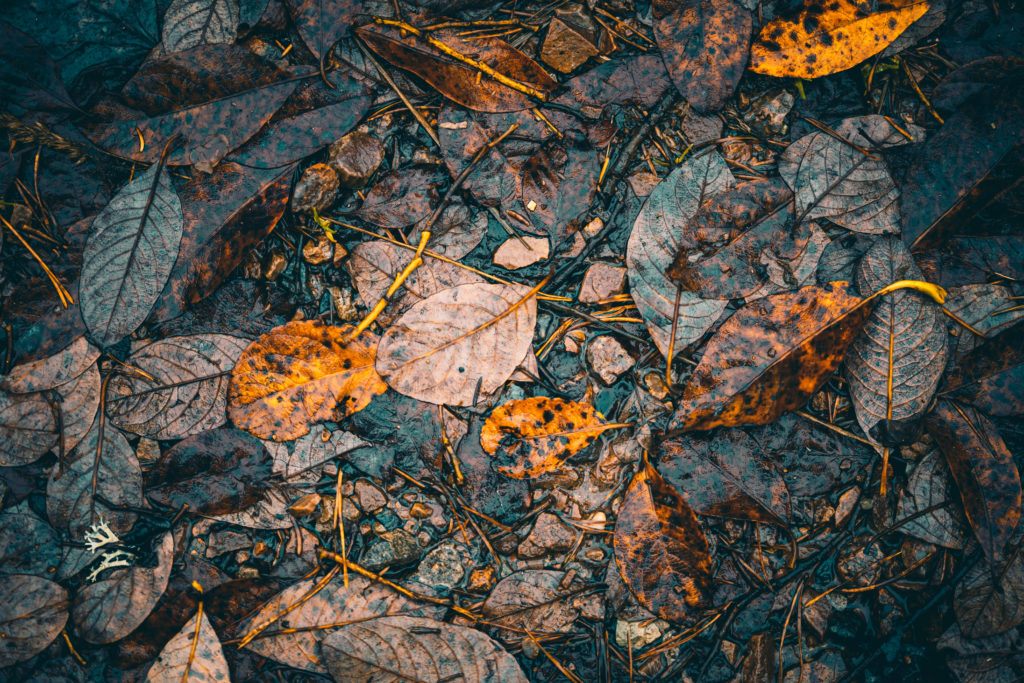 Decomposing leaves that have fallen to the ground release their own earthy smells. Photo by Getty Images

But not everyone is guaranteed a spectacular annual show. Broadly speaking, fall has begun to show up later in the year compared with previous decades, primarily because of warmer average temperatures driven by climate change. And when trees endure drought, perhaps over a long, hot summer, they sometimes ditch their leaves earlier in the year because “the cost of the leaves exceeds the benefit,” said Benjamin Wong Blonder, an ecologist at the University of California Berkeley College of Natural Resources.

Sometimes they don’t bother with their usual fiery displays at all due to the stress of the previous seasons. After a particularly dry year, much of the East Coast isn’t expected to have particularly vibrant foliage.

Many tree species aren’t adapted to the climate extremes we’re already seeing. Given that the effects of climate change are expected to worsen in the years to come, this trend — autumns with unusual timing, leaf drop and no guarantee of a colorful production — will likely persist.

READ MORE: When it comes to sucking up carbon emissions, ‘the ocean has been forgiving.’ That might not last

That’s bad news for the trees because the timing of when leaves first emerge and when they drop is crucial for their long-term health, Blonder added. He also noted that his team’s research suggests that leaf-drop patterns may be influenced by climate stresses that happened even a few years prior.

“Imagine that you’re this plant and once you start growing, you’re stuck there. And you might be stuck there for hundreds or thousands of years, depending on the species. And every year, the climate might be a little bit different,” Blonder said. “It might be hot and dry one year, or really wet another. So being able to cope with all that variation without being able to move anywhere is a real challenge.”

To get a sense of when various events happen seasonally, including when leaves change color, Crimmins’ organization invites nature-enthusiasts-turned-citizen-scientists to report what they’re observing. They can use that data to better understand the phenomenon of phenology, while for you, it’s just another way to use your senses for all the fall feelings.