The ‘skin of our planet’ is in danger. Here’s how scientists are trying to save it

Biological soil crusts, which some researchers describe as “the living skin of the Earth,” are a diverse community of organisms — microbes, fungi, plants and lichens — that plays a crucial role in managing entire ecosystems. And they’re in trouble.

From deserts to polar regions, dryland ecosystems support about one-third of the human population and make up about 40 percent of the Earth’s land surface — and 30 percent of that land is covered by biocrusts. They may not look like much, but if you zoom in close, you’ll start to see a complex web of life — one vital to the health of its environment.

“I encourage [people] to get on their hands and knees and really check them out,” said Sasha Reed, a biogeochemist with the United States Geological Survey.

Though resistant to drought, biocrusts are still “quite sensitive to climate change.”

They help plants get necessary nutrients like nitrogen and they stabilize loose soil, protecting against erosion. That means the loss of this top layer — often driven by human activity, as well as by climate change — has far-reaching consequences.

Temperatures in dryland regions have already increased and droughts have become more severe. Climate scientists project temperatures will continue to warm in drylands at faster rates than in other ecosystems, and drought frequency and severity will increase more quickly.

The effects can already be seen in the Southwest, with Lake Mead at record-low levels and the entire region in a megadrought more severe than any seen in the past 1,000 years.

A 2018 study estimated that 25 to 40 percent of Earth’s existing biocrust could disappear within 65 years.

“[Biocrusts] are only active under certain conditions,” said Anita Antoninka, a soil ecologist at Northern Arizona University’s Center for Adaptable Western Landscapes. “[They] grow slowly and once lost, [are] lost forever.” 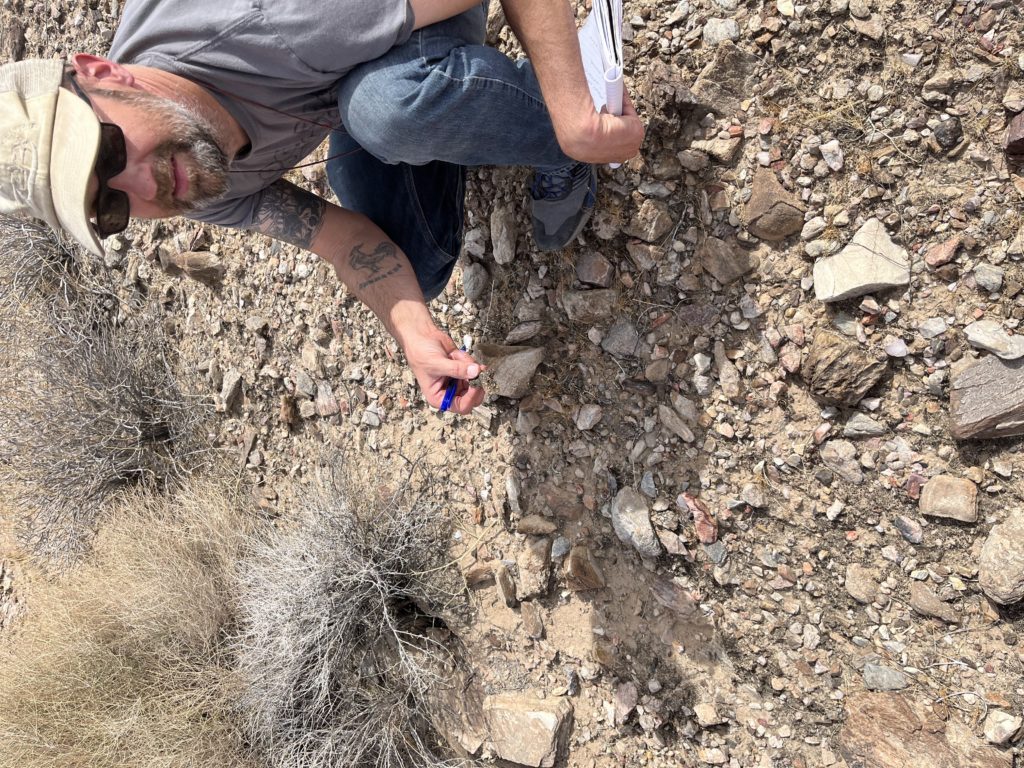 Matt Bowker, a soil ecologist at Northern Arizona University, is developing a global research network that would bring together scientists from all over the world to collect their research into large datasets to better understand the crusts on a global level. Photo courtesy Anita Antoninka

Young biocrusts are almost indistinguishable from their surroundings, but mature crusts may appear dark and knobby or vibrantly colorful. Some can be incredibly old, living for up to thousands of years.

There are different kinds of biocrust, generally classified by the crust shape and the mix of organisms forming relationships within the community. Lichens often form a structure for the crusts and are classified by their shape, such as smooth, rugose, pinnacled or rolling. The rougher types of crust, those with more lichen elements, slow erosion while helping to retain water and nutrients for other, larger plants to grow.

Biocrust communities — like “tiny coral reefs in the desert,” according to soil ecologist Matt Bowker — are also very fragile. They can be destroyed by livestock, heavy machinery, or even just people walking on them. This has led to “don’t bust the crust” campaigns all over the American Southwest, often led by the National Park Service.

Though resistant to drought, biocrusts are still “quite sensitive to climate change,” according to Reed. Experiments have revealed that changes in temperature of about 4 degrees Celsius can seriously hinder their rate of growth and recovery.

Too much water can also result in the death of biocrust communities. “Biocrusts are special in that they can completely dry out,” said Jayne Belnap, a research ecologist for the U.S. Geological Survey. It takes a lot of photosynthetic energy for these organisms to rehydrate, and more frequent rain events with increased temperature will cause energy loss through the repetitive process of drying out and rehydrating. The more often they need to perform this process, the more likely they are to lose energy.

How biocrusts benefit the environment

Biocrusts protect the land from erosion, but if the crust is lost, more dust is whipped into the atmosphere.

Dust has been the third-deadliest weather hazard in Arizona over the last 50 years; as the biocrust degrades and exposes more soil to erosion, the problem will only be exacerbated. Antoninka and Reed agree that cases of valley fever, a fungal disease often transported in dust, could rise as the biocrust disappears.

Biocrust is also an important factor in the water cycle, especially along the Colorado River. Without the crust to hold it in place, dust gets picked up by the wind and deposited on snow, causing the snowpack to absorb more sunlight and melt too quickly. As a result, mountain plants become active earlier in the season, absorbing the water before it can reach rivers. This makes the seasonal cycles of rivers more erratic, causing increased strain on water supply for communities and agriculture.

READ MORE: This researcher seeks farming solutions that are easier on the land and more profitable

All of this is a “result of busting the crust,” according to Belnap.

Reed also suspects that drylands play an underrated role in the global carbon cycle. Carbon sequestration is a part of the cycle that pulls some of that greenhouse gas out of the atmosphere and stores or sequesters it in places that can hold carbon, such as oceans, large trees in the rainforest or even in cacti and grasses. Despite all the ecosystems that can absorb carbon, about 45 percent of the carbon dioxide humans produce remains in the atmosphere.

Forests are major centers for carbon sequestration, where large trees are able to absorb and use carbon as they grow. But it is estimated that 30 percent of the world’s carbon resides in and below dryland ecosystems, held in the biocrust, cacti and other dryland flora.

Efforts are underway to restore biocrust in places where it has been lost. One of the largest hurdles will be tracking large swaths of biological soil crust at once in order to measure where and how much of it is disappearing. Scientists are looking to NASA for help. The goal of working with NASA is to gain access to different technologies, such as satellites, planes or even drones, to better map and measure changes in the overall surface area of biocrusts around the world.

“We want to start to build a network,” Reed said.

Separately, Bowker, who works with Antoninka at Northern Arizona University, is developing a global research network called CrustNET. This would involve scientists from all over the world collaborating and collating their research into large datasets to better understand the crusts on a global level.

READ MORE: Our past and future is written in Earth’s landscape. Here’s how one geomorphologist is reading it

One of the main focus of biocrust research is the restoration of landscapes that have already lost most of their native biocrust populations. Ecologists are experimenting with techniques to transport or graft healthy biocrust over damaged landscapes in much the same way a doctor grafts healthy skin to wounds on a body.

“We are borrowing a lot from plant restoration,” Antoninka said about the grafting techniques. 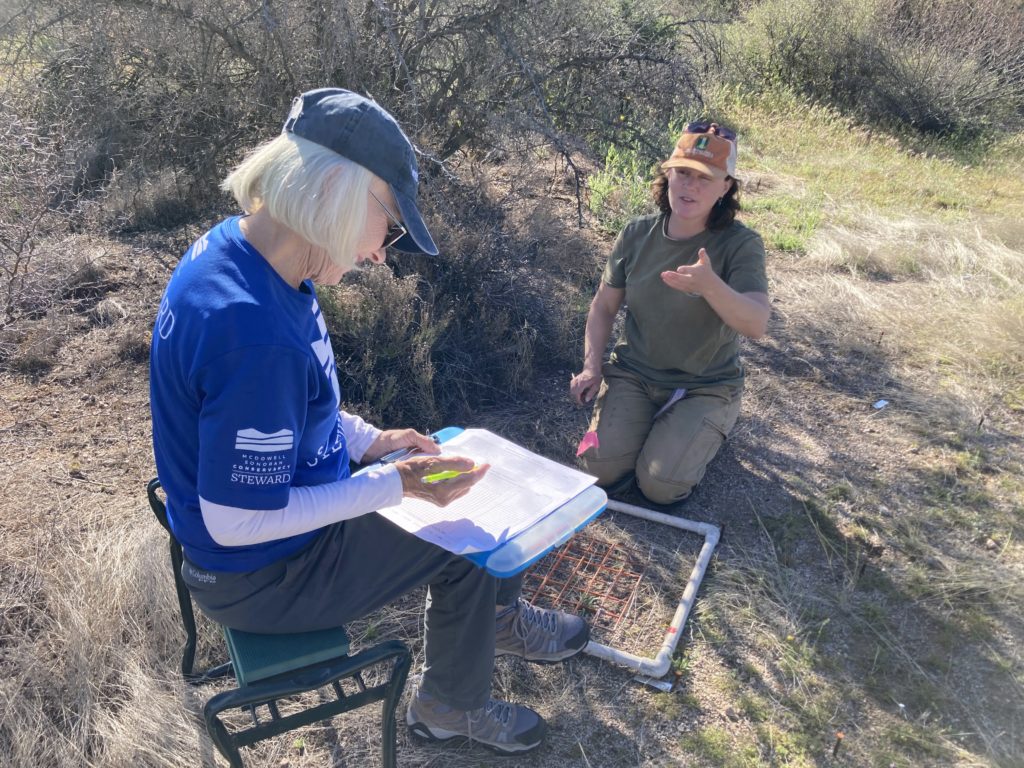 As biocrust is lost in the wilderness, scientists have been able to replicate and grow these biological communities in laboratories. Under ideal conditions, biocrust can grow quite quickly.

“We were able to bulk it up and grow it really quickly,” Reed said, “[but] we made life too easy.” Once the lab-grown crust was introduced to outside conditions, it was unable to survive.

READ MORE: How you can contribute to scientific discoveries from your couch

Reed and Antoninka are experimenting with ways to make the crust more resilient by hardening it to the conditions it would experience in the wild. They are also working to soften potential areas for transplant with a regular watering system until the crust becomes established.

Just as our own skin helps regulate our bodies, the biocrust plays a key role in our world. With rising global temperatures and increasing drought, the Earth’s skin is in more trouble than ever before, but scientists are working to salvage what they can, and urging the public to appreciate what remains.

Left: Dryland ecosystems make up about 40 percent of the Earth’s land surface and support about one-third of the human population. Photo courtesy Anita Antoninka

Christopher Thomas is a news assistant for the PBS NewsHour.