Analysis: The devastating stigma of fistula and the surgery that can help

One big challenge of being a foreign correspondent is to make the foreign less foreign, especially on issues that might seem esoteric or irrelevant to an American audience. The challenge was all the greater when we embarked on our report about obstetric fistula, a topic not often seen on television, especially during the dinner hour.

Fistula is a tear in the wall between the vagina and bladder (and sometimes the rectum), caused in most cases by prolonged obstructed labor, leaving the woman incontinent. Women are at especially high risk for fistula in some countries where early marriage is prevalent, their bodies not sufficiently mature for pregnancy.

Women are at especially high risk for fistula in some countries where early marriage is prevalent, their bodies not sufficiently mature for pregnancy.

It was once a common occurrence. The site of New York City’s Waldorf Astoria hotel began life in the 1867 as a fistula hospital. Prenatal care and Caesarian sections have made fistulas a rare occurrence in developed countries or most settings where births are aided by a skilled attendant. Yet it continues to be an unfortunate reality for many of the world’s poorest women.

“I lost all my friends,” says Sarah Omega, 41, featured in our Dec. 27 broadcast report from Kenya. “When you just arrive (in a place) where people are seated, some of them hold their noses because of the bad odor and they start leaving that place one by one.”

“I couldn’t go to church,” she adds, a particularly painful consequence for a woman of deep faith, faith that ironically informed her medical predicament in so many different ways.

Omega became pregnant as a result of rape by her pastor when she was 19, she says, an assault she kept secret because her abuser threatened dire consequences if she ever reported it. She fled to live with a relative in a distant city.

“I was so scared I didn’t want to secure an abortion because of my faith,” she says. “So I kept the pregnancy.”

She experienced an excruciating 38 hours of labor, which left her with a stillborn baby boy and a fistula she endured through 12 years of anguished visits to providers who said they were unable to help her, two suicide attempts and eventually a psychiatric commitment to a hospital. Only there, when she met Dr. Hillary Mabeya, was she made aware of an option that’s been readily available for a long time in places where people can afford it; like New York in 1867: surgery.

Obstetrician Mabeya is one of a handful of surgeons performing fistula repairs in Kenya. Quiet and understated, his passion is displayed most vividly in a schedule of some 45 procedures every week, training a number of younger surgeons. 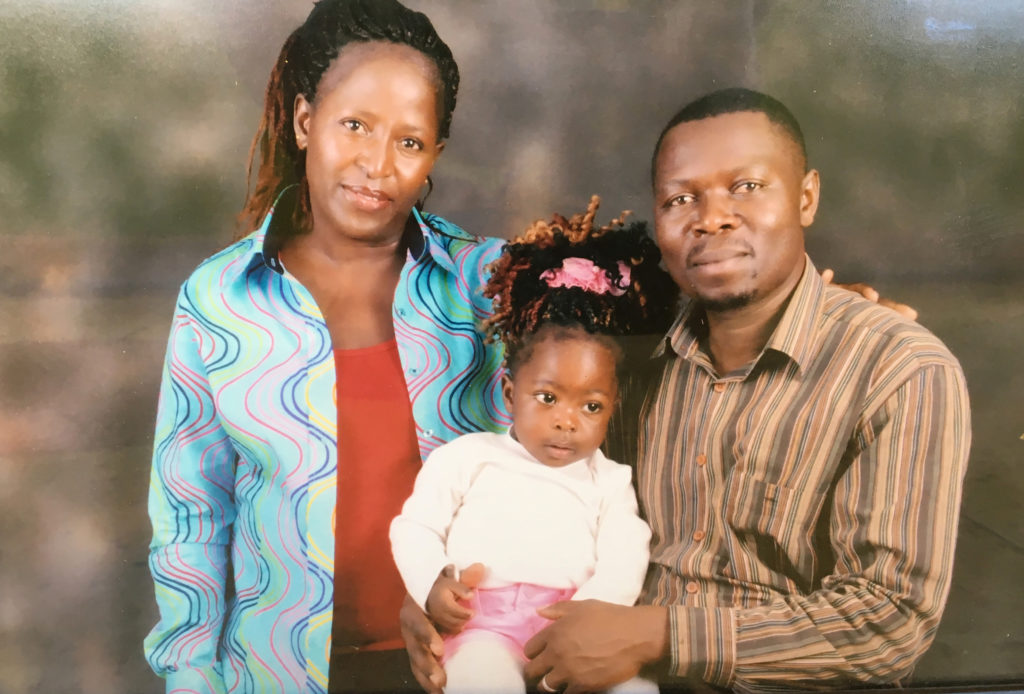 Photograph of Sarah Omega, her husband Kennedy Otieno and their daughter, Jade

Now Sarah Omega is an emissary for the cause — trying to bring women to surgery at the new hospital built for Mabeya in the western Kenyan city of Eldoret. Care is provided at no charge, all supported by the California-based charity, Fistula Foundation. Their campaign, with other local groups, includes public rallies to explain the medical basis for the “curse” visited upon so many women and attack the social stigma they endure in painful solitude.

As with so many public health paradoxes in low-income countries, fistula is easily preventable, fixed in most cases for just $350 per operation and yet widely inevitable. Women, particularly in rural areas, lack access to skilled birthing care. Many, as in Sarah Omega’s case, are too poor to afford transportation to a health care facility. In some countries, like Ethiopia, a tradition of early marriage adds further complication and numbers. Young brides, their bodies not fully developed, are at high risk for complications during pregnancy and labor.

The Fistula Foundation hopes to expand its efforts across several African countries in the years ahead, including Ethiopia, home of the pioneering Hamlin Fistula hospital, where I had the opportunity to visit in 2011.

For her part, Sarah Omega says she offers the hope of healing and a better life to the women she counsels, including her own post-op happily-ever-after.

Unlike many fistula sufferers, who are abandoned by their partners or husbands, she found a committed partner after her surgery and was able to conceive a child. Their daughter, Jade, now 3, was delivered by C-section by Mabeya. It was a vindication of her enduring faith, she says:

“I remember at some point saying ‘God, if you will give me a baby that baby will erase the pain I have gone through in this life.’”

Left: Special correspondent Fred de Sam Lazaro reports from Kenya on efforts to offer treatment for fistula and reintegrate women back into communities.