KYIV, Ukraine (AP) — Russia attacked the Ukrainian president’s hometown and other targets Sunday with suicide drones, and Ukraine took back full control of a strategic eastern city in a counteroffensive that has reshaped the war.

Russia’s loss of the eastern city of Lyman, which it had been using as a transport and logistics hub, is a new blow to the Kremlin as it seeks to escalate the war by illegally annexing four regions of Ukraine and heightening threats to use nuclear force.

Ukrainian President Volodymyr Zelenskyy announced Sunday that his forces now control Lyman: “As of 12:30 p.m. (0930 GMT) Lyman is cleared fully. Thank you to our militaries, our warriors,” he said in a video address.

Russia’s military didn’t comment Sunday on Lyman, after announcing Saturday that it was withdrawing its forces there to more favorable positions.

The British military described the recapture of Lyman as a “significant political setback” for Moscow, and Ukraine appeared to swiftly capitalize on its gains. 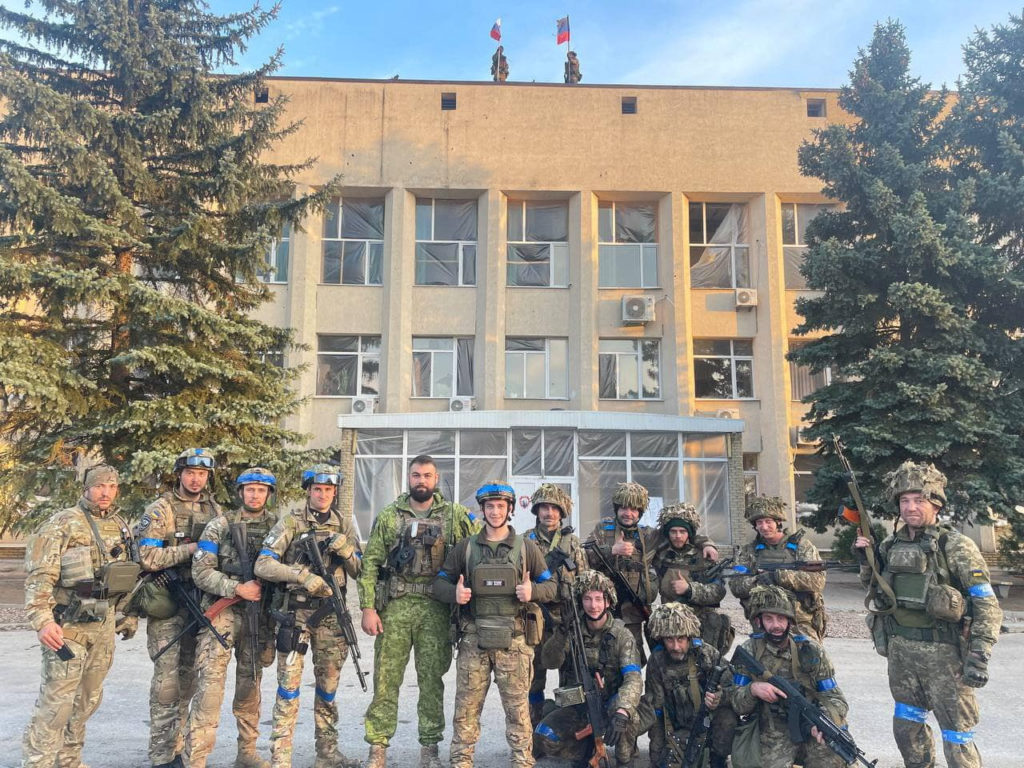 Ukrainian troops pose for a photo in Lyman, Ukraine in this picture released in social media Oct. 1, 2022. Courtesy of Oleksiy Biloshytskyi/via Reuters

Hours after Zelenskyy’s announcement, Ukrainian media shared an image of Ukrainian troops carrying the country’s yellow-and-blue flag in front of a statue marking the village of Torske, 15 kilometers (9 miles) east of Lyman and within sight of the Russian-held Luhansk region.

Shortly later, a video posted online showed one Ukrainian soldier saying that Kyiv’s forces had begun to target the city of Kreminna, just across the border in Luhansk. Outgoing artillery could be heard in the background. Russian military correspondents also acknowledged Ukrainian attacks targeting Kreminna.

In another online photo, an Ukrainian soldier stood before giant watermelon landmark just south of the village of Novovorontsovka on the banks of the Dnieper River, along the Russian-controlled province of Kherson’s northern edge. A Ukrainian flag flew above the statue as several apparently deactivated landmines lay beside it.

While Ukrainian forces did not immediately acknowledge a breakthrough, writers close to the Russian military have described a new offensive by Kyiv in the Kherson region.

In southern Ukraine, Zelenskyy’s hometown of Krivyi Rih came under Russian attack by a suicide drone that destroyed two stories of a school early Sunday, the regional governor said. The Ukrainian air force said Sunday it shot down five Iranian-made drones overnight, while two others made it through air defenses.

A car carrying four men seeking to forage for mushrooms in Ukraine’s Chernihiv region struck a mine, killing all those inside, authorities said Sunday.

The reports of military activity couldn’t be immediately verified.

Ukrainian forces have retaken swaths of territory, notably in the northeast around Kharkiv, in a counteroffensive in recent weeks that has embarrassed the Kremlin and prompted rare domestic criticism of Putin’s war.

Lyman, which Ukraine recaptured by encircling Russian troops, is in the Donetsk region near the border with Luhansk, two of the four regions that Russia illegally annexed Friday after forcing what was left of the population to vote in referendums at gunpoint.

In his nightly address, Zelenskyy said: “Over the past week, there have been more Ukrainian flags in the Donbas. In a week there will be even more.”

In a daily intelligence briefing Sunday, the British Defense Ministry called Lyman crucial because it has “a key road crossing over the Siversky Donets River, behind which Russia has been attempting to consolidate its defenses.”

The Russian retreat from northeast Ukraine in recent weeks has revealed evidence of widespread, routine torture of both civilians and soldiers, notably in the strategic city of Izium, an Associated Press investigation has found.

AP journalists located 10 torture sites in the town, including a deep pit in a residential compound, a clammy underground jail that reeked of urine, a medical clinic and a kindergarten.

Recent developments have raised fears of all-out conflict between Russia and the West.

Putin frames the recent Ukrainian gains — along with NATO’s post-Soviet expansion — as a U.S.-orchestrated effort to destroy Russia, and last week he heightened threats of nuclear force in some of his toughest, most anti-Western rhetoric to date.

Nine central and eastern European NATO members fearful that Russia’s aggression could eventually target them, too, issued a letter of support Sunday for Ukraine.

The leaders of Czechia, Estonia, Latvia, Lithuania, North Macedonia, Montenegro, Poland, Romania and Slovakia issued a joint statement Sunday backing a path to NATO membership for Ukraine, and calling on all 30 members of the U.S.-led security bloc to ramp up military aid for Kyiv.

Germany’s defense minister on Sunday announced the delivery of 16 wheeled armored howitzers produced in Slovakia to Ukraine next year. The weapons will be financed jointly with Denmark, Norway and Germany,

Russia moved ahead Sunday with steps meant to make its land grab look like a legal process aimed at helping people allegedly persecuted by Kyiv, with rubber-stamp approval by the Constitutional Court and draft laws being pushed through the Kremlin-friendly parliament.

Outside Russia, the Kremlin’s actions have been widely denounced as violating international law, with multiple EU countries summoning Russian ambassadors since Putin on Friday signed annexation treaties with Moscow-backed officials in southern and eastern Ukraine.

Meanwhile, international concerns are mounting about the fate of Europe’s largest nuclear plant after Russian forces detained its director for alleged questioning.

The International Atomic Energy Agency announced Sunday that its director-general, Rafael Grossi would visit Kyiv and Moscow in the coming days to discuss the situation around the Zaporizhzhia nuclear power plant. Grossi is continuing to push for “a nuclear safety and security zone” around the site.

The Zaporizhzhia plant is in one of the four regions that Moscow illegally annexed on Friday, and repeatedly has been caught in the crossfire of the war. Ukrainian technicians have continued running the power station after Russian troops seized it but its last reactor was shut down in September as a precautionary measure.

Pope Francis on Sunday decried Russia’s nuclear threats and appealed to Putin to stop “this spiral of violence and death.”

Left: A service member of Ukraine's National Guard walks on a bridge over the Siverskyi Donets river destroyed during Russia's attack on Ukraine, in the town of Sviatohirsk, Donetsk region, Ukraine, Oct. 1, 2022. Photo by Vladyslav Musiienko/Reuters