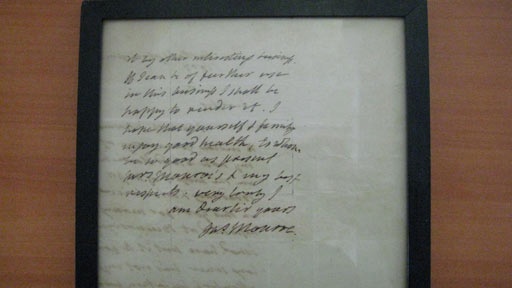 A Florida woman recently inherited a family mystery. In her late mother's belongings, she stumbled on a framed letter allegedly penned by future President James Monroe in 1807.

Our contributor has recognized a family name “Manwaring” scrawled near the date, and believes the letter references a monetary debt the financially unstable U.S. Government owed the Manwaring family.

The document leads to a tale of terror on the high seas, when American merchant ships were stalked by Britain, their cargo pillaged and their crews forced into the British Navy to fight against France.

Young America was desperate to avoid war, and James Monroe, then Minister to Britain, attempted to mediate with his pen.