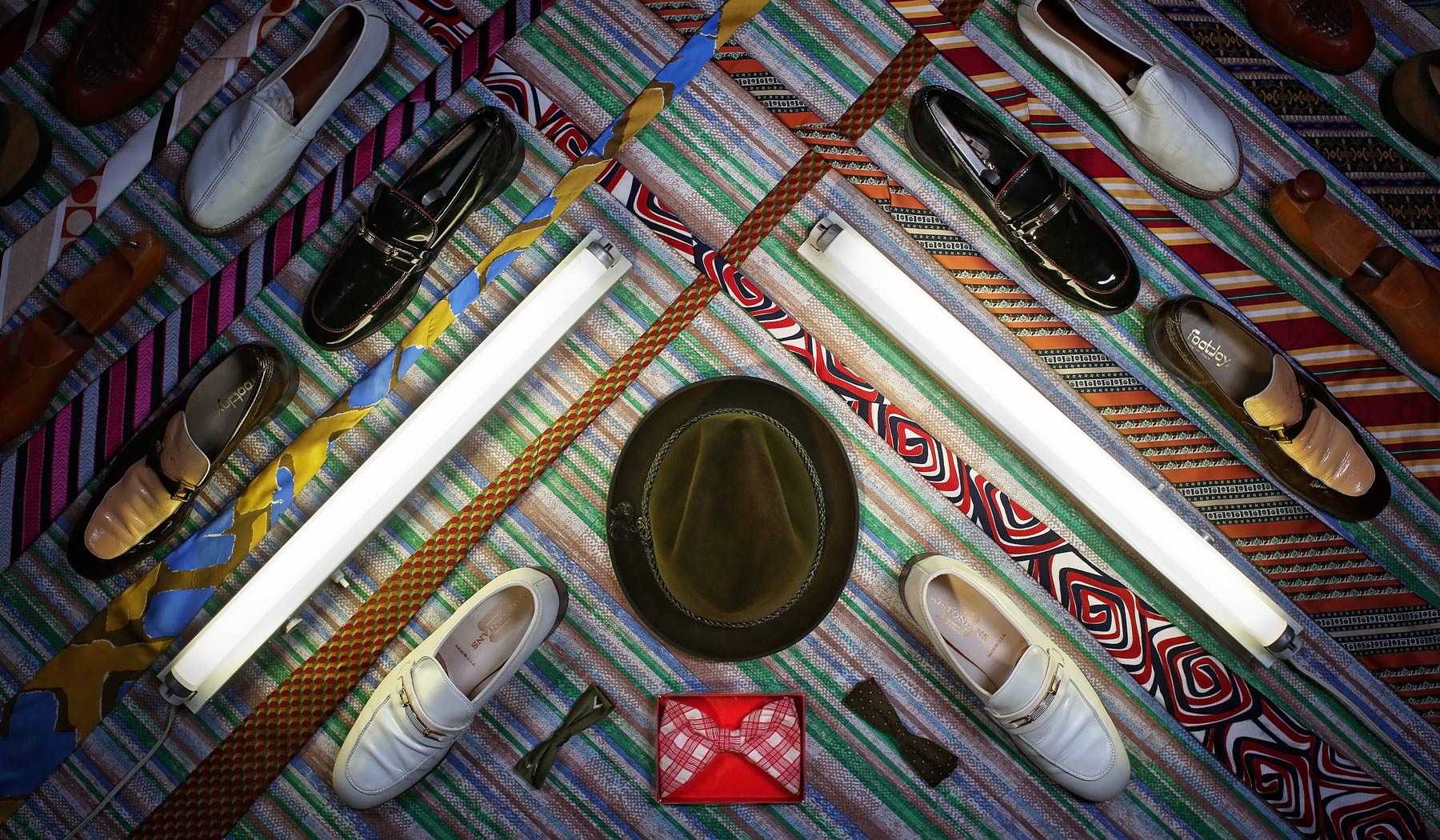 Immediately after the film, you may want to give people a few quiet moments to reflect on what they have seen. Or pose a general question (examples below) and give people some time to jot down or think about their answers before opening the discussion:

If you were going to tell a friend about this film, what would you say?

Describe a moment or scene in the film that you found particularly thought-provoking or moving. What was it about that scene that was especially compelling for you?

Did anything in the film surprise you? Was anything familiar?

If you could ask the filmmakers a single question, what would you want to know?

In home movie footage, Annette regrets her grandchildren’s dirty socks: “You've cleaned up my floor with your socks and now you're going home with dirty socks. Well, you'll put them in the washing machine. So that's the story.” Why do we tell stories? How do they help us make sense of the mundane events of daily life? How does the film transform the mundane into a story?

What do you think Annette’s and Herman’s artifacts said about them? What would your loved ones learn about you from the “stuff” you have now?

Think for a moment about the artifacts you are creating in your everyday life. How has the shift to digital technology changed the artifacts that people leave behind? What is gained and lost in that shift?

Jonathan experiences a vision that takes him back to being an art student in Rome: “When I'm in Rome the past feels alive. Maybe that's why grandma brought me back.” What sorts of places make the past come alive for you? Are they like Rome, interweaving ancient ruins with modern life, or perhaps rich with traditions of indigenous people? Are there places that erase your connection to the past? What are those places like?

Elan says, “I got the idea to interview [my grandma] when I got my first camera in film school. It was a way to ask her questions I wouldn't normally ask.” How does the camera make it possible to ask questions that would otherwise be off limits? What questions would you ask the elders in your family? What about those particular questions interests you?

Elan observes, “In every archaeological dig some artifacts are more valuable than others.” How does our current culture shape what we see as valuable? How have judgements about what to exhibit and what to hide changed over time? Can you recall a time when it would have been taboo to reveal that your family argued, that there was a divorce, or an intermarriage, or that there might be a family member with a mental illness? What changed?

Jonathan and Elan struggle with differentiating between junk and meaningful objects, recognizing that once they discard something, it’s gone forever. Elan asks, “how do we know what we should keep or what we should throw away?” How would you answer her? What criteria would you use (or have you used) to sort through personal artifacts?

Textile conservator Nicole Bloomfield describes her autopsy-like examination of Annette’s dress: “Clothing is the fastest path back in time to understanding people from before. When I'm touching it in particular I really feel transported to another space and another moment. Lace degraded, splitting, tearing especially at top…It's very intimate. There's all these little tiny things that become apparent to me about the original owner.” What was it like to watch this intimate process? How is handling an artifact different than looking at picture of it or viewing it in a museum?

Jonathan describes how archaeologists create catalogues to bring order to artifacts they find: “The idea is that the groupings, the patterns reveal some underlying connection, some underlying order.” Look at the catalogues from the film as art – what does each one say to you? What sorts of categories would you use to sort the objects in your home?

The filmmakers seek professional guidance by visiting the Rockefeller estate. What did the two homes have in common? How were the Rockefeller artifacts different from or similar to the things left behind by the Ontells?

Robert Clark explains that it’s just as important to document the history of his grandparents as it is the story of the Rockefellers because not doing so would be “to make a qualitative judgment that they somehow didn't have value and so we're not going to save a record of their existence tells a kind of story that we don't want to tell about this nation (which is that it's only great and wealthy people who have value).” Why might it be important to save the stories of “regular” folks as well as the “great and wealthy”? As a society, have the investments we’ve made in teaching and preserving our history reflected the belief that everyone has value? Where do you see investments in preserving and passing along the stories of ordinary people?

In their search to uncover their grandmother in the artifacts she left behind, what do you think Elan and Jonathan learned about themselves?

According to Elan, being Jewish was important to Annette. Which artifacts speak to Annette’s Jewish identity? What do they tell you about how Annette enacted that identity?

Author and physicist Alan Lightman says that even though the structure’s footprint is small, “A house is a universe. It's an entire world.” Does it change the way you think about your home to think of it as a “universe” or “world”?

Annette comments on staying with Herman despite their fights: “If you love a guy, if a guy is good to you and if he's smart and he's decent and he's got good values and he's sincere and he's not a womanizer, you got it made.” How does this attitude reflect her generation’s experience of womanhood and marriage?

What was your takeaway from the choreographed show of grandma’s dresses, with the house as backdrop? How does it connect to Annette’s statement that, “Fashion was my cup of tea. I loved it. It takes us into an imaginary world”?

Annette summarizes her life: “My life has been a success. I achieved having a good credit line. I pay my bills on time. I have a good reputation.” How does this compare with the way that you would describe “success”?

In one interview, Elan asks her grandmother about vanity and sex. What lessons about aging and womanhood do Annette’s answers provide?

Annette talks about her peers all being gone: “Somebody has to be the last one.” What is both special and difficult about being the “last one” of a family or social group?

Trying on dresses, Annette laments that she feels like a “clump of flesh” and doesn’t have the energy of her youth, but she is accepting: “Even a tree, an oak tree, when it grows tall and big and even the wind can knock it down…So that's what happens…So where does it put me? It puts me into this seat but I'm alive.” Is this view typical of the older women you know, or is Annette’s view unusual? What messages does our society (or the fashion industry that inspired Annette) convey to women about their aging bodies?

How did the scene with Annette trying on the dresses she had made make you feel? Why do you think Elan and Marilyn wanted her to do this?

How does the “excavation” of their grandmother’s house function as part of Jonathan’s and Elan’s grieving process?

After her death, Jonathan looks at Annette’s house with new eyes: “Grandma's house is transformed. Her bedroom isn't for sleeping. Her kitchen isn't for eating and her objects are no longer for use. They're for telling stories. Grandma's house isn't a home anymore. It's a ruin.” How does death of a loved one change our relationship to houses and objects?

Marilyn is devastated that she wasn’t with her mother the moment that Annette died. What have your cultural or family traditions taught about accompanying loved ones as they pass from life to death?

The funeral director offers an explanation for the apparitions in Annette’s house: “After the loved one is buried their soul continues to the place on earth that was most familiar and comforting and that's its home. We believe that the soul remains near the home for a period of eleven months. Right now you have those eleven months to make your grandmother tangible again because your grandmother is still here.” Elan comments, “I don't believe in spirits but somehow what she says makes sense.” Does it make sense to you?

Jonathan says, “Sometimes grandma feels really present. At the beach I see her old legs and it seems like she's everywhere. Other times I can't feel her at all.” What customs or rituals does your family observe in order to feel the presence of deceased loved ones or honor them? How do they compare to the rituals that Elan and Jonathan create? Why do you think so many human cultures have developed elaborate rituals related to death and remembering?

If you could require one person (or one group) to view this film, who would it be? What do you hope their main takeaway would be?