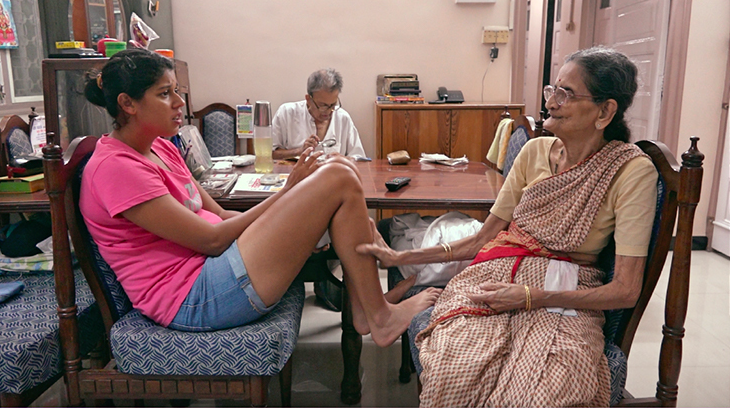 Three generations of the Phadke family live together in their home in Mumbai. When the youngest daughter turns the camera toward her family, the personal becomes political as power structures within the family become visible—and eventually unravel. Cruel and comic in equal measure, the film examines the vagaries of affection across generations, tied together by something stranger than love.

Gidia, Sujatha. Ants Among Elephants: An Untouchable Family and the Making of Modern India. New York, New York: Farrar, Straus, and Giroux, 2018.
Like one in six people in India, Sujatha Gidia was born an untouchable. In this biography, Gidia explores how her family history was at once extraordinary and typical. A moving portrait of love, hardship, and struggle, Ants Among Elephants is a personal history of modern India told from the bottom up.

Mehta, Suketu. Maximum City: Bombay Lost and Found. New York, New York: Penguin Books, 2004.
Suketu Mehta gives an insider’s view of Mumbai approaching the city from unexpected angles, and different points of view. As each individual story unfolds, Mehta also recounts his own efforts to make a home in Mumbai, after more than 20 years abroad, Candid, impassioned, funny, and heartrending, Maximum City is a revelation of an ancient and ever-changing world.

Patel, Sujata. Bombay and Mumbai: The City in Transition. Uttar Pradesh, India: Oxford India Paperbacks, 2005.
This volume looks at contemporary Mumbai. The papers in this volume explore and explain what Bombay has become in its shape and patterns of living at the beginning of the 21st century. It looks at the implications of change in Mumbai and the ways in which it has affected its people.

Phadke, Shilpa and Sameera Khan Why Loiter?: Women and Risk on Mumbai Streets. New York, New York: Penguin Books, 2011.
Why Loiter? maps the exclusions and negotiations that women from different classes and communities encounter in the nation’s urban public spaces. Based on more than three years of research, Phadke, Khan, and Ranade argue that through women’s access to urban spaces has increased they still do not have equal claim to public space in the city. Drawing on feminist theory, they argue that only by celebrating loitering as an radical act for most Indian women can a truly equal global city be created.

Rohatgi, Pauline Pheroza Gorrej, and Rahul Mehrotra. Bombay to Mumbai: Changing Perspectives. Mumbai, India. The Marg Foundation, 2008.
The history is told here of how, within three centuries, seven west-coast islands evolved into the Bombay peninsula, then into a flourishing center for trade. It ultimately became the cosmopolitan, high rise metropolis of Mumbai.