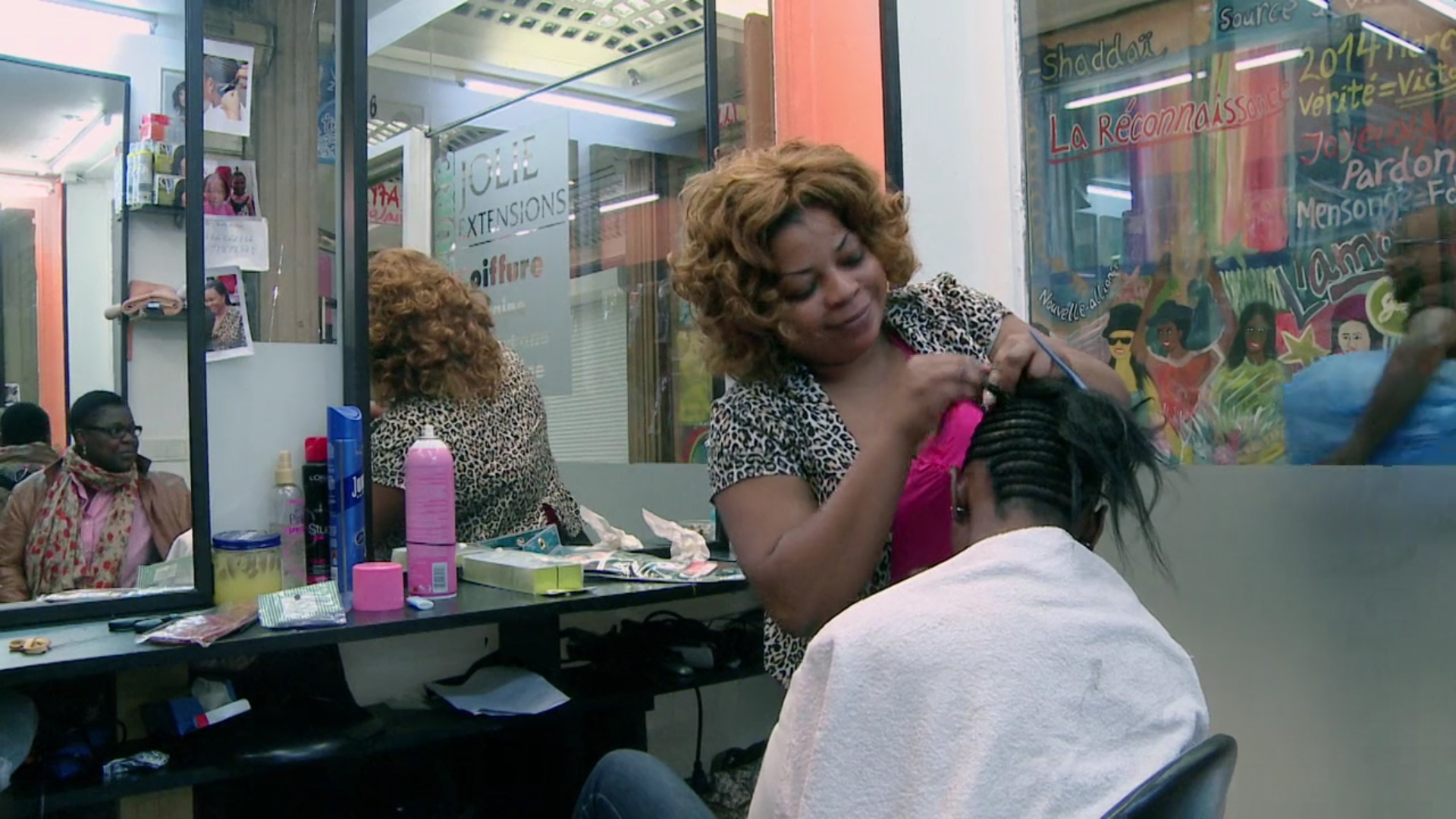 Adichie, Chimamanda Ngozi. We Should All Be Feminists. Anchor, 2015.
In this personal, eloquently-argued essay—adapted from the much-admired TEDx talk (https://www.ted.com/talks/chimamanda_ngozi_adichie_we_should_all_be_feminists?language=en) of the same name—Chimamanda Ngozi Adichie offers readers a unique definition of feminism for the twenty-first century, one rooted in inclusion and awareness. Drawing extensively on her own experiences and her deep understanding of the often-masked realities of sexual politics, here is one remarkable author’s exploration of what it means to be a woman now—and an of-the-moment rallying cry for why we should all be feminists.

Gill, Tiffany M. Beauty Shop Politics: African American Women's Activism in the Beauty Industry. University of Illinois Press 2010.
A bold reassessment of black beauty salons as vital sites for social change.
Looking through the lens of black business history, Beauty Shop Politics shows how black beauticians in the Jim Crow era parlayed their economic independence and access to a public community space into platforms for activism. Tiffany M. Gill argues that the beauty industry played a crucial role in the creation of the modern black female identity and that the seemingly frivolous space of a beauty salon actually has stimulated social, political, and economic change.
Gill shows how African American beauty entrepreneurs built and sustained a vibrant culture of activism in beauty salons and schools. Enhanced by lucid portrayals of black beauticians and drawing on archival research and oral histories, Beauty Shop Politics conveys the everyday operations and rich culture of black beauty salons as well as their role in building community.

O'Donoghue-Lindy, Lisa. Women Creating Wealth: A Collection of Stories of Female Entrepreneurs from Africa. Marley Communications, 2017.
A collection of almost 60 stories of women entrepreneurs from across Africa from a variety of sectors, ranging from small to large business owners. These diverse profiles, offer lessons for other female entrepreneurs looking to start or grow enterprises, understand these business owners' motivations, the barriers they faced, how they overcame challenges, and the plans they have for the future. These portraits aim to paint a picture of what sets high growth entrepreneurs in a class of their own.

Oyewumi, Oyeronke. African Women and Feminism: Reflecting on the Politics of Sisterhood. Africa World Press, 2004.
The relationship between African women and feminism is a contentious one. Embedded in this connection is the question of whether sisterhood—a mantra assuming a common oppression of all women and signifying feminist international/cross-cultural relations—describes the symbolic and functional representation of African women. The contributors in this book are aware of the global discourse on women as articulated by Western feminists and interrogate the issues raised by the misinterpretation of African women of both black and white American feminists. The implications of the dominance of Western men and women in the production of knowledge about Africa are also explored.

Phillips, Layli (Editor). The womanist reader. Routledge Press, 2007.The Womanist Reader is the first volume to anthologize the major works of womanist scholarship. Charting the course of womanist theory from its genesis as Alice Walker's African-American feminism, through Chikwenye Okonjo Ogunyemi's African womanism and Clenora Hudson-Weems' Africana womanism, to its present-day expression as a global, anti-oppressionist perspective rooted in the praxis of everyday women of color, this interdisciplinary reader traces the rich and diverse history of a quarter century of womanist thought.

Rodriguez, Cheryl R. (Editor, Contributor) and Tsikata, Dzodzi (Editor) et. al. Transatlantic Feminisms: Women and Gender Studies in Africa and the Diaspora. Lexington Books, 2016.
Transatlantic Feminisms is an interdisciplinary collection of original feminist research on women’s lives in Africa and the African diaspora. Demonstrating the power and value of transcontinental connections and exchanges between feminist thinkers, this unique collection of fifteen essays addresses the need for global perspectives on gender, ethnicity, race and class. Examining diverse topics and questions in contemporary feminist research, the authors describe and analyze women’s lives in a host of vibrant, compelling locations.

Steady, Filomina Chioma. Women and Collective Action in Africa: Development, Democratization, and Empowerment, with Special Focus on Sierra Leone. Palgrave Macmillan, 2006.
This book examines women's movements and women's collective action in Africa. Steady begins her examination in pre-colonial times, moving through the colonial period to the present. She looks at the various arenas which collective action has and can influence, comparing the impact on economic growth, education, democratizations, family formation, and women's rights.

Wamariya, Clemantine and Weil, Elizabeth. The Girl Who Smiled Beads: A Story of War and What Comes After. Crown, 2018.
Clemantine Wamariya was six years old when her mother and father began to speak in whispers, when neighbors began to disappear, and when she heard the loud, ugly sounds her brother said were thunder. In 1994, she and her fifteen-year-old sister, Claire, fled the Rwandan massacre and spent the next six years migrating through seven African countries, searching for safety—perpetually hungry, imprisoned and abused, enduring and escaping refugee camps, finding unexpected kindness, witnessing inhuman cruelty. They did not know whether their parents were dead or alive.
When Clemantine was twelve, she and her sister were granted refugee status in the United States; there, in Chicago, their lives diverged.
The book provokes the reader to look beyond the label of “victim” and recognize the power of the imagination to transcend even the most profound injuries and aftershocks. Devastating yet beautiful, and bracingly original, it is a powerful testament to her commitment to constructing a life on her own terms.

Wingfield, Adia Harvey. Doing Business With Beauty: Black Women, Hair Salons, and the Racial Enclave Economy. Rowman & Littlefield Publishers, Inc., 2009.
In Doing Business with Beauty, sociologist Adia Harvey Wingfield examines this often-overlooked group and one of the most popular businesses run by these entrepreneurs: hair salons. Using in-depth interviews with hair salon owners, Doing Business with Beauty explores several facets of the business of owning a hair salon, including the process of becoming an owner, the dynamics of the owner-employee relationship, and the factors that steer black women to work in the hair industry. Through Harvey Wingfield's research we can understand the black female business owner's struggle for autonomy and her success in entrepreneurship.

Yancy, George. Black Bodies, White Gazes. Rl; 2016.
Black Bodies, White Gazes: The Continuing Significance of Race understands Black embodiment within the context of white hegemony within the context of a racist, anti-Black world. Yancy demonstrates that the Black body is a historically lived text on which whites have inscribed their projections which speak equally forcefully to whites' own self-conceptualizations.
The 2008 text was updated in 2016 following the deaths of Trayvon Martin and other black youths in recent years, students on campuses across America have joined professors and activists in calling for justice and increased awareness that Black Lives Matter. In this second edition of his trenchant and provocative book, George Yancy offers students the theoretical framework they crave for understanding the violence perpetrated against the Black body. Drawing from the lives of Ossie Davis, Frantz Fanon, Malcolm X, and W. E. B. Du Bois, as well as his own experience, and fully updated to account for what has transpired since the rise of the Black Lives Matter movement.

Yancy, George. Look, A White!: Philosophical Essays on Whiteness. Temple University Press, 2012.
Look, a White! returns the problem of whiteness to white people. Prompted by Eric Holder's charge, that as Americans, we are cowards when it comes to discussing the issue of race, noted philosopher George Yancy's essays map out a structure of whiteness.
He considers whiteness within the context of racial embodiment, film, pedagogy, colonialism, its "danger," and its position within the work of specific writers. Identifying the embedded and opaque ways white power and privilege operate, Yancy argues that the Black countergaze can function as a "gift" to whites in terms of seeing their own whiteness more effectively.