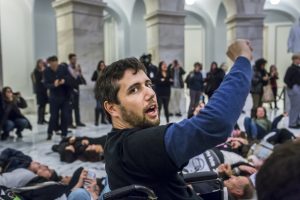 New York, N.Y. – November 30, 2021 – A rising star in progressive politics and a new father, Ady Barkan’s life was upended when he was diagnosed with ALS at age 32. But after a chance encounter with a U.S. Senator on an airplane catapults him to fame, Ady and a motley crew of activists barnstorm across the country, igniting a movement for universal healthcare in a journey that transforms his belief in what is possible for his country and his family. Not Going Quietly premieres on the award-winning PBS television series POV on Monday, January 24th, 2022 at 9:00 p.m. ET (check local listings) on PBS, pbs.org, and the PBS Video app.

An inspiring and sobering story about disability, activism and family – and Ady’s fight for accessible healthcare – the documentary Not Going Quietly is directed by Nicholas Bruckman (director of La Americana, producer of Valley of Saints) and produced by Amanda Roddy.

Called the “most powerful activist in America," Barkan's “Be a Hero” campaign landed him on Time Magazine’s list of the 100 Most Influential People of 2020 and a speaking spot at the 2020 Democratic National Convention. Prior to the convention, Ady interviewed the candidates vying for the party’s nomination about how they would address the nation’s broken healthcare system. And as millions still go without the medical care they need, those fighting for Medicare for All continually draw inspiration from Ady’s story.

Not Going Quietly offers a nuanced look behind the scenes of Ady’s life and work as he navigates the successes and struggles of his fight for universal healthcare while dealing with ALS. Facing the loss of his natural speaking voice, Ady recognizes the power of his words and personal story to spark change, remaining committed to using his platform to advocate for others. Transformed by an illness that made strikingly clear how healthcare systems need fixing, Ady’s story is ultimately one of perseverance and hope, reveling in the possibility for change and the joy of solidarity.

"In putting his personal struggle on display as a tool for social change, Ady’s vulnerability, strength, and commitment moved us deeply as filmmakers. Our goal in making this film, through Ady’s example, is to explore how personal storytelling is one of the most powerful tools to take part in our democracy and help build a more just society – a goal we share with the incredible team at POV," said director Nicholas Bruckman and producer Amanda Roddy.

“Not Going Quietly connects us with a brave and generous protagonist who, in the hands of these gifted filmmakers, becomes an active participant in the telling of his own story. Ady’s willingness to let us into his life, even in his most challenging moments, is an act of kindness and an invitation to solidarity. His spirit and courage are an inspiration and a reminder of our shared responsibility to care for each other," said Chris White, executive producer, POV.

Following the broadcast of Not Going Quietly, the short film Team Meryland will make its public television broadcast debut as part of POV Shorts' fourth season. The film, directed by Gabriel Gaurano, takes place in the projects of Watts where Meryland Gonzales, a twelve-year-old female boxer trains to be crowned the 2019 Junior Olympics champion. Meanwhile, her immigrant parents work tirelessly to give their child a shot at achieving her dreams. Team Meryland was an official selection at both the Big Sky Documentary Film Festival and the Palm Springs International Film Festival.

Nicholas Bruckman produced the feature film Valley of Saints, which won the Audience Award in the World Cinema competition at the Sundance Film Festival and was nominated for an Independent Spirit award. The film was released on Netflix and was a New York Times Critics Pick.

He previously directed the feature documentary La Americana, which won the best documentary prize at the NY and LA Latino Film Festivals. The film broadcast worldwide on networks including PBS, Nat Geo, and Al Jazeera.

Bruckman's work has received support from foundations including the Fledgling Fund, Cinereach, NYSCA, NYFA, and the Alfred P. Sloan Foundation. He is the founder of People's Television, a New York and D.C.-based branded & original content company.

Amanda Roddy is an award-winning documentary filmmaker. She has led projects as a director, producer, and writer for clients such as the Democratic National Convention, Covergirl, Elizabeth Warren’s presidential Campaign, Equal Justice Works, The Nature Conservancy, and The Equity Fund. Recently, she directed and produced a two-minute primetime television spot that appeared on NBC during the 2020 Democratic National Convention. Her work has been supported by the International Documentary Association, Rooftop Films, Film Independent, IFP, and HBO.

Growing up as the youngest of seven kids, Gabe got his start by making childhood action films on his mom's videocamera. His latest short, Team Meryland, was a finalist at the 2019 Tribeca If/Then contest and had its world premiere at the 2021 Oscar qualifying Big Sky Documentary Film Festival.

Julia Elihu is an Iranian-American writer and director who strives to tell untold stories through her own passionate lens. Julia’s love for her Persian culture inspires her to create, and pushes her to tell stories from a unique perspective. In 2018, she brought these themes to her short film Yasmin, which is based on her mother’s story of immigration and was a Grand Jury Prize Nominee at the 2018 AFI Film Festival. More recently, she produced Team Meryland which was acquired by The New Yorker and POV Shorts. Julia's latest short film, Winter of '79, had its World Premiere at the Oscar-Qualifying Rhode Island International Film Festival, and its West Coast Premiere at the Oscar-Qualifying Hollyshorts Film Festival.

Produced by American Documentary, POV is the longest-running independent documentary showcase on American television. Since 1988, POV has presented films on PBS that capture the full spectrum of the human experience, with a long commitment to centering women and people of color in front of, and behind, the camera. The series is known for introducing generations of viewers to groundbreaking works like Tongues Untied, American Promise and Minding The Gap and innovative filmmakers including Jonathan Demme, Laura Poitras and Nanfu Wang. In 2018, POV Shorts launched as one of the first PBS series dedicated to bold and timely short-form documentaries. All POV programs are broadcast nationally on PBS, POV.org and the PBS Video app.

POV goes beyond the broadcast to bring powerful nonfiction storytelling to viewers wherever they are. Free educational resources accompany every film and a community network of thousands of partners nationwide work with POV to spark dialogue around today’s most pressing issues. POV continues to explore the future of documentary through innovative productions with partners such as The New York Times and The National Film Board of Canada and on platforms including Snapchat and Instagram.

PBS, with more than 330 member stations, offers all Americans the opportunity to explore new ideas and new worlds through television and digital content. Each month, PBS reaches over 120 million people through television and 26 million people online, inviting them to experience the worlds of science, history, nature and public affairs; to hear diverse viewpoints; and to take front row seats to world-class drama and performances. PBS’ broad array of programs has been consistently honored by the industry’s most coveted award competitions. Teachers of children from pre-K through 12th grade turn to PBS for digital content and services that help bring classroom lessons to life. Decades of research confirms that PBS’ premier children’s media service, PBS KIDS, helps children build critical literacy, math and social-emotional skills, enabling them to find success in school and life. Delivered through member stations, PBS KIDS offers high-quality educational content on TV – including a 24/7 channel, online at pbskids.org, via an array of mobile apps and in communities across America. More information about PBS is available at www.pbs.org, one of the leading dot-org websites on the internet, or by following PBS on Twitter, Facebook or through our apps for mobile and connected devices. Specific program information and updates for press are available at pbs.org/pressroom or by following PBS Communications on Twitter.