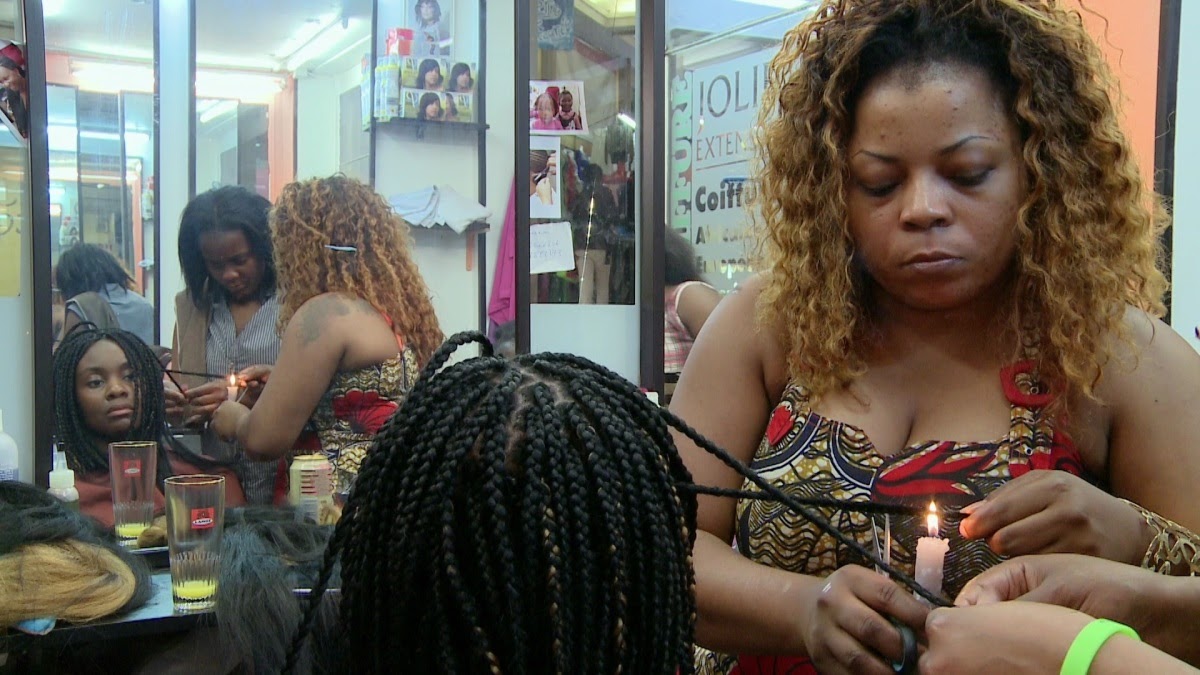 A Story of Pain and Glory for African Migrants in Brussels

Sabine’s hands move quickly and precisely as she tightly braids hair in her tiny salon. The sign outside offers African, European, or American hairstyles. Sabine is the charismatic, larger-than-life personality crammed into Jolie Coiffure, a tiny shop in the immigrant Brussels district of Matonge. Here, she and her employees style extensions and glue lashes on patrons, many of them undocumented immigrants, to make them feel beautiful and provide an escape from the harsh realities of their lives. More than a place for women to get their hair done, Jolie Coiffure under Sabine’s leadership serves as a community hub for West African women; a place to share rumors about government programs to legalize migrants and talk about life back home in Cameroon.

"One feels lucky to find a film in which the story captured is amplified and made more powerful by the director’s formal and unique aesthetic approach,'' said Chris White, Executive Producer for POV. “Rosine’s intimate focus–on one woman within the walls of her salon–reveals deep and far-reaching truths about our communities and the world we live in. Chez Jolie Coiffure is remarkable."

“I wanted to make films because I didn't see enough people who looked like me, my culture, my reality,” said Mbakam. “I made the choice to shoot Chez Jolie Coiffure myself. I handled the image and sound solo in order to build a more equal relationship with my subject. It was important to me that there was no intermediary between me and Sabine. The presence of a third person would not have allowed her to speak so freely. The West has long filmed Africa with condescension and superiority. Through this film we see the world from another point of view. I sought to document a reality from within and displace the stereotypes and clichés often imposed on Africans.”

At the start of Chez Jolie Coiffure, Mbakam, stands outside the salon, filming. Sabine calls her in, warning her it’s unsafe out in the hallway of the cramped urban mall. Mbakam sets up in the shop—and stays, becoming a regular fixture and presence. The cinematic “chamber piece,” meaning it takes place exclusively in one room, skillfully makes use of the salon’s many mirrors. Filmed over the course of a year, Mbakam documents the relentless journey of the hairdresser Sabine.

Sabine was born in Cameroon. She leaves her hometown and travels to Lebanon to become a housekeeper – a path many African women use to get to Europe. Once in Lebanon, Sabine is stripped of her passport and reduced into slavery under the pretense of being a maid. After many years of servitude, she escapes, traveling alone mostly by foot through Syria, Turkey and Greece, Sabine finally arrives in Belgium with little money and no place to live. She eventually settles in Matonge and becomes the manager of Jolie Coiffure.

When telling her story, Sabine speaks of it in third person to avoid the emotional weight of her journey. “You can’t describe it,” Sabine says of the gruesome migration. “You have to live it.”

Though Sabine has created a home in her own space, she remains an outsider in Brussels. Cultural clashes with locals and racial taunts by white students happen daily. When a group of European tourists start taking pictures of the stylists at work and are asked to stop one makes the snark remark “We pay to go to your zoos.” Belgian immigration policies are strict and raids by immigration officers are a regular occurrence. At one point in Chez Jolie Coiffure, word has it that the immigration police are coming through, Sabine hurriedly turns off all the lights and quickly vanishes out the door.

Critical acclaim garnered for Mbakam’s film Chez Jolie Coiffure has been instrumental in allowing Sabine to remain safely in Belgium and apply for citizenship. She has become a role model and mentor to many Africans struggling to emigrate to Belgium and other European countries.

Rosine Mbakam grew up in Cameroon. She chose cinema as her metier very early in life, and trained in Yaoundé with the Centro Orientamento Educativo (COE) where she learned cinematography, editing and production. She collaborated and directed several films with COE before joining STV (Spectrum Television) in 2003, where she worked with Mactar Sylla. In 2007, she left Cameroon to study at the Institut Supérieur des Arts (INSAS) in Brussels, Belgium. She directed and co-directed several short films, including You Will Be My Ally and a portrait of the Congolese artist Freddy Tsimba "Mavambu." In 2014, she and Geoffroy Cernaix founded Tândor Productions, which produced her first feature film, The Two Faces of a Bamileke Woman (2016), which won prizes including the prestigious Discovery Award from the Society of Media Authors and Creators (SCAM). The Two Faces of a Bamileke Woman, is coming to DVD from Icarus Films on July 28, 2020. Chez Jolie Coiffure (2019) is her second film.