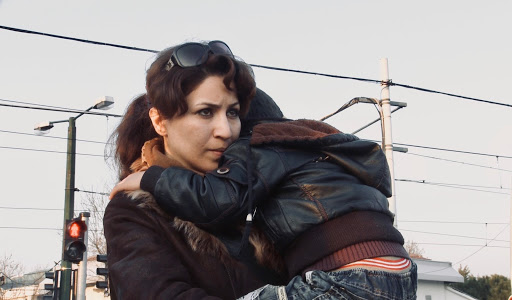 How did you discover Leila, Sahand, Mani, and their dilemma? Where is the family now? Did they ever make it to America or Canada?

Sahand met my co-director, Morten, when Morten was visiting Iran. Morten was a tourist and Sahand was sent to the bazar to chat with tourists and then give this information to the secret service. But they formed a friendship, and when Sahand and Leila decided to escape they called Morten and asked him to document their life so that they might feel safer. Morten showed me the material he shot the first year, and I felt the family was very expressive in front of the camera so we began our collaboration.

The family is still in Turkey in the same situation as you see in the film. They have basic rights through their teaching jobs, but they are not secure and their financial situation is difficult because of the school closures. They have had no salaries for a long time.

The film documents intimate and humanizing moments of the lives of real refugees over the course of 6 years. At one point Leila laments on being “stateless” in one of her therapy sessions. At another point, Mani throws a tantrum when he is told who his real father is. What was it like to witness the family over time as they endured these moments of vulnerability and uncertainty?

For a person making documentary films like me, it’s great when your participants are expressive and going through important things in front of the camera. I, of course, feel sorry for them when things go wrong, but drama is definitely important to make a successful film, so it’s a bit double-sided. The fact that we followed the family for so long meant that we didn’t force reality to match the film’s needs, and we had built up the right amount of trust to make the family comfortable with giving us these vulnerable moments. We captured all the big and small moments of their lives.

What would have happened if Leila and Sahand were not approved to reside in Turkey long-term? Did you prepare for the possibility of going back to Iran? What were your feelings?

Well, you have to be open to the possibility for anything to happen. You focus on real people and see what life does to them and life is not always pretty. The family is not approved to stay long term in Turkey, but they are allowed to stay so long as they have a job. They got their jobs some years into the film, so we knew they could probably stay for the last 4 years of filming. But that wasn’t quite stable either because, again, it’s only so long as they have jobs. That said, it’s heartbreaking to watch my friends suffer while I can just go back to my safe home with my EU passport. So, as a storyteller, I feel it’s my duty to shine a light on this, to not get discouraged, not close my eyes, but find a way to share their pain in a cinematic way.

What did you hope to accomplish by creating this film? And why did you tell it through the lens of a love story?

For good reason, we have heard a lot about Syrian refugees and immigrants from

Africa and the Middle East seeking Europe’s 'promised land'. We don’t often hear much about their individual stories, yet they exist in great numbers. Obviously, the ‘category’ of refugees is made up of people who are every bit as different and diverse as everyone who isn’t a refugee. The film thus makes the simple point that it could have just as well been you or me to be thrust into that situation.

The love story angle helped us approach the theme from a different angle and maybe increase sensitivity towards how we understand refugees. From my own perspective, I had been rather numb towards what's been going on because I had heard so much: the repetitive stories about awful escapes from war, people diving in the ocean, camps and closed borders, but nobody in power seemed to want to do anything about it. So, maybe through a more empathetic approach, we could escape the numbness.

I felt like we could make a film that could create nuance within debates about refugees and humanise the statistics by presenting people we can mirror ourselves in. I have a lot in common with the two protagonists, Leila and Sahand. I also have a son and small family trinity, and I have seen a lot of Bergman films like they have. So perhaps it’s easier for me, and others like me, to understand them and relate to the tough situation they’re in. Or at least that was the idea.

Right now I am on my way back to Denmark from Sweden where I have been filming a story about tourism and how it’s under a lot of pressure right now due to COVID-19 restrictions. My colleague and I are trying out a new method where we work in Scandinavia and cooperate with directors out in the world in some of the major tourist destinations. It’s interesting to work with local directors, in a COVID-safe way, to make an effort to capture some of the changes the world is going through, even though we cannot move much.