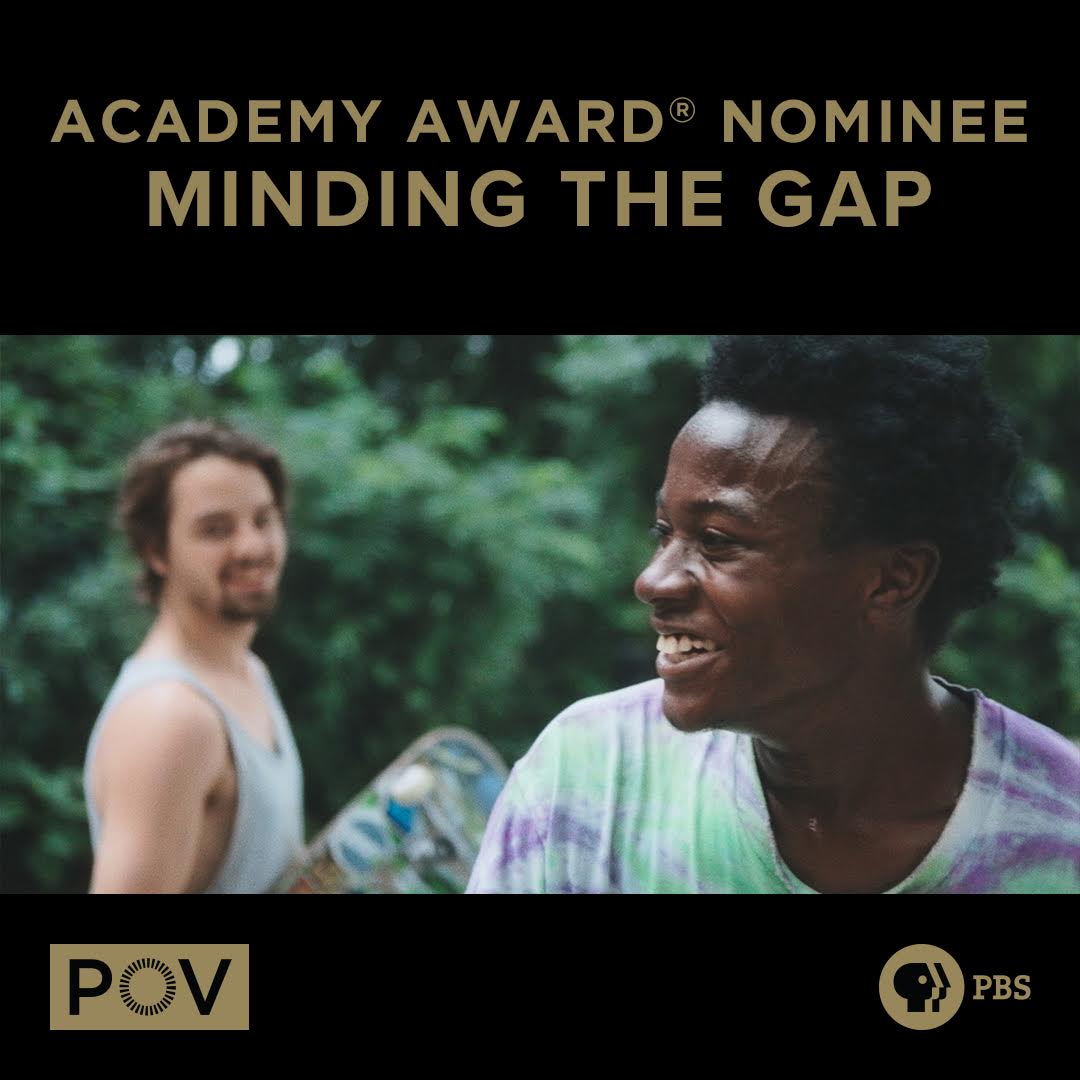 MINDING THE GAP WILL HAVE ITS NATIONAL TELEVISION DEBUT ON PBS DOCUMENTARY SERIES POV ON MONDAY, FEBRUARY 18 AT 9 P.M.

Directed by Bing Liu, Minding the Gap has its national broadcast debut on the PBS documentary series POV and pov.org on Monday, February 18 at 9 p.m. (check local listings). The film is a co-production of ITVS, Kartemquin Films and American Documentary | POV and a co-presentation with the Center for Asian American Media (CAAM). POV is American television’s longest-running independent documentary series now in its 31st season.

The POV Shorts film A Night at the Garden, directed by Marshall Curry and produced by Field of Vision, was also nominated today in the Documentary Short Subject category. The two films were among six named in the documentary shortlists this year.

Minding the Gap gives us an intimate look into friendships initiated via a passion for skateboarding and cemented by shared experience. The resulting bonds are as strong as any between members of a conventional family. This captivating coming-of-age story tackles topics like domestic violence, relationships and masculinity, all while its three central subjects approach adulthood. Minding the Gap is a compelling story that is relatable across age, class and race.

Minding the Gap had its world premiere at the 2018 Sundance Film Festival where director Bing Liu won the Special Jury Prize for Breakthrough Filmmaking. The film won the Critics’ Choice Documentary Award for Best First Time Director (Bing Liu), and it won two Cinema Eye Honors for Outstanding Achievement in a Debut Feature Film (Bing Liu) and Outstanding Achievement in Editing (Joshua Altman, Bing Liu). The film won the Truer Than Fiction Award in the Film Independent Spirit Awards, the IndieWire Critics' Poll for Best Documentary Feature, the New York Film Critics Circle Award for Best Non-Fiction Film and was a nominee for the Gotham Awards, among many other accolades this year.

This documentary chronicles the lives of the filmmaker’s friends from a small town outside Chicago. Bing artfully compiles clips from their early teens up to the present day, following each of them through every step of their lives. We see them grow into young adults, grappling with what it means to be men in present-day America.

Skateboarding is a central thread throughout the film. Accompanying the group on extensive high-speed rides, we begin to see how skateboarding is not just something to do, but a shared activity that is deeply meditative and therapeutic for each of them. Trying new tricks, encouraging each other and spending time together, they form a bond much stronger than the mere term “friend” indicates. Skateboarding is their escape.

Zack, a subject of the film and Bing’s friend, explains the power of this project: “Some people do take their negative experiences and turn them into powerful, positive things.” This film does exactly that. It gives people a space to talk openly about their experiences. And Keire, another subject and friend of Bing’s, dives into one of the main topics of the film when he says to Bing, “I get mad at skateboarding, like, a lot, but at the end of the day I love it so much that I can’t stay mad at it.”

“But it hurts you?” Bing asks. Keire responds, “Yeah, so did my dad, but I love him to death.”

“This is a fitting capstone to a wild year for Bing and his film,” said Chris White, executive producer for POV. “Minding the Gap is a profound and cinematic exploration of what it means to become a man, all cloaked in the revelry of youth. The skateboarding footage is thrilling—sure to turn skate-skeptics into fans—and gives us an intimate way to connect with all of the young men and their stories. This is a revelatory, heartbreaking and hopeful film that opens a much-needed discussion about experiences usually kept in the shadows. With an Oscar nominee on public television, Minding the Gap will receive the wide, national audience it deserves.”

This is a revelatory, heartbreaking and hopeful film that opens a much-needed discussion about experiences usually kept in the shadows. With an Oscar nominee on public television, Minding the Gap will receive the wide, national audience it deserves.

Bing Liu is a Chicago-based director and cinematographer listed by Variety as one of ten documentary filmmakers to watch in 2018. His critically acclaimed documentary, Minding the Gap, has earned over 35 award recognitions since its premiere at the 2018 Sundance Film Festival, where it took home the Special Jury Award for Breakthrough Filmmaking. He directed three storylines on America To Me, a 10-hour documentary series from Steve James that examines racial inequality in the U.S. educational system, produced by Participant Media and airing on Starz. He is a member of the Directors Guild of America and was a member of the International Cinematographers Guild for seven years. A 2017 Film Independent Fellow and Garrett Scott Documentary Development Grant recipient, he graduated magna cum laude with a B.A. in Literature from the University of Illinois at Chicago in 2011.

Diane Quon lived in Los Angeles for more than 17 years before moving back to her hometown of Chicago. While in Los Angeles, she worked at NBC and at Paramount Pictures, where she was most recently the vice president of marketing. She is currently producing multiple documentaries with Kartemquin Films, including Minding the Gap, directed by Bing Liu; Left-Handed Pianist, co-directed by Gordon Quinn and Leslie Simmer; The Dilemma of Desire, directed by Peabody Award winner Maria Finitzo; and Finding Yingying, directed by Diverse Voices in Docs fellow Jiayan “Jenny” Shi. Quon is a 2017 and 2018 Film Independent Fellow and is currently developing a fiction film based on the New York Times best-seller Hotel on the Corner of Bitter and Sweet.