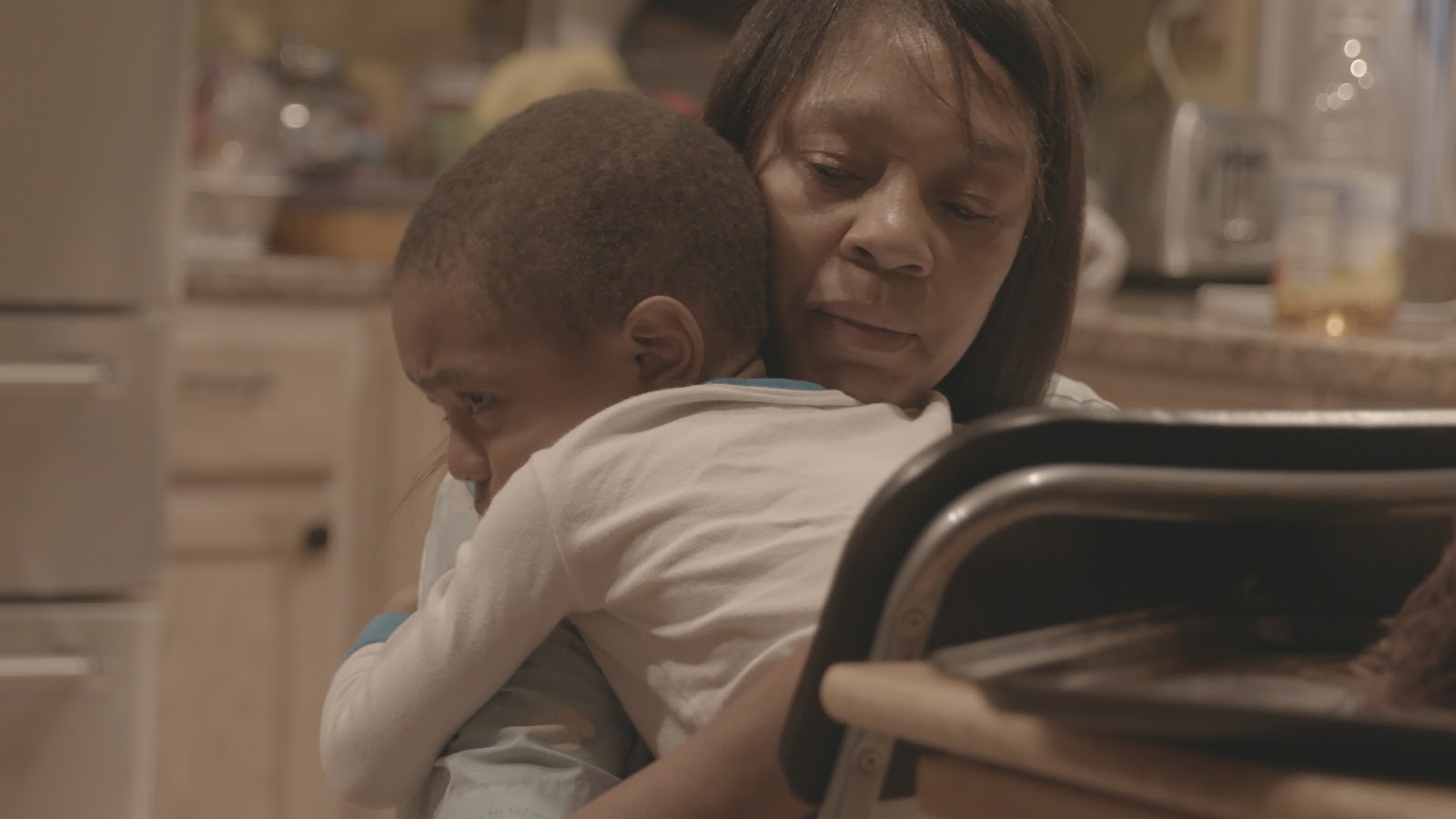 New York, NY — April 6, 2021 — American Documentary is proud to announce the national broadcast premiere of PBS alumnus Loira Limbal’s (Estilo Hip Hop) second feature documentary, Through the Night, premiering Monday, May 10, 2021 on PBS at 10 p.m. ET (check local listings) and at pov.org as part of the program's 33rd season. The film will also be available to stream for free at pov.org until June 10, 2021.

An official selection at the 2020 Tribeca Film Festival as well as at DOC NYC and AFI DOCS, Through the Night is an intimate cinema verité portrait of three working mothers whose lives intersect at a 24-hour daycare center in New Rochelle, New York: a mother working the overnight shift as an essential worker at a pediatric hospital; another holding down three jobs in order to support her family, and a woman who, for over two decades, has cared for the children whose parents have nowhere else to turn. A timely portrait of resilience, love, and the fundamental role of caregivers in society, Through the Night showcases the multiplicity of “women’s work” — paid, underpaid, and unpaid; emotional and physical; domestic and career-oriented — all while negotiating the terms of a dignified existence under the three arrows of racism, sexism, and capitalism in America. In the wake of the COVID-19 pandemic, Through the Night and the stories it centers take on an even greater sense of urgency and profound meaning.

In subtle strokes, Limbal takes the viewer into the world of Dee’s Tots, a vibrant daycare center that caters to all types of family situations and scenarios. Children are picked up and dropped off by parents who are tired but appreciative, many of them coming from overnight shifts or long days of work, sometimes at multiple jobs. The families that Deloris (or Nunu, as the children call her) serves are explicit in their need for her and her service; she’s a part of their family, and in many cases, she’s the glue that holds them together, an integral piece of the puzzle that helps make their day-to-day schedules possible. Through the Night spotlights the fact that these parents often have nowhere else to turn, putting into sharp focus the networks of pressure placed on single-parent households led by women of color. The capitalist system, it emphasizes, isn’t set up to take care of these essential workers that keep our economy afloat; they battle racism, sexism, and systemic apathy as they try to do what’s best for their families.

Through the Night elevates motherhood and the politics of care to the big screen, holding space for the communities of women that help raise generations of children so that they can go on to live healthy, successful, and happy lives. As the documentary goes on to reveal, this selflessness often comes at the cost of the health and well-being of the caregivers themselves. Within the course of the film, Nunu has to confront her own personal and medical needs, realizing that she must look out for herself in order to continue serving the children and families that rely on her. Through the Night is populated by hard-working, compassionate, and profoundly loving women that give faces and names to the countless working-class Black and Latinx mothers providing for their families in this country.

Through her intimate approach and closely-nurtured relationships with the people on screen, Limbal presents a universe with these women at its core. A heart-warming portrait of love above all else, Through the Night reminds us of the sacrifices all mothers make and the disproportionate sacrifices mothers of color are expected to make. This latest project once again confirms Limbal as a director to watch at the forefront of contemporary documentary.

“POV was very proud to come on early as co-producers of Through the Night, in partnership with ITVS. This is the type of resonant and thoughtful filmmaking that public media should be supporting and that audiences want to see” said executive director of POV | American Documentary Justine Nagan. “With extraordinary empathy and a visionary sense for detail, Loira’s film is a testament not only to the dehumanizing grind of the modern economy, but also to the beauty, community and love of the mothers, caregivers and children who carve out rich and full lives in the midst of systemic injustice. Both timely and universal, Through the Night is an incredible and important film, and we can’t wait to share it with PBS viewers across the country.”

“Through the Night is my love letter to single mothers and caregivers,” says director Loira Limbal. “I was raised by an amazing cast of Black and Latinx women who performed miraculous acts of resilience, creativity, and subversion on a daily basis. Unfortunately, when I look around at our popular culture these women are rarely seen and when they do appear, they are represented in reductive ways that often amount to caricatures. My vision as a filmmaker is to flood our popular culture with beautifully complex portrayals of the lives of working-class women of color so that we have new gazes and new ways of seeing ourselves. Through the Night is the story of our protagonists, but it’s also the story of countless women in my community. It’s my mother’s story. It’s my own story. And while I want to shine a light on the many systemic problems in our society, I ultimately want to lift up the abundance of love and interdependence among the women, children, and families in our film and our communities.”

Following the premiere of Through the Night on May 10, 2021, POV will also premiere the short film Standing Above the Clouds. The film follows Native Hawaiian mother-daughter activists as they stand to protect their sacred Mauna Kea from the building of the world’s largest telescope. Standing Above the Clouds is a co-production of Jalena Keane-Lee and Pacific Islanders in Communications with funding provided by the Corporation for Public Broadcasting, in association with American Documentary I POV.

"We decided Standing Above the Clouds was the perfect compliment to Through the Night for its powerful and beautiful depiction of passionate women doing what's necessary to protect their community. Courage, resilience and the legacy carried in the young are connective tissue linking these films," said Opal H. Bennett, Co-Producer, POV.

Through the Night Credits

Loira Limbal is an Afro-Dominican filmmaker and DJ interested in the creation of art that is nuanced and revelatory for communities of color. She is the Senior Vice President of Programs at Firelight Media. Limbal’s current film, Through the Night, is a feature documentary about a 24 hour daycare center. Through the Night is a New York Times Critics’ Pick and was selected for a world premiere at the 2020 Tribeca Film Festival. Her first film, Estilo Hip Hop, was a co-production of ITVS and aired on PBS in 2009. She is a Sundance Institute Fellow, NAACP Image Award nominee, a DOC NYC Documentary New Leader, Chicken & Egg Award recipient, and a former Ford Foundation JustFilms/Rockwood Fellow. Additionally, she co-produces and helms the popular Brooklyn monthly #APartyCalledRosiePerez. Limbal received a B.A. in History from Brown University and is a graduate of the Third World Newsreel's Film and Video Production Training Program. She lives in the Bronx with her two children.

Jameka Autry is a producer, director, and 2019 Sundance Creative Producing Fellow. In 2017 she was honored as an Impact Partners Creative Producers Fellow and in 2018 she was selected as part of the inaugural DOC NYC 40 Under 40 List. She was recently awarded the Sundance/A&E Brave Storyteller Award at the 2019 Sundance Film Festival and currently holds a Post Graduate Fellowship at the Investigative Reporting Program at the UC Berkeley School of Journalism.

Most recently she completed work on Through the Night, which premiered at the 2020 Tribeca Film Festival. Other producing works include Ernie & Joe: Crisis Cops, which won the jury grand prize at SXSW and Boston International Film Festival, and premiered on HBO in Fall 2019. Jameka has also produced Marathon: The Patriots Day Bombing (HBO), In My Father's House (Showtime), Matangi/Maya/M.I.A. (Sundance '18) and served as a Consulting Producer on We the Animals and Love Gilda.

Produced by American Documentary, POV is the longest-running independent documentary showcase on American television. Since 1988, POV has presented films on PBS that capture the full spectrum of the human experience, with a long commitment to centering women and people of color in front of, and behind, the camera. It was on POV that American television audiences were introduced to groundbreaking works like Tongues Untied, The Act of Killing and American Promise and innovative filmmakers such as Jonathan Demme, Nanfu Wang and Laura Poitras. In 2018, POV Shorts launched as one of the first PBS series dedicated to bold and timely short-form documentaries.