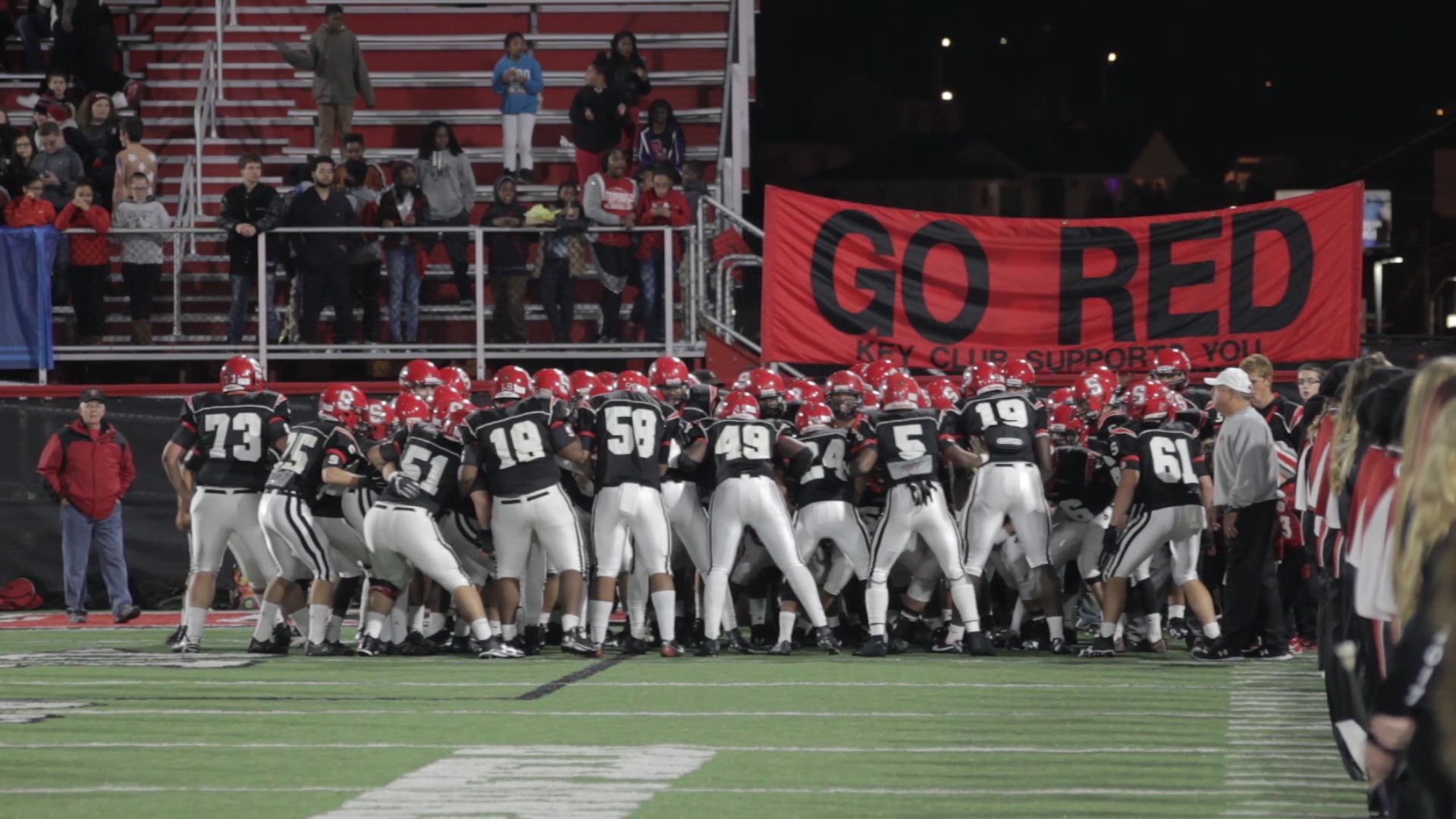 The film unflinchingly asks: “Why didn’t anyone stop it?”

At a pre-season party in small-town Steubenville, Ohio, a heinous crime took place: the assault of a teenage girl by members of the beloved high school football team. As it painstakingly reconstructs the night of the crime and its aftermath, Roll Red Roll uncovers the ingrained rape culture at the heart of the incident, acting as a cautionary tale about what can happen when teenage social media bullying runs rampant and adults look the other way.

What transpired in Steubenville went on to garner international media attention and resulted in the sentencing of two key offenders; but it was the disturbing social media evidence uncovered by crime blogger Alexandria Goddard, that provoked the most powerful questions about collusion. Not only did teen witnesses and bystanders discredit the victim, but teachers, parents and coaches seemed to protect the assailants. With unprecedented access, the film shares text messages, social media posts, police interviews and the unmasked responses of town residents.

Like many communities across the country, Steubenville takes pride in its high school athletics. Talented and promising young male athletes are practically town ambassadors, held in high regard by their classmates and the entire community. So when two of these young men are charged with the rape of another student, the entire social structure of Steubenville is threatened, and a legacy of sexual assault and forced silence spanning years is revealed.

The film looks closely at social media, a tool that turns out to be remarkably malleable depending on which party is involved. For students, social media documents the acts that took place, becoming a platform to engage in callous and desensitized mockery of the crime of rape. Local authorities use evidence gathered online to assist with their investigation of the case, including incriminating tweets and 400,000 text messages. For local crime blogger Alexandria Goddard, social media presents an opportunity to spread awareness about the high school’s toxic “rape culture” where a “boys-will-be-boys” attitude runs rampant. For the rest of the nation, disturbing images, video and dialogue revealed online create a shocking paper trail that anyone—from concerned citizens to hacktivist group Anonymous—can follow.

“Disturbing and illuminating, Roll Red Roll goes beyond the individuals directly responsible for the assault, widening its lens on the role of the community responsible for the victim’s wellbeing,” said Justine Nagan, executive producer/executive director of POV/American Documentary. “It presents a clear opportunity to shift our focus from the victim and the victim’s behavior to where the scrutiny belongs. More than five years after Steubenville made headlines, Roll Red Roll brings an essential perspective, and conversation, in this #MeToo era.”

Roll Red Roll has a robust impact campaign spearheaded by director Nancy Schwartzman, a globally-recognized human rights and anti-violence activist. The campaign is designed to engage men and boys in the conversation and the work to prevent sexual violence. A team of organizers is working with key partners in the athletic arena, and highlighting male advocates who actively challenge “boys will be boys” and other harmful norms around masculinity. Crafting teaching tools for coaches, parents and school administrators, the film illuminates the endemic issue from the perspective of those who enact the violence – the perpetrators and bystanders – and provides solutions to recognize patterns and eradicate the behavior.

Roll Red Roll is a story that I felt compelled to tell. I went to a high school not unlike Steubenville High School. I was a varsity athlete growing up and I come from a sports family. I understand the love and passion for sports and the intense relationship between a player and a coach, and what it means to your family for you to succeed on the field or court. The entire town of Steubenville coming together to celebrate and stand together every Friday is a beautiful thing. But to quote journalist Rachel Dissell, “Is this football town putting its daughters at risk, by protecting its sons in a situation like this?”

I felt like I knew these kids. They reflected some of the attitudes of my high school growing up. I wanted to explore the undercurrents of this compelling and frightful situation. The behavior wasn’t unfamiliar to me, but the social media platform was new. I wanted to know what empowered boys to talk about rape so casually, and broadcast it so publicly. It was all out there. That’s what made it so shocking.

The incident was planned and witnessed and an entire conversation was happening on social media about it. Prosecutors had to sift through over 400,000 text messages, hundreds of tweets to figure out what was evidence and what was bravado. I read the text messages and the social media posts, and they chilled me.

In Roll Red Roll we see young men acting with total privilege and without accountability. This wasn’t a “one-off” incident. This was a pattern of behavior that went beyond just a juvenile criminal trial, and led to a Grand Jury investigation of school officials. There should have been no question about what happened, and yet: the entire town was divided.

Why didn’t anyone stop it?

If we want to understand what is “rape culture” then here it is, laid bare. I just couldn’t look away. I’ve been working to transform culture around gender-based violence for over 10 years, using film and technology in service of these goals. I’ve always been fascinated by technology and youth culture, and how while technology is mainly neutral, it is the way we use it that is the variable. Seeing it overlap in the gender space—I was amazed at the power of social media: to incriminate, to empower and to shine a light on darkness. This entire thing was documented on social media and shared publicly. The bravado and the language used by the kids to talk about their classmates and young girls were astonishing. Anyone could see it. And the lack of empathy was chilling.

There were school administrators and teachers that heard rumors, and there were coaches who did nothing, or defended players without asking the tough questions. By doing nothing, and not taking it seriously, they were enabling it—excusing and justifying it, or looking the other way. This situation underscores the need for responsibility and for us to behave as friends, parents, family members, fellow classmates, teachers, school administrators, coaches and everyone in our communities to make sure that we believe survivors, we investigate carefully, and this behavior stops. Now we are at this incredible #MeToo moment, where men and mainstream audiences are listening to the reality of those who experience violence, and it’s time to shift our attention. We need to look closely at those who commit assault, so we can identify it, prevent it and ultimately transform our culture.

The bottom line is that rape is preventable. Steubenville is just like your town or school. Watching and studying the police interviews, the story shows clearly that rapists and bystanders are not “monsters”, they are us—our sons our fathers, our coaches, our friends. When we turn them into “monsters”—it makes rape hard to “see” and eradicate. We as individuals and communities have to take responsibility and teach accountability to our children so that they understand this is wrong. And that speaking up and intervening is the right thing to do, even if no one else is doing it. I am hopeful that audiences take these lessons to heart and will move forward in creating safe, loving and caring communities for our future generations.

Nancy Schwartzman is a director, producer, and tech founder who uses storytelling and technology to create safer communities for women and girls. Her debut feature, Roll Red Roll, world premiered at the Tribeca Film Festival in 2018, had its international premiere at Hot Docs, is the winner of seven feature documentary awards and played over 40 international festivals. For Roll Red Roll, Nancy received the Adrienne Shelly Foundation’s Excellence in Filmmaking Award. The film was nominated for a Cinema Eye Spotlight Award, and is the winner of Best Documentary at the Florida Film Festival, Best in Show at Bend Film Festival, Best Documentary at Monmouth Film Festival, Best Social Impact Doc at Chagrin Falls Festival, and Visualizing History at Middlebury Film Festival. She is the creator of the Circle of 6 mobile app, winner of Vice President Biden’s “App Against Abuse” challenge, an anti-violence tool used by over 350,000 in 36 countries to link users safely to a trusted circle of friends to promote bystander intervention and vetted safety resources. The app has been recognized by the United Nations, Good Morning America, Wired, Cosmopolitan, NPR and more.

Her first film, The Line, a short documentary examining consent was used by the White House for a campaign around sexuality, and her follow-up short, xoxosms, was on PBS/POV and BBC exploring love between two teenagers, bridged by technology.

Steven Lake is a documentary producer creating social impact films with commercial reach. He is the producer of Roll Red Roll which premiered at Tribeca 2018, screened at over 40 international festivals and went on to have a theatrical run in the U.S. The film was called “essential viewing” by the Hollywood Reporter, “Raw and pressing” by Anthony Lane of The New Yorker and was a Critics’ Pick for The New York Times. His feature debut documentary, Drying for Freedom (Amazon Prime), and was the winner of Climate Week’s Best Artistic Response Award. Steven is specializing in security conscious film-making, using new technologies to create safe and secure workflows for films to protect them and their highly sensitive content. He has produced work in collaboration with The Guardian and Gucci, Doc Society, TFI, Ford Foundation, Fork Films and the BFI.

Eliza Licht is an industry leader in developing and implementing engagement strategies to maximize the impact and visibility of documentary films. Before starting Licht Creative Consulting, she spent 17 years building and expanding the community engagement and education department at the PBS documentary series POV.

Produced by American Documentary, POV is the longest-running independent documentary showcase on American television. Since 1988 on PBS, POV has presented films that capture the full spectrum of the human experience, with a long commitment to centering women and people of color in front of, and behind, the camera. It's on POV where American television audiences were introduced to groundbreaking works like Tongues Untied, The Act of Killing and American Promise and innovative filmmakers including Jonathan Demme, Nanfu Wang, and Laura Poitras. In 2018, POV Shorts launched as the first PBS series dedicated to bold and timely short-form documentaries.Over a generation, POV has championed accessibility and innovation in nonfiction storytelling. POV Engage works with educators, community organizations and PBS stations to present more than 800 free screenings every year, inspiring dialogue around today's most pressing social issues. The series' interactive arm, POV Spark, creates and advances experiential forms of storytelling and programming, redefining U.S. public media to be more inclusive of emerging technologies and interactive makers.POV films and projects have won 38 Emmy Awards, 22 George Foster Peabody Awards, 12 Alfred I. duPont-Columbia University Awards, three Academy Awards and the first-ever George Polk Documentary Film Award. Learn more at pbs.org/pov and follow @povdocs on Twitter, Instagram, and Facebook.American Documentary, Inc. (www.amdoc.org)