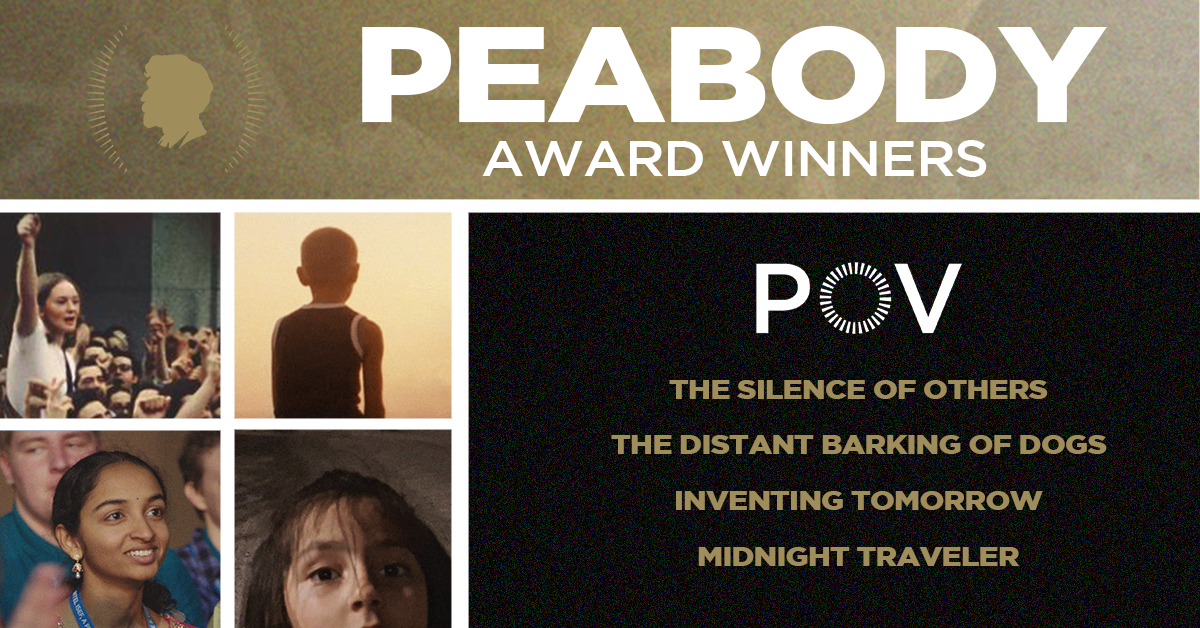 Four POV films won Peabodys: The Distant Barking of Dogs, Inventing Tomorrow, Midnight Traveler, and The Silence of Others; Two others were nominated: América and Roll Red Roll; PBS led nominations with 11 overall.

New York, N.Y. — June 10, 2020 — Today, four POV films were named winners in the Documentary Category of the 79th Annual Peabody Awards, the oldest major electronic media award in the United States. POV films comprised nearly one third of the 20 documentaries nominated, while PBS led overall nominations with 11 out of the 60 programs selected. The winning films are The Distant Barking of Dogs, Inventing Tomorrow, Midnight Traveler, and The Silence of Others.

POV is the longest-running independent documentary showcase on American television. POV films and projects have won 25 Peabody Awards (including at least one award seven years in a row), 38 Emmy Awards, three Academy Awards, 14 duPont-Columbia awards, among others. In 2019, POV films Minding The Gap and The Apology received the Peabody prize in the Documentary category.

“The films recognized are powerful stories of strength and resilience.” said Justine Nagan, one of the executive producers of POV. “This prestigious recognition for their craft, vision and long standing impact honors all involved. We are so proud to have played our part in bringing these films to American audiences through public media and community engagement.”

Margaret Drain, Board Chair of American Documentary, said, “POV has a long history of showcasing the best nonfiction work exposing the larger issues of social justice and the intimate struggles of ordinary people. Our thanks to the independent producing community, bravely determined to bring these stories to life and to the creative staff at POV, dedicated to shining the spotlight on them. We are humbled to be recognized with four prestigious Peabody Awards.”

Learn more about the POV nominees below.

About The Distant Barking of Dogs by Simon Lereng Wilmont

The Distant Barking of Dogs follows the life of 10-year-old Ukrainian boy Oleg over a year, witnessing the gradual erosion of his innocence beneath the pressures of the on-going war in Eastern Ukraine. Having no other place to go, Oleg and his grandmother Alexandra stay and watch as others leave the village,showing just how crucial—and fragile—family is for survival. Shortlisted for Best Documentary Feature for the 91st Academy Awards.

About Inventing Tomorrow by Laura Nix

Passionate teenage innovators from around the globe create cutting-edge solutions to confront the world’s environmental threats—found right in their own backyards—while navigating the doubts and insecurities that mark adolescence. These inspiring teens prepare their projects for the largest convening of high school scientists in the world: the Intel International Science and Engineering Fair. Official Selection, 2018 Sundance Film Festival.

About Midnight Traveler by Hassan Fazili

When the Taliban puts a bounty on Afghan director Hassan Fazili’s head, he is forced to flee with his wife and two young daughters. Capturing their uncertain journey, Fazili shows firsthand the dangers facing refugees seeking asylum and the love shared between a family on the run.

About The Silence of Others by Almudena Carracedo & Robert Bahar

The Silence of Others reveals the epic struggle of victims of Spain’s 40-year dictatorship under General Franco as they continue to seek justice four decades into democracy. Filmed over six years, the film follows the survivors organizing the groundbreaking “Argentine Lawsuit” to fight a state-imposed amnesia of crimes against humanity, where the emotional court battle uncovers a country still divided over its fascist history. Shortlisted for Best Documentary Feature for the 91st Academy Awards. Winner, 2019 Goya Award for Best Documentary Film. A co-production of ITVS. Co-presented with Latino Public Broadcasting (LPB).

Two other POV films were nominated in the Documentary category: América by Erick Stoll and Chase Whiteside and Roll Red Roll by Nancy Schwartzman. For a complete list of all Peabody Award winners and nominees, visit http://www.peabodyawards.com.

Produced by American Documentary, POV is the longest-running independent documentary showcase on American television. Since 1988, POV has presented films on PBS that capture the full spectrum of the human experience, with a long commitment to centering women and people of color in front of, and behind, the camera. It was on POV that American television audiences were introduced to groundbreaking works like Tongues Untied, The Act of Killing and American Promise and innovative filmmakers such as Jonathan Demme, Nanfu Wang and Laura Poitras. In 2018, POV Shorts launched as one of the first PBS series dedicated to bold and timely short-form documentaries.