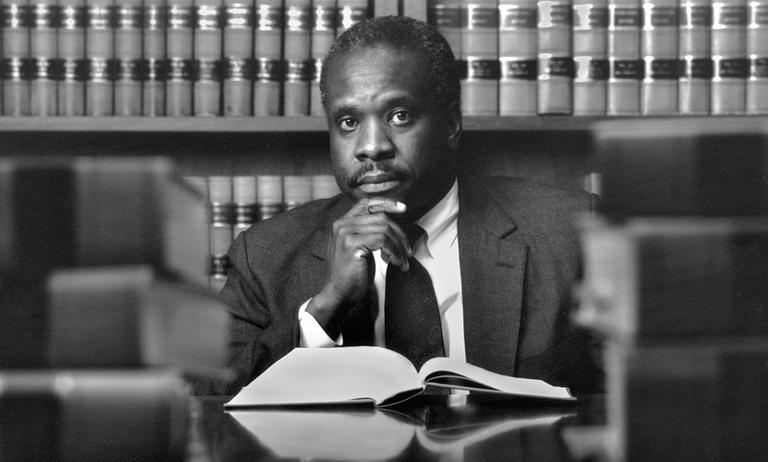 A rare look into the life and perspective of Supreme Court Justice Clarence Thomas.

A rare look into the life and perspective of Supreme Court Justice Clarence Thomas as he discusses his life, legacy and legal theories.

A rare look into the life and perspective of Supreme Court Justice Clarence Thomas as he discusses his life, legacy and legal theories.

Photos from Created Equal: Clarence Thomas In His Own Words

Clarence Thomas (left) and his brother Myers in their school uniforms.

Justice Thomas graduating from Yale Law School in May, 1974.

Courtesy of Diocese of Savannah

Anita Hill, Professor of law at the University of Oklahoma, at a press conference discussing her sexual harassment allegations against Thomas.

Clarence Thomas and Jamal in the mid–seventies.

Clarence Thomas and his new wife Virginia displaying their marriage license on their wedding day May 30, 1987.

In 1948, Clarence Thomas was born into dire poverty in Pin Point, Georgia. His father abandoned the family when Thomas was two. His mother, unable to care for two boys, brought Thomas and his brother, Myers, to live with her father and his wife. Thomas’ grandfather, Myers Anderson, whose schooling ended at the third grade, delivered coal and heating oil in Savannah. He gave the boys tough love and training in hardwork. He sent them to Catholic school.

From there he entered the seminary, training to be a priest. Angered by his fellow seminarians’ racist comments following the assassination of Martin Luther King, Jr. and disillusioned by the Catholic Church’s general failure to support the civil rights movement, Thomas left. His disappointed grandfather kicked him out of the house but the College of the Holy Cross in Massachusetts offered him a full scholarship. There, he helped found the Black Student Union and supported the burgeoning Black Power Movement. Then, Thomas’ views began to change, as he saw it, back to his grandfather’s values. He judged the efforts of the left to help his people to be demeaning failures. He watched the busing crisis in Boston tear the city apart. Why, Thomas asked, pluck poor black kids out of their own bad schools only to bus them to another part to bad white-majority schools?

At Yale Law School, he felt stigmatized by affirmative action, treated as if he were there only because of his race. After graduating, he worked for then State Attorney General John Danforth in Missouri, eventually working in the Reagan administration, first running the Civil Rights Division of the Department of Education and then the Equal Employment Opportunity Commission. In 1990, he became a judge on the U.S. Court of Appeals for the District of Columbia Circuit.

In 1991, President George H.W. Bush nominated Thomas to the Supreme Court. When he was on the verge of being confirmed, a former employee, Anita Hill, came forth to accuse him of sexual harassment. The next few days of televised hearings riveted the nation. Thomas accused the Senate of running “a high-tech lynching for uppity blacks.” Although the American people believed Thomas by more than a 2-1 margin, he was confirmed by the closest margin in history, 52-48. In his 25 years on the Court, Thomas’ jurisprudence has often been controversial — from his brand of originalism to his decisions on affirmative action and other hot button topics.