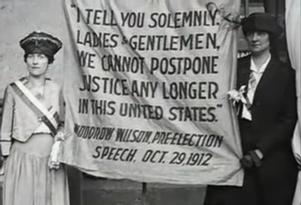 Young women today are lucky enough to enjoy the right to vote thanks to the bravery of the feminists who came before them to fight for that right just over one hundred years ago. It is important for us to look back on this movement with gratitude and remember what it was like for women who had to push for something that nowadays seems like such a basic freedom. Continuing our celebration of Women’s History Month, we have put together a collection of past episodes that touch on the Women’s Suffrage Movement both here in the United States and in the United Kingdom.

The End of The Fight:

In this episode from March 2019, Bonnie Erbé and panelists Del. Eleanor Holmes Norton (D-DC), Tiana Lowe, Megan Beyer, and Rina Shah discuss Tennessee’s integral role in finalizing the ratification of the 19th Amendment, finally giving women the right to vote. The book that prompts their discussion, called The Women’s Hour, details how suffragettes in Tennessee saw an opportunity to make their state the 36th and final state needed to secure the right to vote. Author Elaine Weiss came on the show to talk about the book and how the fight for ratification was a stubborn and violent one.

You can watch that segment here, starting at minute 13:07.

On a special 2016 episode of To The Contrary, Bonnie Erbé visited the historic Belmont Paul Women’s Equality National Monument, the final headquarters of the National Woman’s Party. The 200-year-old home sitting on Capitol Hill in Washington D.C. was declared a national monument by President Barack Obama in 2016 for its overwhelming significance in the Women’s Suffrage Movement. Bonnie reports on Alice Paul, a prominent advocate for the 19th Amendment who used her previous experience fighting for the same rights in England and was a co-founder of the National Women’s Party. Paul and other suffragettes lived in this house at the time, and the building became the first feminist library in the country. Bonnie got the chance to review the house’s collection of documents dedicated to their push for the 19th Amendment.

Click here to watch that documentary episode and learn more about the movement.

America certainly has a long way to go for women’s equality, but it is far from the only country that struggles with the issue. In the United Kingdom, women were taking on the same fight, and the timing of the movement there coincided nicely the Women’s Suffrage Movement in the United States. British women over thirty secured their right to vote in 1918, and while they did not match the voting rights of men until 1928, this initial victory had a profound influence on the success of the 19th Amendment in the U.S. just two years later. A film titled “Suffragettes” directed by Sarah Gavron tells a story of the women in the U.K. demanding the right to vote and the backlash they faced in doing so. We interviewed Sarah Gavron about her inspiration for the film and to hear what it was like working on the project with Hollywood star Meryl Streep.

To watch our TTC Extra of Sarah Gavron, click here, and to watch our panelists discuss the film, click here and skip to minute 17:23.