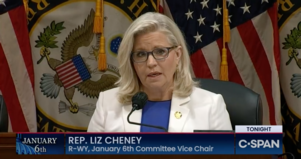 Forty feet. Armed rioters who breached the Capitol on January 6, 2021, were a mere 40 feet away from the Vice President while chanting, “Hang Mike Pence.” This terrifying day in the United States is perhaps the greatest threat seen to American democracy, and women are on the front lines of the fight for truth.

As reported by the New York Times, Liz Cheney, member of the January 6 Congressional Committee, recently recalled, “‘Every time I see it, it brings to mind the image of Jimmy Scott, the Secret Service agent who evacuated my dad down the steps,’ Ms. Cheney said, recalling how Vice President Dick Cheney was rushed to an underground bunker as a hijacked airplane hurtled toward the nation’s capital on Sept. 11, 2001. ‘That evacuation was because Al Qaeda was targeting Washington, D.C., and Mike Pence was evacuated because a violent, armed crowd that Donald Trump had sent to the Capitol was invading the Capitol.’”

Liz Cheney, Republican Representative from Wyoming, helped pave the way in the fight for truth to be upheld after January 6. Cheney has helped uncover key details from the insurrection, undeniably placing blame on key figures in the Trump administration, and even more so, on Donald Trump himself. Cheney has recognized that her move to uncover the facts from January 6 has a strong potential to cost her the political career she has built since first being elected in 2016. Yet, Cheney stated, “I believe this is the most important thing I’ve ever done professionally, and maybe the most important thing I ever do.”

The consistent courage displayed by Liz Cheney throughout the January 6 hearings has encouraged more women to feel comfortable to come forward with allegations against Trump’s actions, or lack thereof, on January 6.

Cassidy Hutchinson, former aide to Trump chief of staff Mark Meadows, showed bravery when coming forward to testify against Trump with vivid details that shocked the nation. The detail of her testimony was compelling, stating that the President defied his Secret Service advisors and became angry enough to attempt to overtake the steering wheel of the limousine. Additionally, she stated that Trump was so outraged he threw and shattered a plate of food against a wall in the White House dining room. These recollections show how Trump was inciting a dangerous mob, and Hutchinson was compelled to defend democracy.

Immediately after the hearing in which Hutchinson testified, Trump utilized an interview with NewsMax to attack the aide. Unsurprisingly, Trump denounced Hutchinson’s credibility, crafting a narrative that he did not know her and that she has “mental problems.” In his interview, Trump avoided questions about January 6, and instead focused on the 2020 election he still deems was stolen and rigged.

Hutchinson, a 26 year-old woman, who was placed in the spotlight of the hearings and in which her job was to defend the truth on one of the darkest days in American history, shows courage as a woman and helps to separate conservatism from the Trump cult mentality.

Another key female witness from the January 6 hearings is Sarah Matthews, former Deputy Press Secretary during the Trump administration. After resigning at the conclusion of the January 6 insurrection, Matthews felt it her duty to uphold the truth from that day. But, this did not come without backlash from the GOP.

Even before Matthews began testifying, the House Republican Conference criticized her character and legitimacy. Moreover, nothing was mentioned about the man testifying directly beside her, Matthew Pottinger. Throughout the hearings, women have been held to a double standard and have seen higher rates of scrutiny.

In a news analysis piece, the New York Times concluded, “But Mr. Trump’s targeting of her [Matthews] and Ms. Hutchinson was in line with how the former president has often publicly treated women who challenge him, criticizing them in personal terms intended to call into question their credibility, sanity and self-worth.”

Women have been forced to explain more, prove more, and defend more than their male counterparts.

The testimony from women in the January 6 hearings are especially significant for the Republican party. The ways in which each Republican woman has come forth into the highly politicized hearings and into the direct path of Trump’s social media fits has shown how female conservatives are shifting mindsets.

Trump continues to lie about the election, and offers false claims that he is ahead in every poll. And in each hearing, women continue to uncover the truth. Conservative women tend to be less likely to draw attention to an unequal gender dynamic, but Cheney, Hutchinson, and Matthews are opening the door for a new understanding of women in the GOP.

While the midterms will play a large role in determining the lasting impact of the hearings, they already have tangible impacts. On August 2, a federal judge denied Trump immunity from three civil lawsuits on behalf of Capitol Police officers blaming him for the injuries sustained on January 6.

Liz Cheney, Cassidy Hutchinson, and Sarah Matthews have faced Trump’s scrutiny, risked their careers, and been under a harsh spotlight in the media. But, their work and honesty will have a lasting effect on the country. Today, we can thank these women for shedding a bright and vibrant light on a dark day in the history of the United States of America.